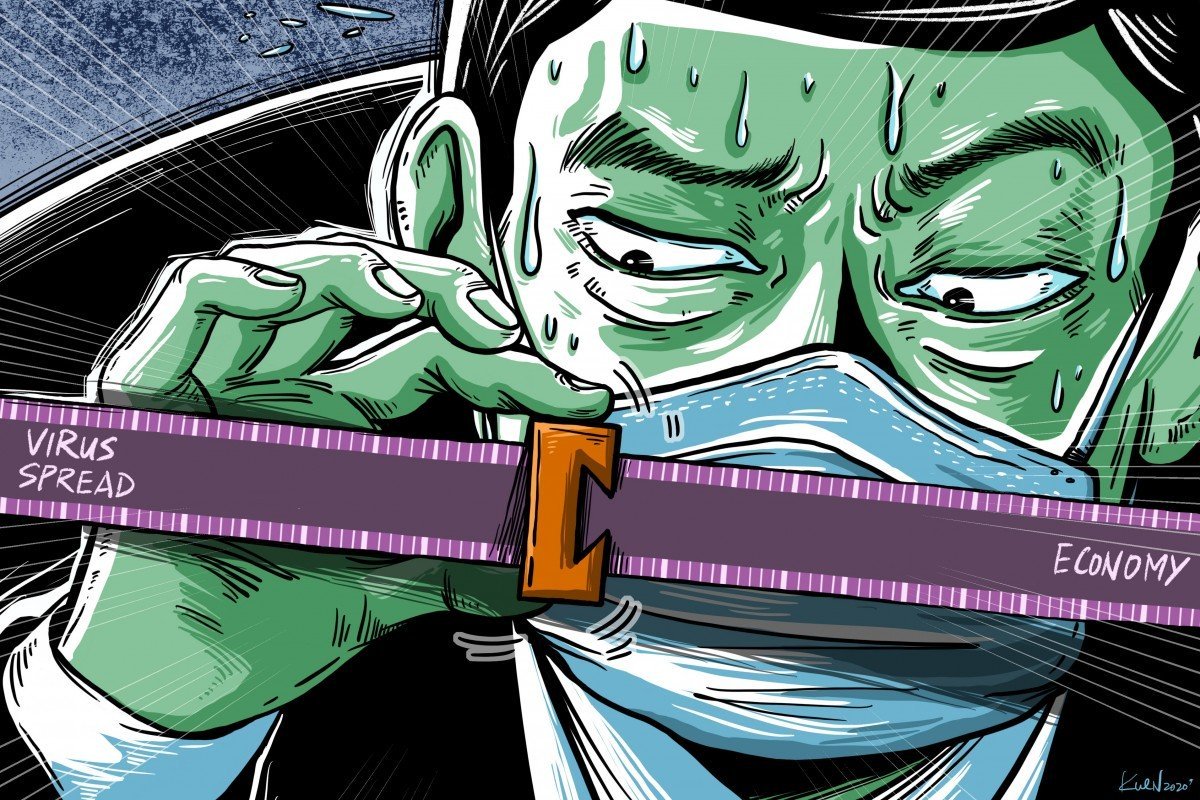 Most Chinese companies will resume operations this week, but the coronavirus outbreak is still raging and it’s far from business as usual. Transport restrictions, supply chain disruptions and new workplace rules to minimise the risk of transmission all cloud the short-term economic outlook

To work or not to work – that is proving a crucial question for Chinese officials, companies and employees as the world’s second largest economy struggles to balance the risk of the deadly coronavirus with the need to resume business.

Most provinces across China restarted operations on Monday after an extended Lunar New Year holiday, but an influx of workers returning from their hometowns is posing a headache for authorities.

The coronavirus, which has killed more than 1,100 people and infected nearly 45,000, shows few signs of being contained, stoking fears of a potential spike in infections as people return to work.

While the central government has made it clear that containing the outbreak is an overriding priority, Communist Party leaders know they cannot afford to freeze industrial production indefinitely, especially as China’s economy grows at its slowest pace in decades.

But the scale of the public health crisis facing the country is immense. Some 160 million people will be returning from their hometowns this week, the Ministry of Transport said, putting pressure on local governments, particularly in thriving coastal regions with large numbers of migrant workers.

East coast manufacturing hubs like Shanghai, Suzhou and Hangzhou, as well as Shenzhen and Dongguan in the Greater Bay Area, face the most pressure from returning migrant workers, according to Li Xunlei, chief economist at Zhongtai Securities and a government adviser.

“Shenzhen has the largest population mobility, with many business travellers and migrant workers, and its new permanent residents have increased rapidly in the past three years,” Li said in a note. “[In Shanghai] the population base is the largest in the country. As an economic, financial, trading, and shipping centre, the scale of migration remains large, and a lot of [workers] came from Henan and Anhui provinces that had serious virus infections.

“These two major cities will face the test of a further spreading of the virus due to the movement of [workers] … so they must take a variety of precautionary measures.”

The Shanghai government has said it would order migrants with no place of residence or specific jobs to return to their hometowns. It also encouraged flexible work arrangements in industries such as information technology and scientific research so people could work from home.

Seventy per cent of manufacturers and more than 80 per cent software firms in the financial hub had resumed operations this week, although most employees were working from home, a government survey showed. Most American companies in the city also planned to introduce mandatory work from home policies, according to a survey of 127 firms by the American Chamber of Commerce in Shanghai.

As the virus has spread from Hubei’s provincial capital Wuhan, authorities across China have imposed travel restrictions, cancelled public events and locked down neighbourhoods.

Last week, the government of Suzhou, a major manufacturing hub in Jiangsu province, which is known for its silk products, asked local communities to tell workers from Hubei and Zhejiang provinces not to return until further notice. This employee “blacklisting” was echoed by other cities, including Wuxi in the south of Jiangsu, which banned migrant workers from at least seven provinces.

While most provincial level governments have urged companies to resume operations this week, officials at local levels are dragging their feet.

The city governments of Zhongshan and Foshan in Guangzhou province have postponed the resumption of work until March 1, while companies must apply for special permission in Hangzhou, the capital of Zhejiang province. Once approved, employees are required to report their body temperatures to local authorities daily.

The local administration has so far only given the green light to 1,462 out of nearly 30,000 companies based in the city, an approval rate below 5 per cent.

Small and medium-sized enterprises in China, which are a cornerstone for employment and social stability, are at most risk from the efforts to contain the outbreak.

A recent survey conducted by researchers from Tsinghua and Peking universities in Beijing, two of China’s top institutions of higher learning, found that 67.1 per cent of small and medium-sized enterprises had only enough financial reserves to sustain operations for two months if revenues dried up. The survey of 995 companies also found that 30 per cent expected revenues to shrink by at least half from 2019.

Some 24 per cent of US businesses in Shanghai estimated revenue could drop at least 16 per cent this year compared to 2019, according to the AmCham survey.

But even if businesses want to restart operations, they face penalties for doing so without official approval. Two electronics firms in Shenzhen have had operations suspended for more than a month, while the manager of a tech firm in Hangzhou was detained on Sunday and his business suspended for hiding information from the government to get approval to restart operations last week. Officials said he did not report business travel to areas that had high infection rates.

For companies that have been able to resume, it may still be one to two months before they return to full capacity, partly due to supply chain issues, said Hua Changchun, chief economist from Guotai Junan Securities. Hua’s team estimated the virus could knock 1.2 percentage points off gross domestic product growth in the first quarter.

“On the supply side, if the epidemic lasts for a long time, it may damage supply chains and export channels, which would be detrimental to the economy in the medium term,” Hua said in a conference call.

Hubei, which has locked down more than a dozen cities home to tens of millions of people, plays an important role in China’s economy as a hub for transport, as well as the car and information technology sectors. A prolonged shutdown of the province could cause a major dent in national supply chains.

Neighbouring Henan province said industrial companies could resume operations on Monday if they employ mainly local staff and use locally-sourced supply chains. Others that sourced employees or materials from virus-hit regions could not start again until at least February 17.

Johnny Sze Chun-hong, director and vice-general manager of toy manufacturer Eastcolight, said he would not restart production until February 24 to wait for upstream suppliers.

“We think it will be safer to wait another week. Some employees still cannot come back to the factory yet because of transport difficulties and we also have to wait for other supply chain factories to start, as we are almost at the end of the production line,” said Sze, whose company is based in Zhongshan, a city in southern Guangdong province.

A slew of multinational companies, including Adidas and fast food chains Yum China and KFC, have closed offices and shut stores in China, but others are slowly restarting output.

Foxconn Technology Group resumed part of its production on Monday at its main iPhone-assembly site in the eastern central Chinese city of Zhengzhou after it was given approval.

Meanwhile, China’s biggest buyer of liquefied natural gas, CNOOC, told suppliers it would not honour some contracts due to unforeseeable circumstances, referring to the coronavirus.

Even for the companies who are able to start again, hurdles ranging from staff quarantines to health checks await.


Arthur Lee Kam-hung, chief executive of Hong Kong X’tals, an electronics manufacturer, said he was unexpectedly told his employees had to be quarantined in their dormitories for seven to 14 days after returning to his factory in Huizhou in southeastern Guangdong.

“It is a really big mess. Originally we had planned for a quarter of our workers to start work on [February 10] and the rest to resume from the 12th,” Lee said.

“We were really caught by surprise by the extra seven days of waiting, which will make things very tough for us. Our international customers are complaining about product delivery.”

When his factory does finally open, Lee said he was not too worried about contagion because of the preventive measures in place. Workers would be wearing masks, temperatures would be checked twice a day and employees running a fever would be told to go home. The government was also helping with health training and monitoring the factory’s workers.

“It's OK as long as we have masks. But masks are another worry as we only have enough stock to last for another two weeks.”