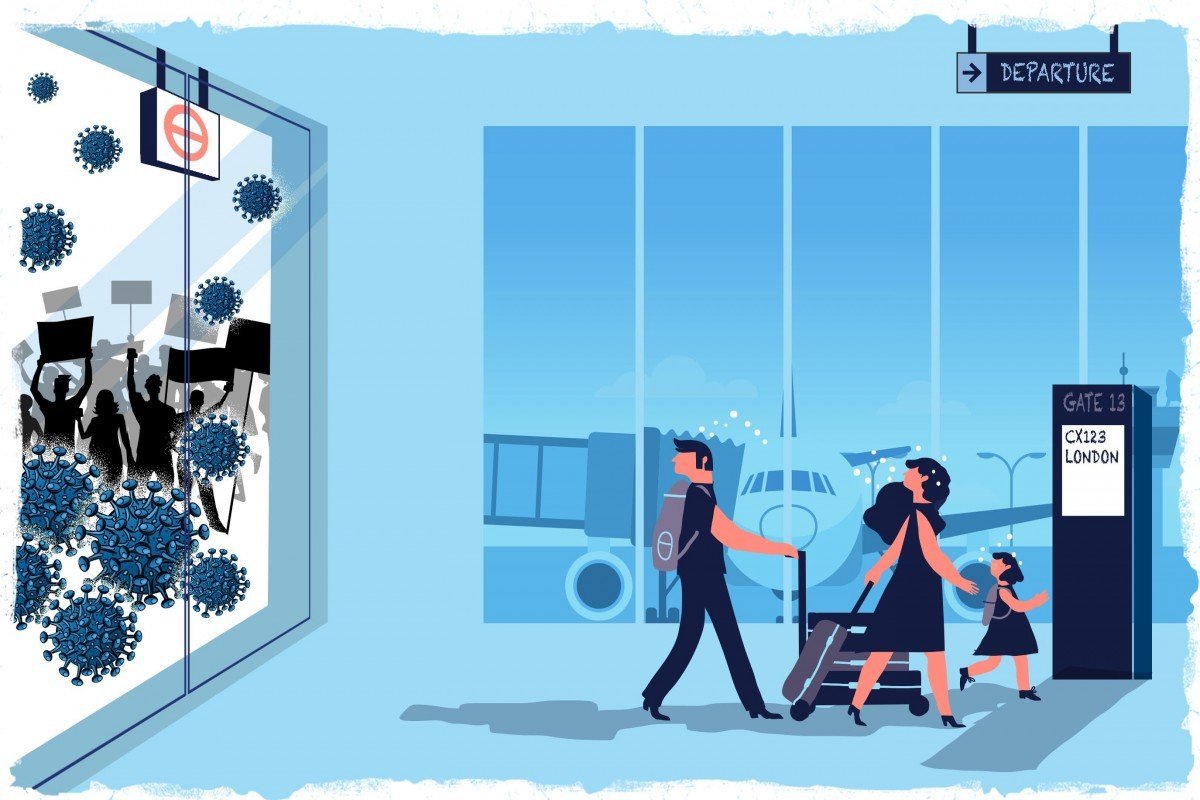 Leaving Hong Kong: how coronavirus, anti-government protests soured the expat dream, in a bitter blow for the city’s talent pool

Weary from the coronavirus fallout and the ongoing threat of violent unrest, Hong Kong migrants and residents consider building a new life elsewhere. American Chamber of Commerce boss says the government is ‘dropping the ball’ as the city’s international appeal takes a knock

After living in Hong Kong for most of her life, Christine Smith-Mann has decided to put her flat up for sale and spend more time in Britain.

“It's a big move,” says the 48-year-old Hongkonger, who will divide her time between the two places after months of anti-government protests and the emergence of the deadly coronavirus in the city.

The health crisis has proved the tipping point for her decision to spend more time in Britain in the coming year, and one that still stands even with the number of confirmed cases there surpassing the Hong Kong total.

Frustrated by the school closures – introduced by the city to contain Covid-19’s spread and extended into late April – Smith-Mann wants her three children to see out their education in England, away from the disruption that has become routine in Hong Kong since the now-withdrawn extradition bill sparked often violent demonstrations last June.

Her 16-year-old daughter is enrolled in a boarding school from September, and her two sons will attend university in England in the autumn – a decision made before the virus, but one she feels has now been validated.

“They’re so restricted in terms of being able to go out safely during the protests. Now with the coronavirus they can’t even be in school with their peers in their last year at school,” says the owner of a public relations and communications consultancy business.

“They have spent probably 80 per cent of their time at home.”

Pointing to the protests as a key factor in her decision, she says: “Every month has been more of a watershed moment for us where we thought, this is affirming our decision to spend more time overseas.”

Her family are not alone in their quest for a new life, with other residents and expats sharing their plans to leave on private social media groups.

Many of them report how the coronavirus, which causes the Covid-19 disease and has heavily disrupted daily life, has allowed them to make up their minds once and for all, capping off the doubts planted by the civil unrest.

“I know a lot of people who are planning to leave next year,” says Jane, who asked not to reveal her real name because she owns a business with 11 staff in Hong Kong.

Her family is among those that have decided to move back to Britain after 15 years in the city.

She believes an exodus is coming over the next 18 months as families make plans on where to send their children for the start of the school year in September 2021.

As well as the impact on education, the coronavirus and protests have taken a heavy toll on many businesses.

Hong Kong’s economy entered its first recession for a decade in October last year, and Financial Secretary Paul Chan Mo-po warned earlier this month of the possibility of further contraction in 2020, as the epidemic hits retailers, restaurants, hotels and other companies hard.

Jane’s distribution business is one of them.

“It started with the protests. I’m in retail all over Hong Kong, so it affected me massively,” says the 47-year-old mother of two. “We got back on our feet and then again the coronavirus has really hit us.”

Anger over the now-withdrawn extradition bill last year developed into a wider anti-government movement focused on democratic reforms and police accountability, leading Jane to believe the underlying issues have not gone away despite relative calm in the first few months of this year.

“I don’t think we are finished with the unrest yet. I feel really sad. It’s very depressing at the moment. The whole appetite and trust in the police … I think it will take a long time to get that back, personally,” she adds.

She is concerned at the prospect of laying off some of her staff, pointing to the squeezed job market.

Her concern is echoed by the city’s recruitment firms, which say the economic downturn has soured expatriates’ desire to work in Hong Kong.

Data obtained by the Post from the jobs website, JobsDB Hong Kong, revealed that from January to February there was a 52 per cent drop in jobs advertised in tourism and travel agencies, with those in hospitality and retail reporting 48 per cent and 40 per cent declines respectively.

“2020 will be a tough year for the job market in Hong Kong,” says Isaac Shao, CEO of JobsDB Hong Kong. “In the face of the recent Covid-19 outbreak in the city, unemployment is set to rise this year to a comparable level, or even worse than that during the outbreak of severe acute respiratory syndrome (Sars).”

“Over the past two months, 45 per cent of our recruitment agency customers have found it difficult to attract expats to Hong Kong roles due to the protests, amid concerns about safety or an employer’s commitment to maintaining a presence there,” says Shan Han, CEO of professional services company Zetl. “Singapore is usually cited as a preferred option.”

Since the outbreak, recruitment consultants reported a drop-off in candidate inquiries for jobs, partly because of hiring managers wanting to meet a job applicant in person before making a decision, but also because of the time it takes for visa approval.

Most of Hong Kong’s 180,000 civil servants returned to their offices this week after a month of working from home, with many in the private sector following suit.

“Typically, it used to take three to six weeks to process somebody’s visa,” says Mark Francis, director of two recruitment consultancies, Silverstrand and Cleverly Search, who added a lot of documentation is still done on paper rather than electronically.

“What we are encountering now is it’s taking anywhere from nine to 12 weeks, which is an incredibly long time … for someone to be sitting on the sidelines just waiting on their visa. There is a huge backlog, which will take time to clear.”

The protests and the epidemic have become the catalysts for local residents, already mulling a move, to accelerate their departure, says Piya Narang, managing director of Swift Relo, an international moving company.

February is normally the quietest month because of Lunar New Year, but Narang reported sales have more than doubled compared with the same period last year.

“This year it’s been a big twist for us. We’re fully booked every single day for removals. It’s basically like a summer period for us now,” Narang says, adding that the United Kingdom, United States, Australia and Malaysia are the top destinations for migrants.

An influential American business group warns the protests together with the coronavirus and school closures have bruised Hong Kong’s once solid-gold reputation.

“One major complaint in the business community is a lack of a visionary communication and government leadership as to how Hong Kong can recover and reshape itself. It’s simply dropping the ball,” says Tara Joseph, president of American Chamber of Commerce in Hong Kong (AmCham), which has about 1,400 members.

However, Joseph says the city still has many benefits for businesses, such as its solid infrastructure, connectivity with Asia and the rest of the world, along with the rule of law, and freedoms of speech and assembly, which “may feel under threat but … are still largely intact”.

This sentiment is echoed by Sue Thomas, who left her job as vice-principal of a secondary school in Discovery Bay to start a consultancy business in September last year, during the height of the protests.

“I arrived in Hong Kong just after Sars,” says the 55-year old. “I think Hong Kong is a very resilient community. It’s shown that it can bounce back. It’s going to take a while to recover, but I think it will.”

Experts warn they expect the protests to pick up again in the summer, which will further scare foreign workers from wanting to move to Hong Kong.

“We think there is a perfect storm on the back of last year’s protests, the fact we are in a recession, then this coronavirus,” Francis says. “It’s kind of like a triple whammy and it seems to be affecting a lot of candidate sentiment.”

For Christine Smith-Mann, she believes the events of the past nine months have irrevocably changed the city where she was born.