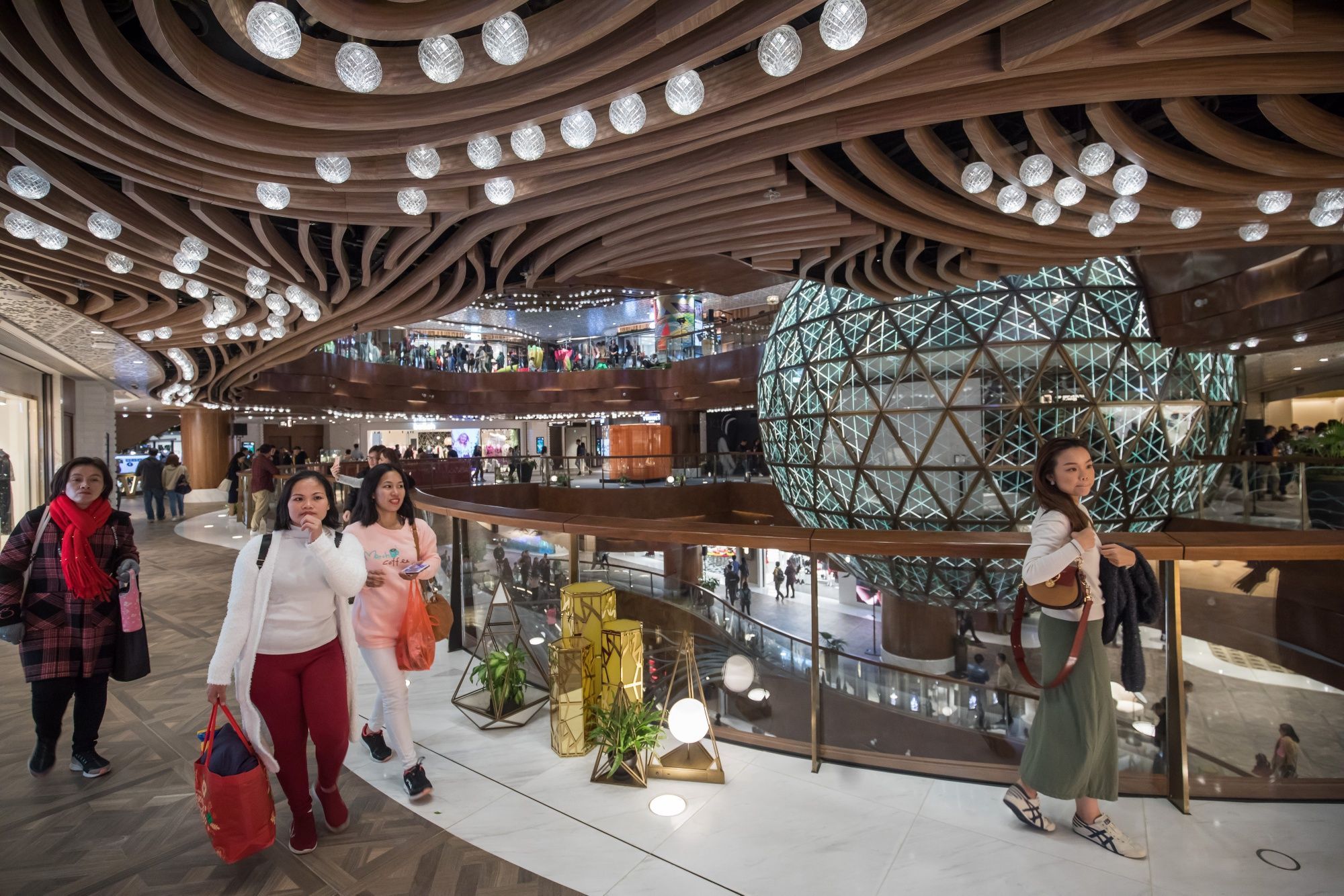 From building Hong Kong’s largest shopping mall to constructing a sprawling $3.9 billion sports center, Adrian Cheng has been one of the most aggressive property investors in town. It’s a costly expansion strategy that’s now poised to test one of the city’s oldest real-estate empires.

Cheng, 40, became chief executive officer of New World Development Co. in May, cementing his position after taking over from his father Henry a few years ago.

But even as he ascended to the top, Cheng championed ambitious real-estate developments in the financial and tourism hub worth about $5 billion.

Conceived on the assumption mainland Chinese visitors would continue to throng Hong Kong, they now mean the family is exposed to some of the city’s largest projects at a time when the coronavirus pandemic and political unrest is crippling its economy.

Few names are more synonymous with Hong Kong than the Chengs. New World built and operates the convention center where Prince Charles handed over Hong Kong to China in 1997, and the family also controls Chow Tai Fook Jewellery Group Ltd., which has jewelry stores across the city.

Unlike the family of Li Ka-shing, Hong Kong’s richest man, which steadily reduced its exposure to the city over the past decade, New World still gets two thirds of its HK$76.8 billion ($9.9 billion) in annual revenue from Hong Kong, and the big developments underway are set to entrench them further.

A Harvard graduate and former Goldman Sachs Group Inc. investment banker, Cheng is now trying to pivot New World beyond Hong Kong’s shores, setting his sights across the border in Guangdong, where the Chinese government is promoting its vision of a “Greater Bay Area” integrating the city with Shenzhen, Guangzhou and other metropolises in the Pearl River Delta.

But New World’s mainland plans, including more than 17 billion yuan ($2.5 billion) in spending on several projects, along with its building spree in Hong Kong have left it with a debt-to-equity ratio of 42% -- the highest among the city’s biggest developers.

That bet needs to pay off, especially as Beijing’s tightening grip on Hong Kong limits investment options elsewhere for its tycoons.“We want to be the leading and the largest Hong Kong developer in the Greater Bay Area,” New World’s Deputy Chief Financial Officer Edward Lau said in an email. “We have a significant capex and growth plan.”

To fund his China strategy, Cheng is borrowing money and selling assets. His shift shows the challenges faced by the new generation of Hong Kong tycoons - from Li Ka-shing’s son and successor Victor Li to the Lee brothers who now run Henderson Land Development Co., the city’s third-largest property empire by market value - as China’s growing heft in the former British territory upends the business landscape their fathers built their fortunes on.

While its gaze may be swiveling to the mainland, New World’s long-running focus on Hong Kong has meant some of its most costly building projects are coming to fruition just as the wider political uncertainty puts a question mark over the city’s future.

As executive vice-chairman in 2018, Cheng helped win a bid to build and operate a 28-hectare sports complex at the site of Hong Kong’s old airport, including a 50,000-seat stadium and 10,000-seat arena. It is targeted for completion in 2023.

While the local government will fund the building cost of HK$30 billion, New World will cover all future operating costs and pay the government 3% of the complex’s gross income.

Cheng also spearheaded New World’s successful bid in May 2018 for a HK$20 billion shopping-and-entertainment complex at the airport. The 3.77 million-square-foot Skycity, scheduled to open in phases between 2023 and 2027, will include the biggest mall in Hong Kong, but is being built as retail sales in the city continue their year-long slump and tourism is almost non-existent given the virus border curbs.

An arts patron who’s on committees of museums in New York, London and Paris, Cheng also drove the re-development of New World Centre, a group of drab 1970s buildings in Hong Kong’s Kowloon district, into Victoria Dockside, a $2.6 billion office and commercial project which includes an art and culture complex.“It’s impressive that New World won a lot of contracts, mostly related to Adrian Cheng’s energetic and aggressive style,” said Simon Lee, co-director of the international business and Chinese enterprise program at the Chinese University of Hong Kong.“But New World paid lots of money in getting those contracts and we don’t know if the tourism market will rebound.”

That uncertainty is likely to be reflected in New World’s earnings, due to be reported next week. As the pandemic batters its businesses, adjusted net income in fiscal year ended June is likely to drop about 12% from 2019 to HK$7.9 billion, the steepest slide since 2011, according to the average of 12 analysts’ estimates compiled by Bloomberg. The profit drop could be worse than the estimates on lower sales, according to a Bloomberg Intelligence report published Thursday.

New World declined to make Adrian Cheng available for an interview.The Hong Kong that Cheng is operating in is a different place to the boom town where his grandfather Cheng Yu-tung got his start.

The company patriarch was an apprentice at the Macau gold shop of a family friend, Chow Chi Yeun, who founded Chow Tai Fook.

He then married Chow’s daughter and eventually used the profits from selling gold to get into the property market, founding New World in 1970. These days, his son Henry, still New World’s chairman, is Hong Kong’s second-richest man with a $20 billion fortune.

The Chengs have made efforts over the years to diversify out of Hong Kong, but with mixed success. A partnership with Donald Trump to build the Riverside South buildings on Manhattan’s West Side soured, with Trump filing an unsuccessful lawsuit.

The Hong Kong investors eventually sold the project. The Chengs have bought an Irish plane leasing company, an Australian utility and a resort in the Bahamas.

Now any expansion out of Greater China is likely to be even more difficult for Adrian Cheng. The national security law introduced by Beijing earlier this year – which gives Hong Kong’s government new powers to go after the opposition – has further increased tensions between China and the West.

Countries such as the U.S., U.K. and Australia are strengthening scrutiny on deals involving companies with links to China. Henry Cheng was one of several tycoons who expressed support for the new law ahead of its approval by the National People’s Congress.

“In the past, people thought diversification was good, but now there are risks in overseas markets,” said Raymond Cheng, an analyst at CGS-CIMB Securities, who has an add rating for New World’s stock. “If Hong Kong-based companies want to invest overseas, they will be regarded as Chinese companies and it will be more difficult for them do business.

”That means expansion into mainland China probably offers New World one of the few new avenues of growth. New World has invested in six urban redevelopment projects in Guangdong, according to the company, and plans to open 36 of its K11-brand retail and commercial projects in nine mainland cities and in Hong Kong by 2025. It currently has 12 such projects.

Funding such expansion has seen New World sell $1.45 billion of bonds in 2020, about 7% of the record $20 billion in offshore corporate bonds that analysts say were issued by Hong Kong and Macau borrowers this year. The company is raising funds in a strategic way to help it generate returns that exceed the cost of debt, said Lau, the deputy CFO.

Still, it’s borrowing much more than its peers. During the same period, Hong Kong’s other large indebted developers raised a combined $2.2 billion, according to data compiled by Bloomberg.

“This is a lot of U.S. dollar bonds for investors to digest given they are also vulnerable to bad headlines,” said Owen Gallimore, head of credit strategy at Australia & New Zealand Banking Group Ltd. in Singapore. “The New World group has always run with the highest leverage among the Hong Kong property blue chips and more onshore exposure. Bond investors aren’t adequately compensated for the risk at the moment.”

In the fiscal year through June 2020, New World sold more than HK$10 billion in assets, including its stake in a major shopping mall adjacent to the Macau ferry terminal. It recently agreed to sell Hong Kong public bus routes it owns to a consortium of investors for HK$3.2 billion.

New World says it’s targeting to dispose of HK$15 billion of what it calls non-core assets in the fiscal year ending June 2021. These sales are meant to fund Cheng’s bet on a new future. Yet, it’s also one that’s looks more uncertain.

So far, investors seem to be taking a wait-and-see approach. Shares of New World are down 13% in 2020 amid a 22% slump in the Hang Seng Properties Index. Spreads on the company’s 6.25% perpetual bond widened about 116 basis points over the same period, a 28% jump and largely in line with the broader Asian dollar bond market, data compiled by Bloomberg show.

“It’s a testing time for the Cheng family businesses, especially for Adrian Cheng,” said Jackie Yan, a professor who specializes in corporate management and strategy at the University of Hong Kong. “He must be under some pressure to prove the new business model actually works.”