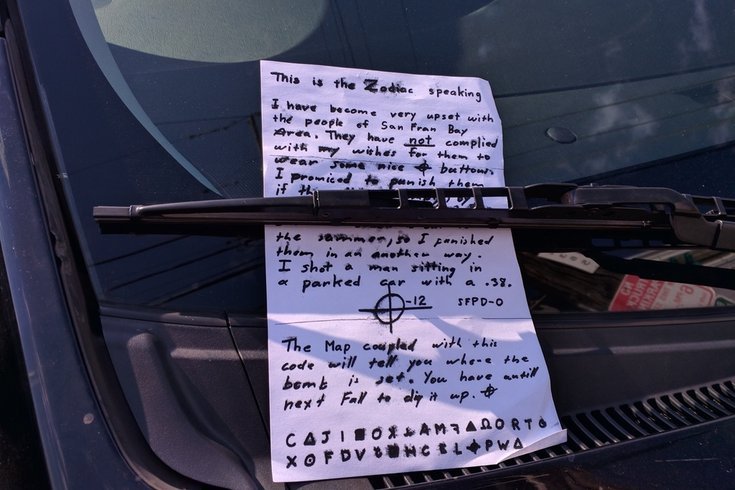 A piece to the puzzle in one of America’s most talked-about unsolved mysteries apparently fell into place as news surfaced Friday that a code in the Zodiac Killer case had been solved by a group of private citizens. Could there soon be new details released in the Zodiac case?

A piece to the puzzle in one of America’s most talked-about unsolved mysteries apparently fell into place as news surfaced Friday that a code in the Zodiac Killer case had been solved by a group of private citizens.

The FBI San Francisco Division on Friday announced it is aware and investigating reports that a written puzzle from the Zodiac case – known as the 340 Cipher – was apparently cracked. The message was originally sent to the San Francisco Chronicle more than 50 years ago.

“The Zodiac Killer terrorized communities across Northern California and even though decades have gone by, we continue to seek justice for the victims of these brutal crimes,” the FBI tweeted in a statement. “Due to the ongoing nature of the investigation and out of respect for the victims and their families, we will not be providing further comment at this time.”

Police say at least five people are believed to have been murdered by the Zodiac, although the killer claimed at least 37 victims since 1966 in his letters.

It was hoped that the decoded message might reveal the identity of the killer, but the San Francisco Chronicle reports that no such revelation was made. According to a code-breaker interviewed by the paper, the message simply taunts attempts by investigators to unmask the killer.

“I HOPE YOU ARE HAVING LOTS OF FUN IN TRYING TO CATCH ME. THAT WASN’T ME ON THE TV SHOW WHICH BRINGS UP A POINT ABOUT ME. I AM NOT AFRAID OF THE GAS CHAMBER BECAUSE IT WILL SEND ME TO PARADICE ALL THE SOONER BECAUSE I NOW HAVE ENOUGH SLAVES TO WORK FOR ME WHERE EVERYONE ELSE HAS NOTHING WHEN THEY REACH THE PARADICE SO THEY ARE AFRAID OF DEATH. I AM NOT AFRAID BECAUSE I KNOW THAT MY NEW LIFE IS … LIFE WILL BE AN EASE ON IN PARADICE DEATH.”

Oranchak said in a video about how they cracked the cipher that the final sentence doesn’t “flow quite right yet” and invited others to help figure out how it should read. The message above is the solution the team submitted to the FBI.

The Zodiac would write notes, often threatening to kill, in a cryptogram composed of bizarre series of letters and symbols.

The killer signed the letters with a circle divided by a cross. Subsequent letters began, ″This is the Zodiac speaking.″

The killing spree has since been the subject of numerous theories, podcasts and even major motion pictures.