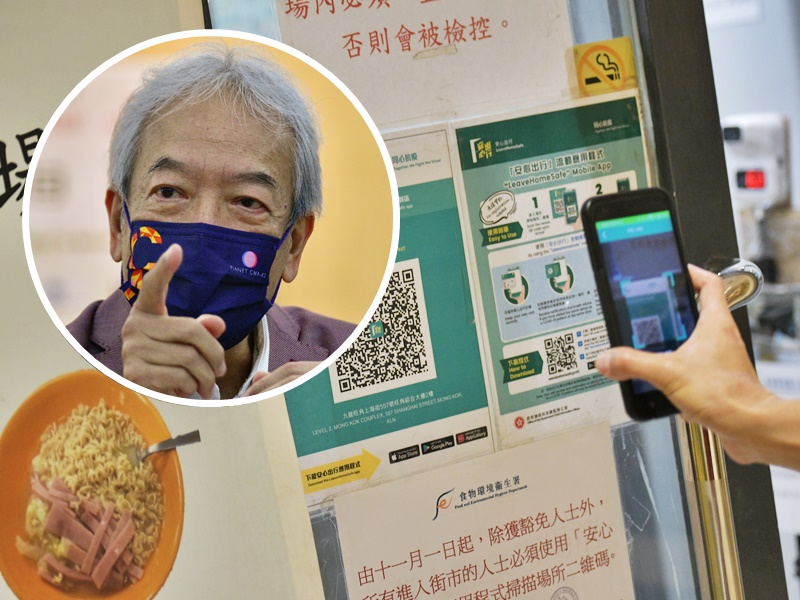 Youngsters aged below 15 may be exempted from LeaveHomeSafe mandate

The government is mulling relaxing the exemption for the LeaveHomeSafe app mandate so that youngsters aged below 15 need not scan the venue's QR code, said catering veteran Simon Wong Ka-wo.
The government earlier ordered all citizens must use the tracing app when entering premises, including restaurants and cinemas starting Thursday next week (Dec 9). Currently, the mandate covers almost all government premises, and only kids under 12 or elderly over 65 are exempt.

Wong, the president of the Federation of Restaurants and Related Trades, said on Saturday that authority reacts positively to granting exemptions to elderly, kids, and disabled citizens.

Now the government is even mulling to relax the age limit for kids eligible for the exemption from 12 to 15, he pointed out, believing the measure can alleviate the industry's concerns.

Wong added only a minority of the population do not own a smartphone and said the exemption arrangement would work for those people.

The government is also exploring the possibility of launching the "vaccine passport" arrangement in restaurants and other premises like gym rooms, which bans unvaccinated citizens from entry.

Wong said he had a chance to meet Chief Executive Carrie Lam Cheng Yuet-ngor yesterday and learned that the arrangement may come into effect after the Lunar New Year holidays.

He noted that the vaccination rate of Hong Kong now stands at about 70 percent, and launching the "vaccine passport" arrangement will definitely affect businesses. He hoped the measure would only be in place when the rate stands at about 80 percent.
#vaccine
Add Comment