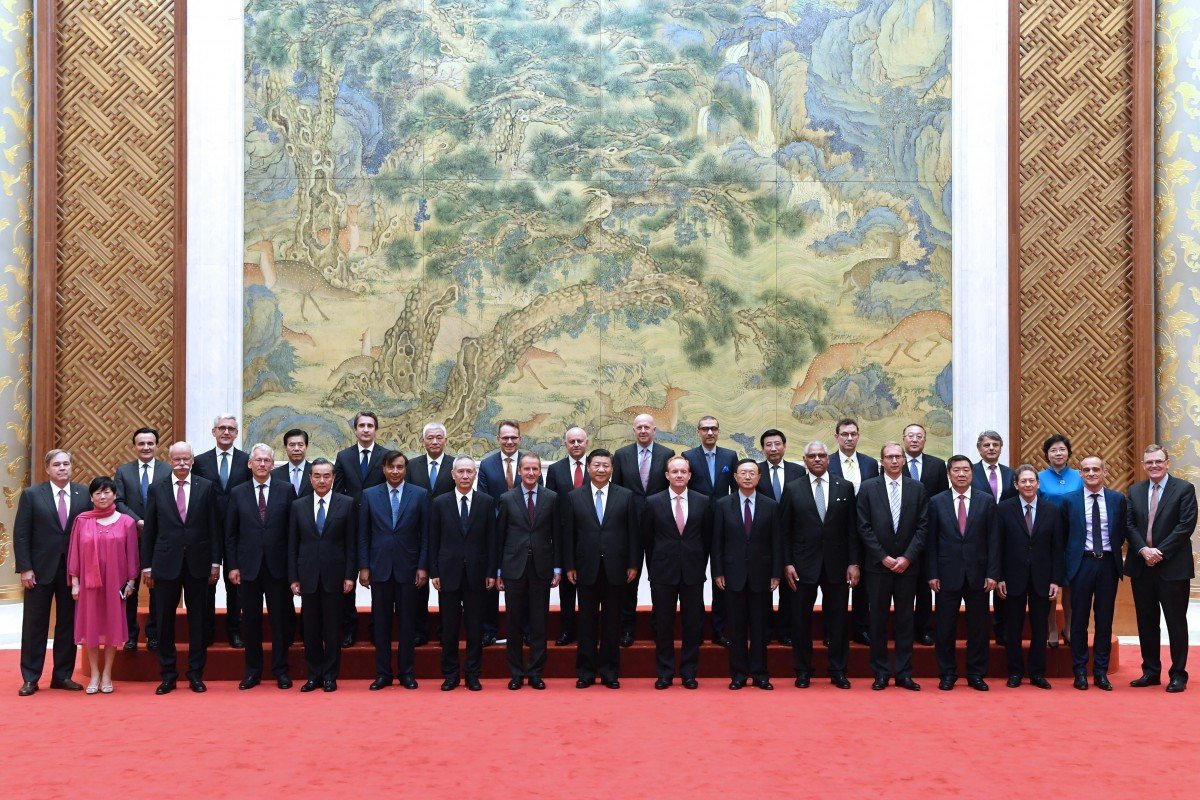 In a letter to the Global CEO Council, Xi Jinping said China will deepen reforms and expand market opening up to create a ‘better’ business environment. China-US tensions have risen again recently over the Hong Kong national security law and Xinjiang, with both Washington and Beijing threatening sanctions

China’s President Xi Jinping has promised that China will stick to its “peaceful development” path, continue reform and deepen the opening of its domestic market in a letter to top international business executives.

In a clear bid to win the hearts and minds of the global business community amid rising tensions with the United States, Xi’s letter to the Global CEO Council stated that the long-term economic fundamentals of the Chinese economy remain sound and “will not change” despite the impact of the coronavirus.

A summary of the letter to the group of foreign business executives was released by the official Xinhua News Agency on Thursday, shortly after China confirmed its economy grew by 3.2 per cent in the second quarter of 2020, rebounding from a historic 6.8 per cent decline in the first three months of the year.

“[China] will provide a better business environment for Chinese and foreign enterprises [to help them] explore new opportunities and new prospects”, Xi wrote in the letter dated on Wednesday. “You’ve made the correct choice of putting down your business roots in China to seek development.”

Xi also promised China will promote an “open” world economy at a time when global businesses are jittery about the rising tensions between Beijing and Washington and the prospect of decoupling between the world’s two biggest economies.

“I hope you will uphold the concept of win-win and joint development to enhance communications and cooperation with Chinese enterprises”, he added in the reply to a letter sent by executives from 18 multinational that are members of the Global CEO Council, who had praised China and Xi’s leadership in controlling the coronavirus outbreak.

On Tuesday, US President Donald Trump signed an executive order paving the way for sanctions against individuals and financial institutions involved in developing and implementing the new Hong Kong national security law.

The controversial law, which came into effect on July 1, authorises the Chinese government to punish those individuals and companies that cooperate with foreign sanctions placed on Hong Kong officials or institutions.

China’s use of punishments against foreign countries like Canada and Australia for actions it deems interference in its domestic affairs has increased concern among foreign firms.

A poll of 200 companies with global supply chains conducted by sourcing specialists Qima in June found that 95 per cent of respondents in the US planned to change suppliers away from China, due to the confluence of current issues and the uncertainty of future trading patterns.

In addition, China’s foreign ministry this week announced that it will sanction US company Lockheed Martin for its arm sales to Taiwan, the disputed self-ruled island that China has vowed to take back – by force if necessary.

Even as tensions with the US have escalated, China has continued to stress it is open for business and that it welcomes foreign investors.

As politicians in Washington and Brussels harden their stances against Beijing, the Chinese government is trying to woo multinational companies with promises of business opportunities to avoid a total breakdown of relations and to maintain its role in global value chains.

However, Beijing’s charm offensive strategy targeting foreign businesses has lost momentum since the imposition of the security law on Hong Kong.

The Global CEO Council, a group of senior executives from 39 big multinational companies, was set up in 2013 by the Chinese People’s Association for Friendship with Foreign Countries, one of Beijing’s diplomatic arms, to improve Beijing’s ties with multinational firms.

Xi held a meeting with delegates from the group in Beijing June 2018, just before the Trump administration started the trade war with China.

American executives from UPS, Pfizer, Cargill, Prologis, and Goldman Sachs, among others, attended the meeting in 2018, during which Xi asked them to help fight “protectionism”.

For some global businesses, the relationship with Beijing remains bumpy. Merlin Bingham Swire, the chairman and executive director of conglomerate Swire Pacific, the largest shareholder in Hong Kong’s flagship airline Cathay Pacific, scrambled to pay a visit to Beijing’s aviation authority in August 2019 after reports that a flight from Newark, New Jersey, to Hong Kong was denied entry into Chinese airspace.

After the trip, Swire Pacific issued a statement offering strong backing for the Hong Kong government amid the city’s protests and fired staff for supporting the anti-government demonstrations.