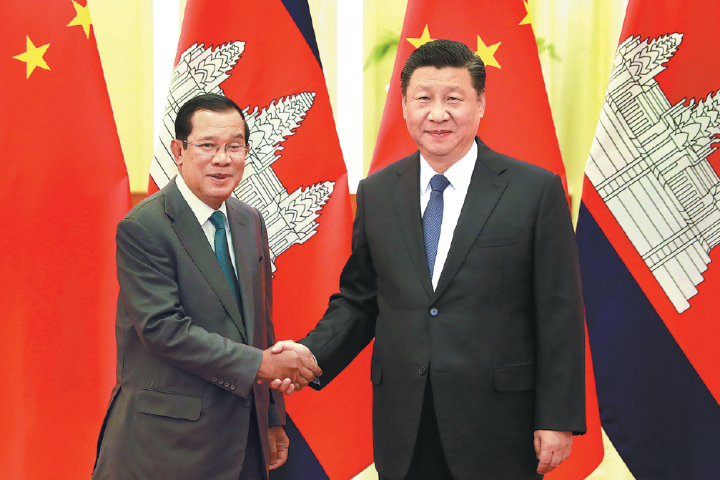 China has the confidence and capability to win the battle on the prevention and control of the pneumonia epidemic caused by the novel coronavirus, President Xi Jinping says on Wednesday.

Xi made the remark while meeting with visiting Cambodian Prime Mi­nister Samdech Techo Hun Sen at the Great Hall of the People in Beijing.

China will continue to maintain an open and transparent attitude to enhance cooperation with all countries, including Cambodia, to jointly deal with the disease and maintain global and regional health security, Xi said.

Noting that Cambodian King Norodom Sihamoni and Queen Mother Norodom Monineath Sihanouk had expressed sympathy and support toward China over the outbreak of the disease, Xi said that the visit of the Cambodian prime minister demonstrated the unshakable friendship between the two countries.

A friend in need is a friend indeed, Xi told Hun Sen, saying that the Cambodian people are standing together with the Chinese people at this special moment.

The Cambodian prime minister's visit to China has shown the core meaning of a community with a shared future for China and Cambodia, which China greatly appreciates, Xi said.

The Communist Party of China and the Chinese government have taken the utmost and strictest measures to prevent and control the disease with a high degree of responsibility for the Chinese people and the international community, Xi said.

These measures have had positive results, Xi said, adding that the Chinese nation has withstood numerous challenges throughout its history.

Xi told Hun Sen that the Chinese government will take good care of Cambodian people living in China, including students, and safeguard their livelihood and health.

China would like to keep enhancing high-level exchanges with Cambodia and take bilateral relations to a new stage, Xi said.

The Cambodian people stand together with the Chinese people in this difficult time, he said, adding that Cambodia appreciates China's attention to the health of Cambodians living in China.

Some countries have taken extreme and restrictive measures to deal with the disease, which is undesirable, Hun Sen said, adding that panic itself is more horrible than the epidemic.

Cambodia will continue with its normal exchanges and cooperation with China to build a community with a shared future for Cambodia and China, he added.

Premier Li Keqiang also met with Hun Sen on Wednesday, during which Li also expressed confidence in winning the battle against the epidemic.

Hun Sen was welcomed by State Councilor and Foreign Minister Wang Yi upon his arrival at Beijing Capital International Airport on Wednesday afternoon.