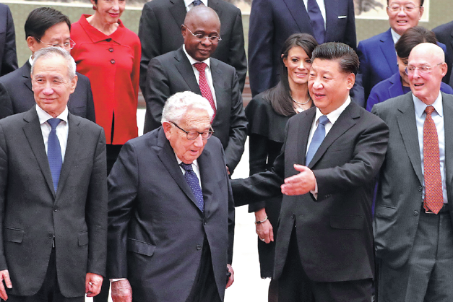 China would like to promote innovation cooperation with all countries, including the United States, to bring more benefits to the people of all nations, President Xi Jinping said Friday.

President says China, US should strengthen their communication

China would like to promote innovation cooperation with all countries, including the United States, to bring more benefits to the people of all nations, President Xi Jinping said Friday.

Xi made the remark while meeting with foreign representatives at the 2019 New Economy Forum at the Great Hall of the People in Beijing.

Innovation outcomes should benefit the whole world rather than being a treasure hidden in a mountain cave, Xi said. No country can be the only center for innovation or exclusively benefit from its outcomes, Xi said.

Given that both China and the US are major centers of innovation, Xi said, they should promote cooperation on innovation.

Xi recalled China's ancient civilization, saying that the Chinese people have never surrendered despite China becoming a semicolonial and semifeudal society after the Opium Wars.

China's remarkable achievements are attributed to the right path — socialism with Chinese characteristics — that fits China's national conditions, follows the trend of the times and wins the hearts of the people, Xi said. He added that the people are confident in staying on the path.

The Chinese Dream of national rejuvenation is not a dream of hegemony, and China will not seek to replace any other country, Xi said, adding that China only strives to restore the country's dignity and the position it deserves.

China will uphold the path of peace and development and be dedicated to cooperation with all other countries, Xi said. China will continue to follow the path of reform and opening-up despite obstacles deliberately set by others, and the obstacles and difficulties will make the country more determined to boost opening-up, he said. China will fulfill its commitment and keep its promises, Xi added.

Belt and Road cooperation has achieved fruitful outcomes, and win-win cooperation through this initiative will not be slowed but will move further in the right direction, he said.

Five representatives, including Henry Kissinger, former US secretary of state, and Henry Paulson, former US treasury secretary, delivered speeches at the meeting. They spoke highly of China's achievements and the country's contributions to global peace and development.

The representatives said protectionism has caused trade frictions, and the world situation is full of uncertainties. China's efforts to boost opening-up are of great significance in promoting sustainable development and stabilizing international relations, they said.

Speakers said that all parties should enhance innovation cooperation to avoid the development of an "economic iron curtain".

The 2019 New Economy Forum, held in suburban Beijing, was attended by over 500 people from the political and business sectors of over 60 countries.

In a separate meeting with Kissinger on the same day, Xi said China and the US should strengthen communication on strategic issues to avoid misunderstandings and misjudgments. The China-US relationship is now at a critical juncture and facing some difficulties and challenges, he said.

Xi said the two nations should act in the fundamental interests of people in both countries as well as the world, respect each other, seek common ground and achieve win-win results through cooperation so as to advance bilateral ties' development in the right direction.

Xi recalled that Kissinger, with profound historical vision and deep understanding of traditional Chinese culture, worked with the leaders of China and the US at the time to promote the normalization of relations between two countries with different national conditions.

The two countries and the world are still feeling the effect of those moves, he said.

The president also praised the 96-year-old veteran diplomat's sincere feelings and active efforts in promoting the development of relations between the two great countries over the years, saying that his significant contribution will be written into history.

Kissinger said he was honored to have visited China almost 100 times over the past 50 years and witnessed the country's earthshaking transformations.

The US-China relationship has kept moving forward despite ups and downs over the past five decades, he said, and now this relationship has become even more important as times have changed.
Add Comment