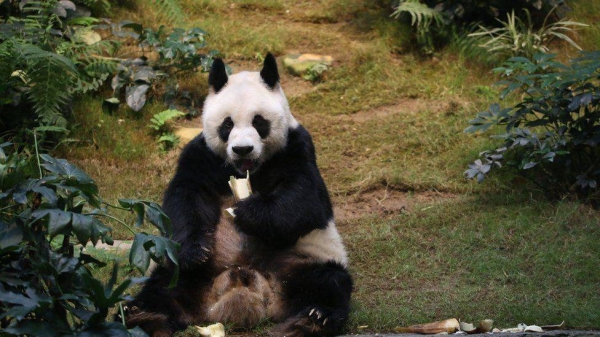 The world's oldest male panda in captivity has died in an amusement park zoo in Hong Kong on Thursday.
The panda, called An An, was euthanized at the age of 35 — the equivalent of a human living till 105.

Officials at Ocean Park say the decision was reached after he showed "steady signs of deterioration" over the past few weeks.

An An, together with its mate Jia Jia, was gifted to Hong Kong from China's central government in 1999.

Ocean Park's authorities said the panda's food intake had declined progressively, until it stopped taking solid food altogether and subsisting only on water and electrolyte beverages

The panda's caretakers also observed his activity levels had declined and its rest periods were getting increasingly longer.

Park officials eventually decided to euthanise the bear "to alleviate the geriatric panda's discomfort," they said in a statement on Thursday.

"An An has brought us fond memories with numerous heart-warming moments. His cleverness and playfulness will be dearly missed," said Paolo Pong, Chairman of Ocean Park Corporation.

Ocean Park has in the past come under criticism, with activists especially calling out its live dolphin performances - which were eventually stopped, though some say this was not enough.

"Ocean Park's decision to end its dolphin shows but to keep the animals as a tourist gimmick is a missed ethical and financial opportunity," Jason Baker, vice president of PETA had then said.

The park continues to keep a large range of creatures, from dolphins to penguins - in captivity.

Born in the wild in Sichuan, An An arrived with his mate in Hong Kong in 1999.

But his female mate, Jia Jia, died in 2016 at the age of 38, becoming the oldest female panda in captivity.

The average life expectancy of the species is below 20 years in the wild, but they can live longer in captivity.

China considers pandas a national treasure, but have loaned them to other countries as a way to forge political friendships across the globe.
Add Comment