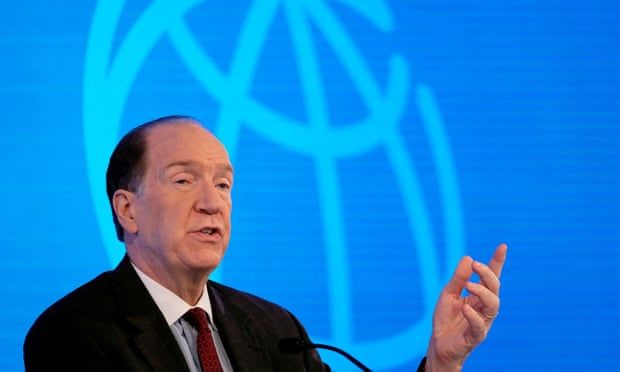 Campaigners say bank should rush to rescue countries facing recession – but can it do so without resulting in mass debt write-offs?
Not since the early 1990s has the world faced such a period of low growth.

Discounting the havoc caused by the financial crash of 2008 and the initial impact of the Covid-19 pandemic, the World Bank says that by the end of 2024 it will have been 30 years since the global economy grew at an average of less than 2% a year.

Worse, the world stands on a “razor’s edge” and risks falling into a recession this year if the situation in Ukraine deteriorates any further or another global crisis emerges.

The poorest will suffer the most. And for that reason the Washington-based development funder is hoping to persuade major donors, and especially the EU, US and China, to widen its lending capacity.

Ahead of its annual meeting in April, which is held in the US capital with its sister organisation, the International Monetary Fund, the World Bank is seeking support for proposals that include a deeper pool of capital to draw on and new lending tools.

This “evolution roadmap” is designed to give the bank more flexibility to meet a series of overlapping crises that the New York university economist Nouriel Roubini, among others, has argued is the new normal.

Wars, famines and the climate emergency will continue to trigger food shortages and energy price spikes that fuel inflation. Interest rates, for so long at near zero, will remain above long-term trends, they say.

The Bank president, David Malpass, hopes to prevent countries that have made huge strides in the last 30 years towards food security and stable public debts from going backwards.

One of the biggest headwinds faced by developing world governments is the increase in debt costs. When most debts are denominated in dollars or euros, the aggressive rate rises by the US Federal Reserve and the European Central Bank matter.

Kenya might be one of the more durable, financially solvent nations in sub-Saharan Africa, but its debt payments are expected to average more than 30% of government revenues this year.

And after two decades of being encouraged to seek loans from international banks – and when that proved expensive, Chinese development banks – the country’s president, William Ruto, who has only been in place since last September, is keen to switch back to borrowing from the World Bank.

Ruto is unlikely to be alone. More than £63bn was spent last year by the 75 countries, many of them in sub-Saharan Africa, that make up the poorest nations, to cover loans taken out mostly over the previous decade.

Malpass wants to increase lending, but without sacrificing the institution’s AAA credit rating. It will be a difficult tightrope to walk.

Private lenders have reduced the pool of developing countries they are prepared to consider for loans. Before the pandemic, one in five countries could borrow privately. Now it is just one in 15.

Malpass would struggle to meet the demand from countries shut out by private lenders without accepting the risk that many governments might default. Debt write-offs would force credit agencies to say the new policy warrants a downgrade.

Anti-poverty campaigners say the World Bank should shrug off the threats of credit agencies and rush to rescue countries that are cutting education and health budgets to meet debt costs, if, like Zambia and Sri Lanka, they are not bust already.

While slow global growth and war in Europe are not going to help the situation, campaigners say escalating debt payments, enriching western banks, are the more immediate problem, and one that Malpass could actually help to solve.
#COVID-19  #Covid
Add Comment