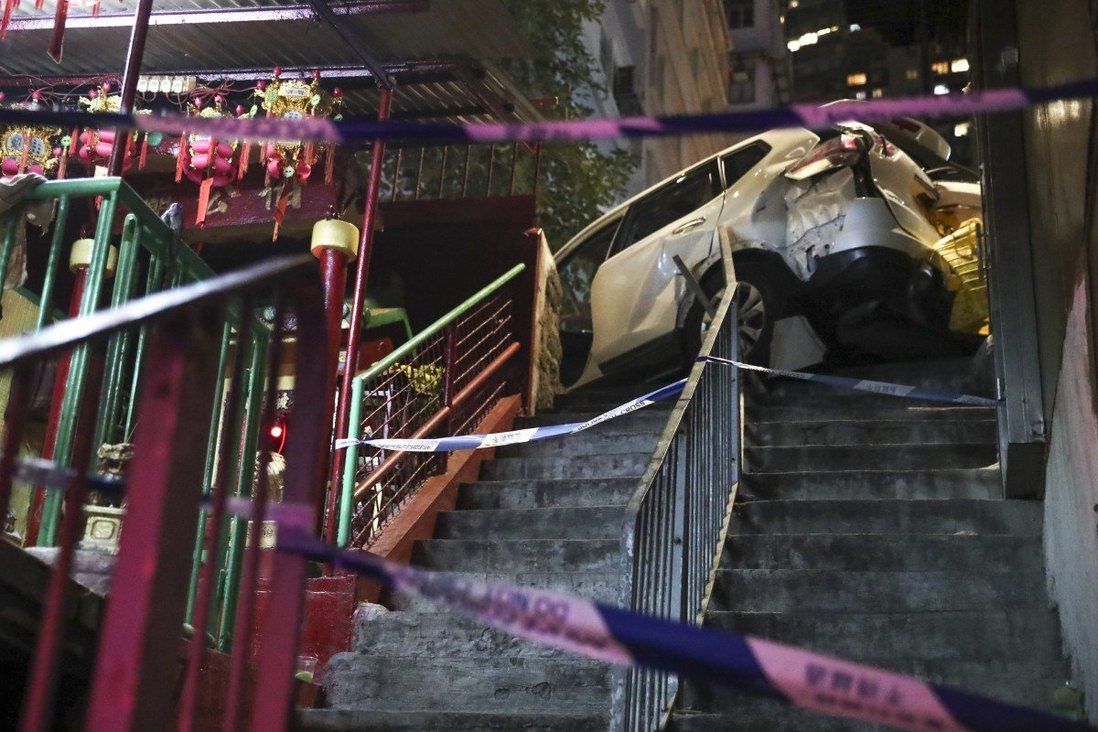 Car crashed at the top of a set of stairs above a pedestrian-only section of Peel Street on Friday night.

A 27-year-old woman who was among eight people injured after a car crash in one of Hong Kong’s busiest nightlife spots died on Saturday evening.

The French woman, who had been in critical condition in Queen Mary Hospital after the Friday night crash, was certified dead at 6.35pm, a government spokesman said. Another woman and a man were listed as in critical and stable condition, respectively, as of 7pm.

A woman, 44, arrested over the crash in the trendy bar and restaurant district of SoHo was a domestic helper who was chauffeuring her employer for a night out, a police source said.

The domestic worker drove her employer to SoHo at around 8pm, parked the car near the top of Peel Street, and they both got out, according to the insider.

As they walked away, the car started to roll down the street and the driver ran after the vehicle but was unable to stop it. It slid down Peel Street, crossed Staunton Street and slammed into a lamp post and injured eight pedestrians, aged 24 to 53. 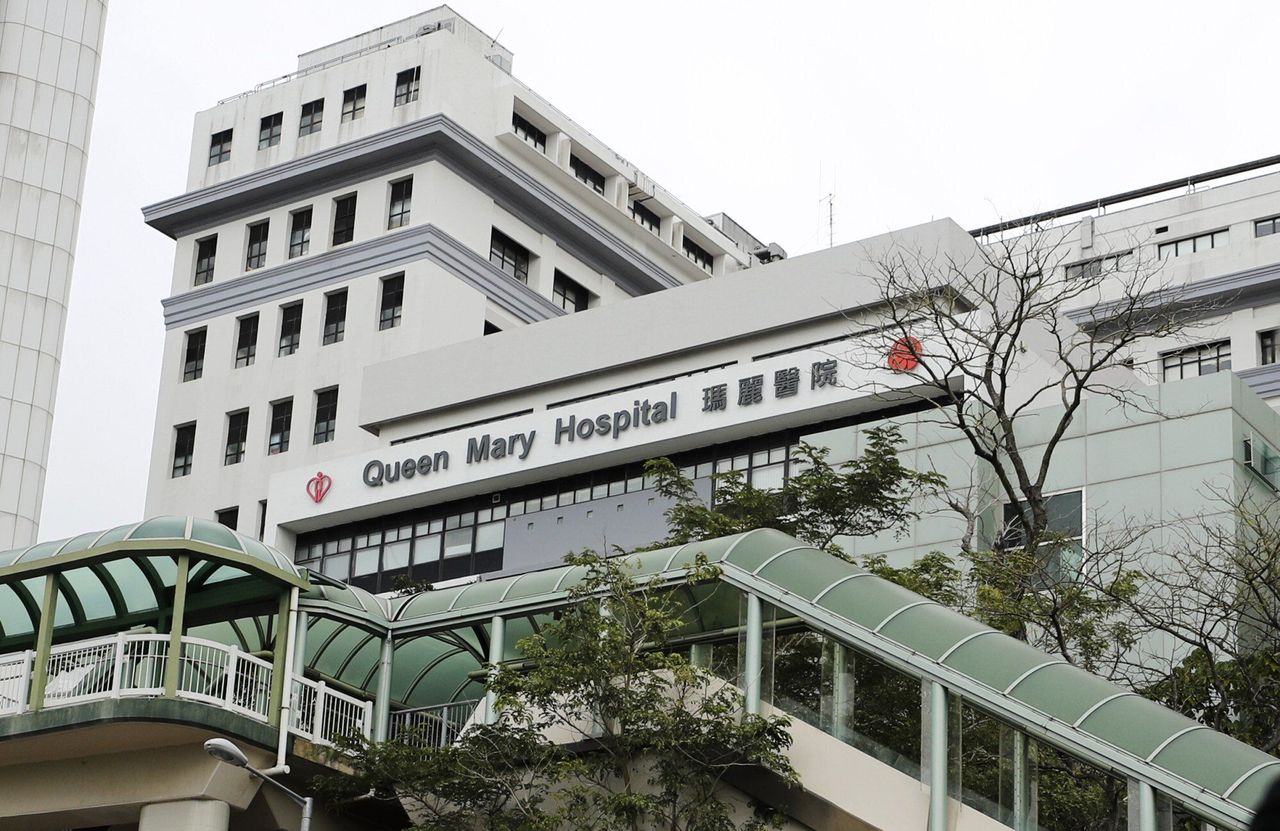 Four of the injured were taken to Queen Mary Hospital in Pok Fu Lam.

One woman was trapped underneath the vehicle and at least a dozen bystanders rushed forward to lift the car to free her, a video clip posted on Twitter showed.

The car crashed at the top of a set of stairs above a pedestrian-only section of Peel Street lined with popular bars and restaurants, often packed with weekend revellers.

The arrested woman was charged with dangerous driving causing death and will appear at Eastern Court on Monday.

A woman who was sitting in an outdoor area of a bar on Peel Street at the time of the incident told a television station that when the vehicle rolled down the street, people began yelling and spilled their drinks everywhere. 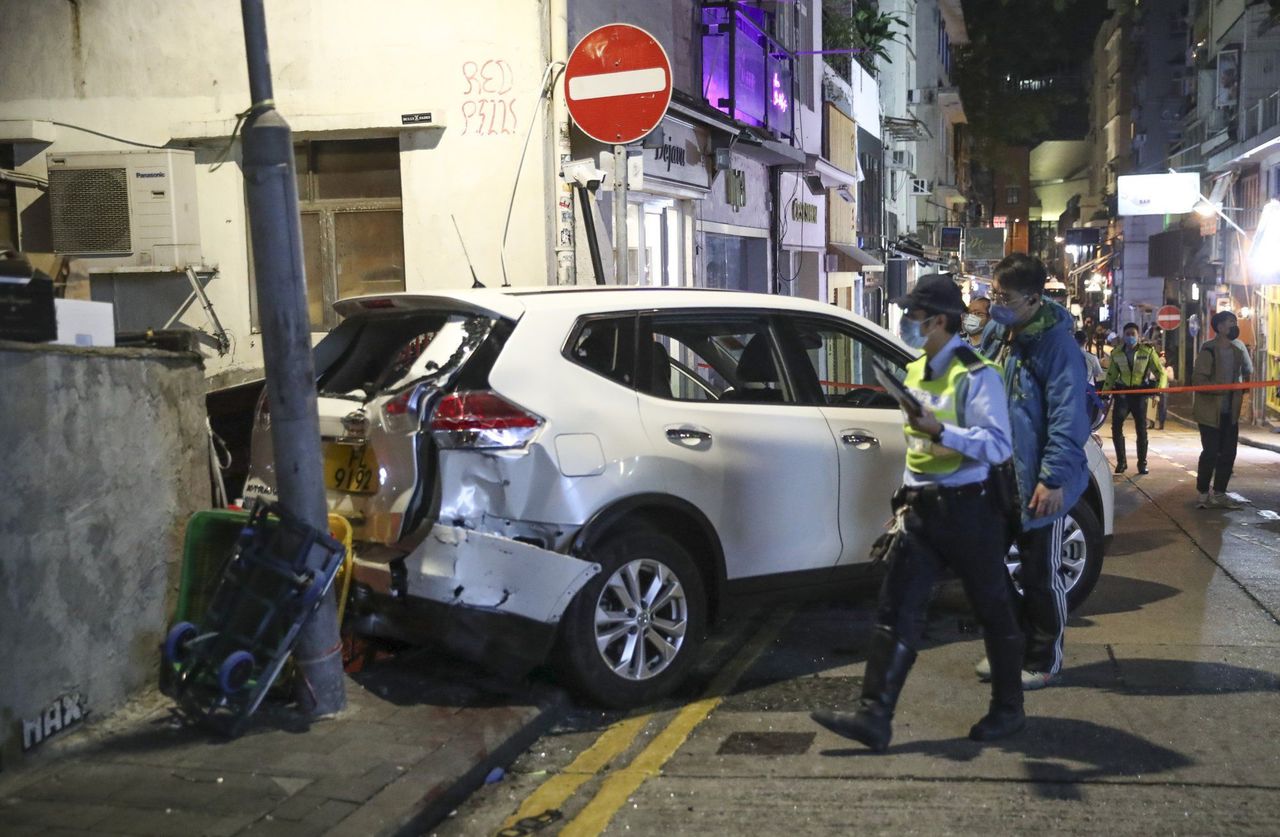 Eight people were injured, two of them critically, when a car jumped a curb in the Hong Kong nightlife district of SoHo in Central on a busy Friday night.

“We were left stunned,” she added.

Most domestic helpers were not legally entitled to drive in Hong Kong, a criminal lawyer said.

“Unless the contract of employment specified that the helper was permitted to drive, then both the employee and employer would have committed a criminal immigration offence of aiding and abetting a breach of condition of stay, which is imprisonable,” he said.

Under the Immigration Ordinance, any person who contravenes a condition of stay is liable upon conviction to two years’ jail and a fine of HK$50,000 (US$6,410).

The lawyer said the case might be used as an example to suggest SoHo should be a pedestrian-only zone in the evenings, as it was crowded with people and had narrow and steep streets.

An employment lawyer said that if the helper was working at the time of the incident then the boss could face civil liability. “The employer can be sued by the injured person, because the employer is liable for acts of the employee whilst the employee is acting in the course of employment,” the lawyer said.