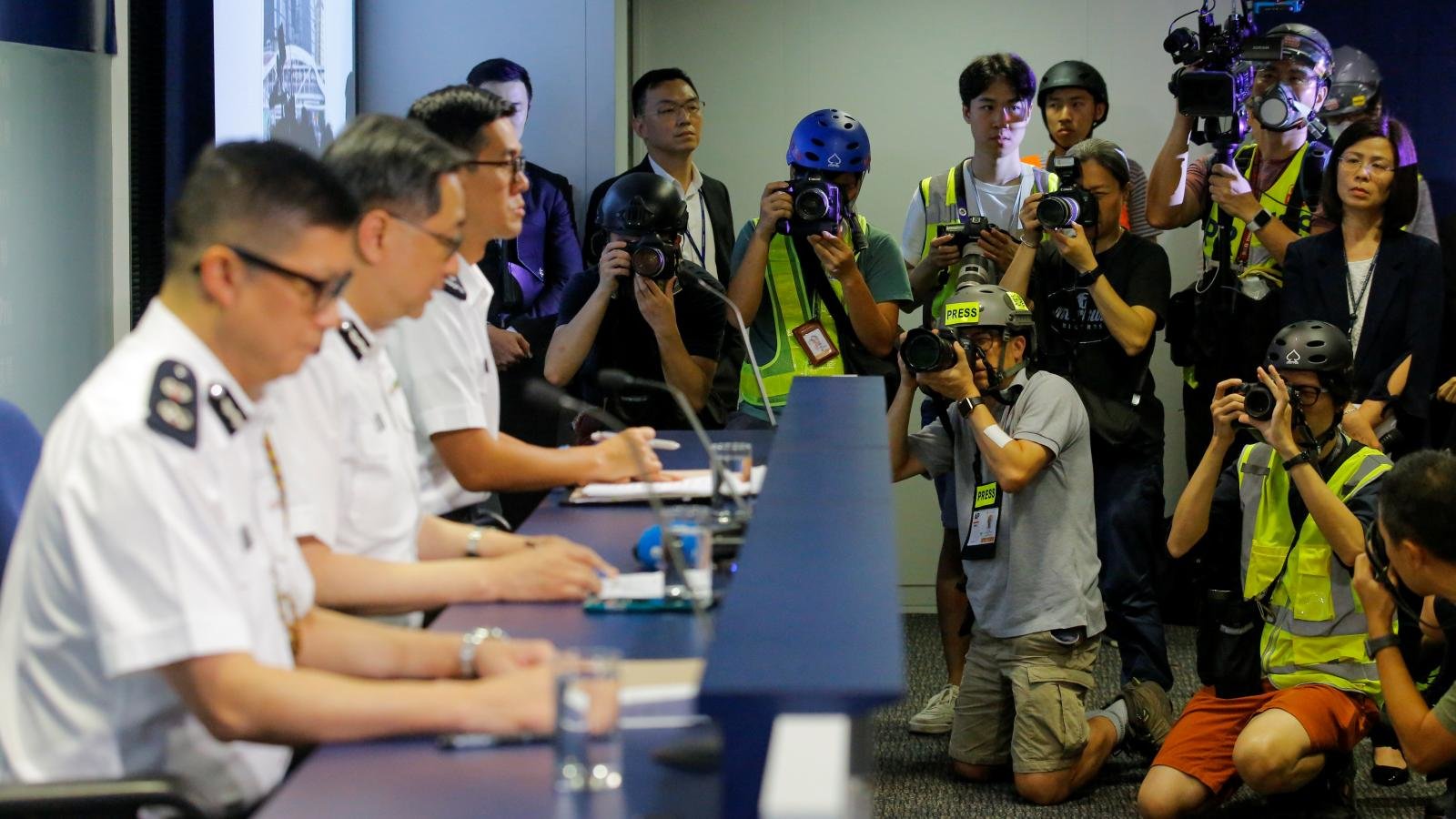 With protests muzzled, Hong Kong takes aim at the press

Choy Yuk-ling, better known as Bao Choy, is among this city's most dogged journalists. Her work for public broadcaster Radio Television Hong Kong has tackled police misconduct, election-rigging, and flaws in personal protective equipment during the coronavirus pandemic.

Last week, nearly a dozen officers arrested Choy at her home for a routine journalistic practice: accessing a public database of car registrations. She was investigating the failure of police to keep a mob from attacking anti-government protesters and others at a subway station last year. Two other journalists were charged that same week, one for resisting the police while filming and another for obstructing officers.

The moves sent a chill through the city’s once-freewheeling media, already shaken by a new Chinese security law that ended free-speech protections long available in Hong Kong but not elsewhere in China. Combined with newsroom censorship, managerial shake-ups and visa denials, the arrests underscored officials’ intensifying drive to tighten control over what is said, written and heard in Hong Kong.

In targeting the media — part of a wider effort to make institutions including schools, courts and the legislature loyal to China — officials have zeroed in on the few local outlets that have resisted government influence, including Radio Television Hong Kong (RTHK), the Apple Daily newspaper and NowTV. But space for critical journalism is also shrinking at outlets regarded as more compliant, such as the 117-year-old South China Morning Post (SCMP) and broadcaster TVB, according to those in the industry.

“What state power has been doing is to try and subdue the few organizations that remain independent, daring and professional,” said Francis Lee, a professor of journalism and communications at the Chinese University of Hong Kong. “They really want to close down this environment of open information.”

The coercion and security law have also unnerved international outlets that based regional operations in Hong Kong because of its open business environment and free-speech protections — both of which some foreign media say are now imperiled.

A spokesman for the Hong Kong government said it is “firmly committed to protecting and respecting the freedom of the press, which is a fundamental right” guaranteed by the territory’s constitution. He added that the police respect the media’s “right of reporting” and have a relationship with the media “based on mutual respect.”

Beijing’s attempts to control Hong Kong’s media began with the territory’s 1997 handover from Britain to China, veteran journalists say. But editorial independence largely held until 2014, when protesters occupied city streets for 79 days to demand the right for Hong Kong people to directly elect their leaders. The protests gained wide coverage and fueled the rise of activists such as Joshua Wong.

Journalists say that period induced a shift, as editors and managers felt more pressure to toe the government line. Scholars who study Hong Kong media point out that ownership changes and an influx of Chinese capital into the territory’s media landscape tilted outlets’ financial interests toward the mainland and altered the approach in newsrooms. The most notable case was the SCMP, which Chinese e-commerce giant Alibaba bought in 2015. Hong Kong’s press freedom ranking, measured by Reporters Without Borders, slipped from 18th in 2002 to 80th this year out of 180 countries.

Elgen Kua, a spokesman for the SCMP, said the paper “remains committed to truth and fairness as outlined in our editorial ethics and standards.”

“Freedom from bias is essential to our work, as is remaining impartial, balanced and objective, and we eschew ascribing our coverage to any predetermined narratives,” he added.

When protests against the Communist Party’s tightening control erupted again in June 2019, the unrest attracted intense coverage, with packs of journalists donning yellow vests as they tailed riot police and moved among demonstrators. Footage recorded by journalists over that period not only led to the acquittals of some defendants who faced charges in connection with the unrest, but exposed police wrongdoing, including violence against demonstrators and falsified evidence.

Beijing responded with the national security law, which, in addition to criminalizing most forms of dissent under penalty of life in prison, allows for “guidance, supervision and regulation” of journalists. Pro-Beijing figures in Hong Kong called for journalists to be regulated, arguing without evidence that “fake reporters” embedded with the press corps on the streets last year.

China’s intentions became clearer. Media tycoon Jimmy Lai was arrested under the security law on Aug. 10, the same day that more than 200 police officers raided the newsroom of Apple Daily, the paper he founded. In September, police said they would recast the definition of a journalist by ceasing to acknowledge professional accreditations and ending recognition of online outlets or student reporters.

The Apple Daily raid spooked journalists at RTHK, who sensed they would be next. “We have, like them, been basically labeled as an anti-government organization,” said one RTHK journalist who, like others interviewed for this report, spoke on the condition of anonymity for fear of retribution.

Pro-Beijing figures are calling for an end to RTHK’s independence, arguing that the broadcaster should act as the government’s public relations arm.

Internal pressure ramped up at the broadcaster early this year, according to several current and former employees, but intensified with the security law, which left journalists fearful that footage or sound bites of protesters advocating Hong Kong independence could land them in prison. In August, RTHK removed from its website an interview with Nathan Law, an exiled activist who is reportedly wanted by the police for violating the security law.

A month later, RTHK extended the three-year civil-service probation period for reporter Nabela Qoser, known for her tough questioning of officials, after reopening a probe into “public complaints” against her.

Choy’s case further unnerved RTHK journalists, who fear the law could be used arbitrarily to intimidate them, as with arrests of protesters.

Amen Ng, a spokeswoman for RTHK, declined to comment on the newsroom environment and said the broadcaster could not comment on Choy’s case as legal proceedings were underway. “Our colleagues will try to help Ms. Choy whenever possible,” Ng added.

Some journalists have reacted with alarm to what they see as compliance from newsroom managers. Broadcaster TVB has run explainers on why the national security law is good for Hong Kong. Radio broadcasters, following the practice of TV networks, will soon start playing China’s national anthem every morning to adhere to another new law that criminalizes mockery of the song — part of Beijing’s efforts to enforce patriotism.

Red lines have also become clearer at the SCMP, the English-language newspaper with ambitions to tell China’s story to its substantial international readership.

Five current and former employees described editors at the paper as deferential to authorities and constantly on edge over what might offend officials or the police. Specific headlines about court rulings against police and leadership changes at China’s liaison office in Hong Kong were quickly toned down, some of these people said. Other headlines and accompanying stories, they said, were framed to focus mainly on acts of vandalism by protesters rather than police actions.

One former newsroom employee described being told by a high-ranking editor that he saw his job as “a corrective to the pro-democracy, anti-China bias of so many of the journalists.” There were times during the protests when stories did need more balance, this person said, but the editor portrayed the issue as endemic and saw his role as “saving China’s honor.”

Kua, the SCMP spokesman, said editorial decisions are “fact-based” and “ideology is not a factor.” The SCMP, he added, “does not shy away from stories that challenge authorities,” citing pieces including one on Beijing’s handling of the coronavirus and an editorial on Choy’s arrest. Kua “categorically” denied that the paper’s coverage of the police was “deferential to any prescribed narrative.”

No one “tells you not to do something,” said one SCMP employee. Rather, the person said, no empowered editor will push for a story that might make the police or China look bad.

“This is how the media has fallen in line with the systematic restructuring of Hong Kong,” said a veteran journalist who has worked for several local outlets.

On Tuesday, Choy appeared in court, charged with giving a false statement about her reasons for accessing the database, which requires users to select from three valid access criteria that do not include journalism.

Surrounded by supporters, the 37-year-old said her actions and her journalism have always been in the public interest.

“I understand this incident is no longer a personal matter but a matter related to the public interest and press freedom in Hong Kong,” she said. “I truly believe that I will never walk alone.”