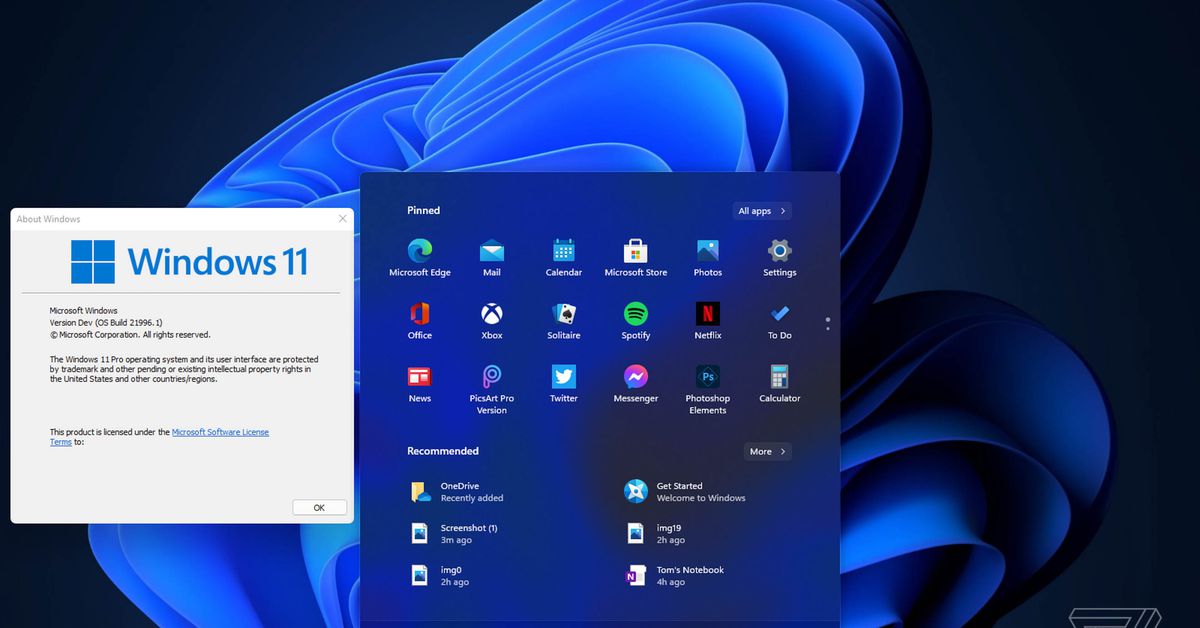 The new Windows 11 user interface and Start menu look very similar to what was originally found in Windows 10X. Microsoft had been simplifying Windows for dual-screen devices, before canceling this project in favor of Windows 11. Visually, the biggest changes you’ll notice can be found along the taskbar. Microsoft has centered the app icons here, cleaned up the tray area, and included a new Start button and menu.

If you don’t want the app icons and Start menu centered, there’s an option to move them all back to the left-hand side. Coupled with the dark mode that’s also available, and Windows 11 starts to look like a more refined version of Windows 10 than something dramatically new. 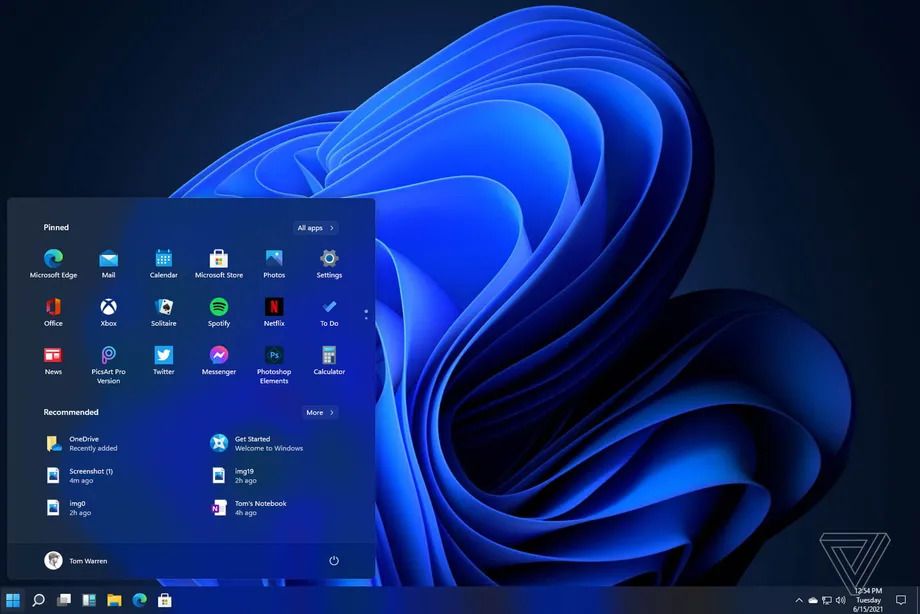 You can move the Windows 11 Start menu to the left side.

Microsoft is also using rounded corners throughout Windows 11. These are visible in context menus, and around apps and the File Explorer. The Start menu itself also includes rounded corners. This is still an early version of Windows 11 that has leaked, so not everything is included yet.

We’re expecting to see more changes to the built-in apps within Windows 11, but most of those don’t appear to be present yet. A large part of the operating system feels finished though, so we’d expect to see a beta of this to arrive shortly for Windows Insiders to test. 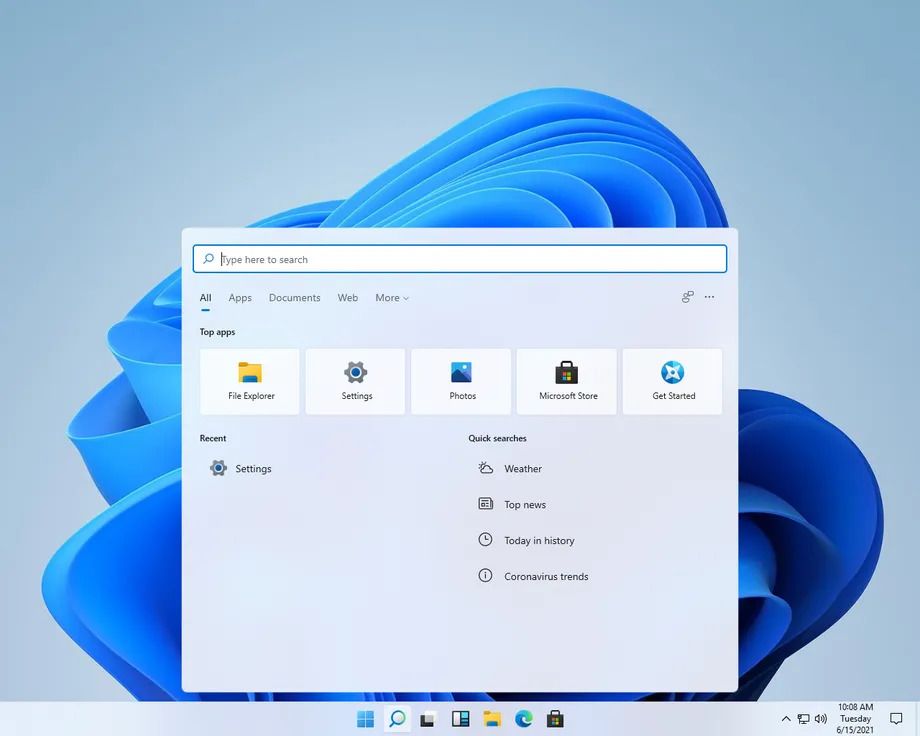 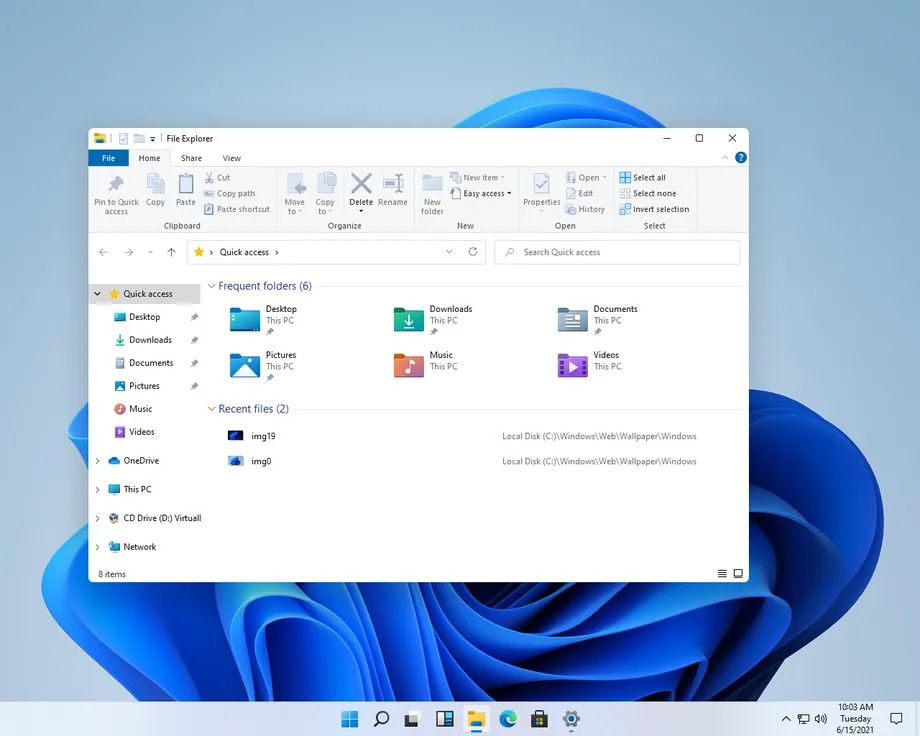 The File Explorer in Windows 11.

You may have noticed a new icon in the Windows 11 taskbar, and it’s labeled Widgets in the operating system. Rumors have suggested Microsoft is bringing back Windows Widgets, and this early version appears to include some.

As this is clearly a very early version of Windows 11, the widgets aren’t loading fully in the OS, but they’re designed to slide out and provide quick access to news, weather, and other web content. 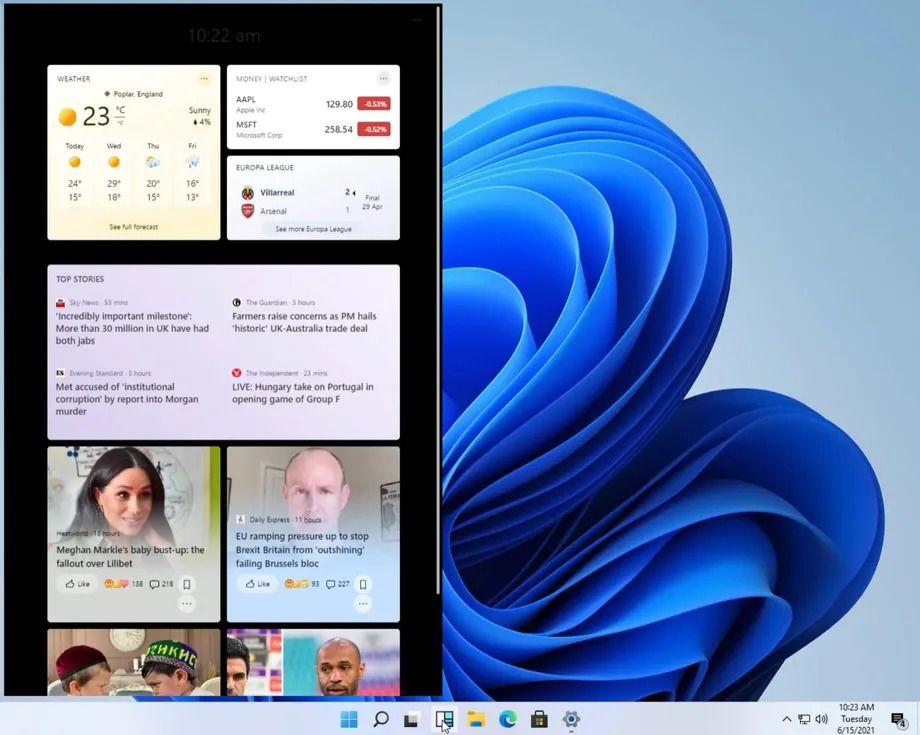 While Microsoft canceled its Windows 10X operating system, the company is clearly reusing large parts of that work with Windows 11. Windows 10X was originally designed for dual-screen devices, before shifting toward traditional laptops and then being canceled. Windows 10X included a number of refined and simplified aspects to Windows, and most of that work is present in this leaked version of Windows 11.

Windows 11 also includes new snap controls that you can access from the maximize button on all apps. They’re modern equivalents of the cascade windows function that has existed in the operating system for years. You can quickly snap windows side by side, or arrange them in sections on your desktop.

Unfortunately, there don’t seem to be big updates to the Windows Store yet. As this is an early leaked version, it’s likely that whatever updates Microsoft is planning just aren’t showing up yet.

The Windows Store interface is largely the same as what exists in Windows 10 right now, with access to all the same apps that are available today. 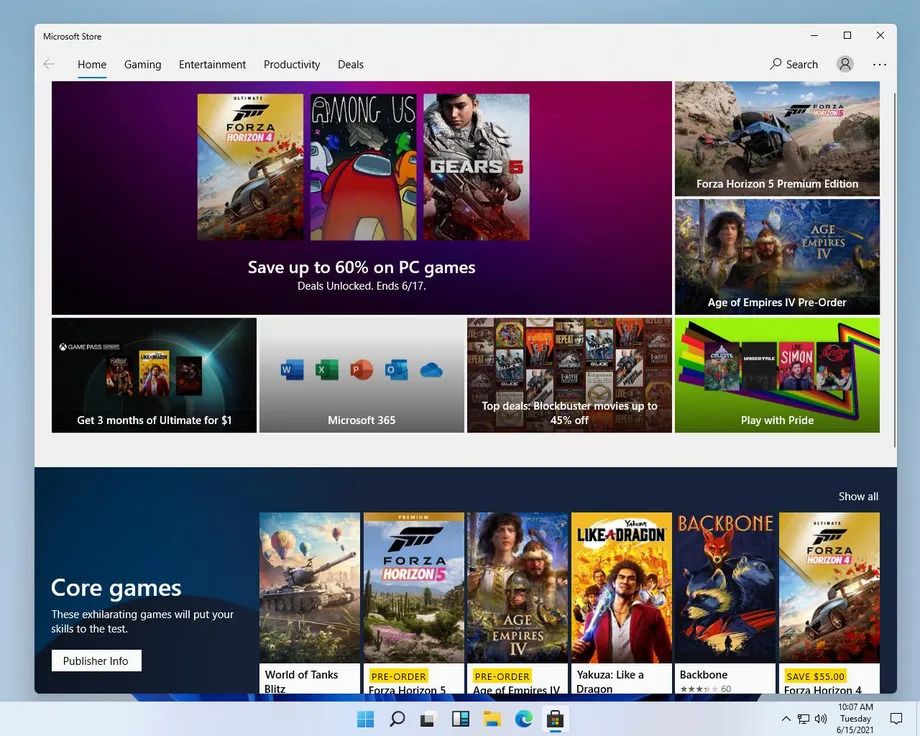 The existing Windows Store in Windows 11.

Microsoft has reportedly been working on a new app store for Windows in recent months, and rumors suggest it will be a big change from what exists today. Microsoft CEO Satya Nadella has promised to “unlock greater economic opportunity for developers and creators” with Windows, and that will likely come in the form of a new store.

Microsoft is reportedly overhauling its Windows app store to allow developers to submit any Windows application, including browsers like Chrome or Firefox. Microsoft may also be considering allowing third-party commerce platforms in apps, allowing developers to avoid the cut Microsoft usually takes from in-app purchase systems.

Elsewhere, Microsoft has also included a new setup experience in Windows 11. It’s very similar to Windows 10X, walking users of new hardware or those upgrading to Windows 11 through a set of steps to configure Windows. This out-of-box experience also includes a new Windows 11 startup sound, which then triggers at every boot.

Microsoft is also improving the Xbox experience in Windows 11. The new Xbox app is now integrated into Windows 11, offering quick access to Xbox Game Pass games, the social parts of Xbox network, and the Xbox store. The Xbox Game Bar and Windows Game Mode all remain the same as Windows 10 in this early leaked build. 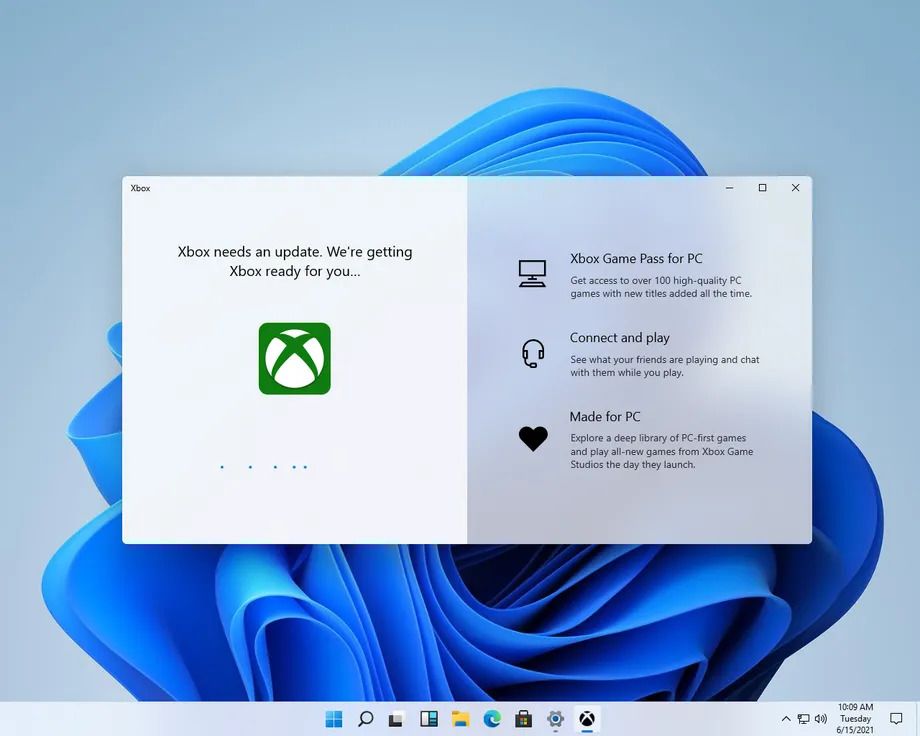 The new Xbox experience on Windows 11. 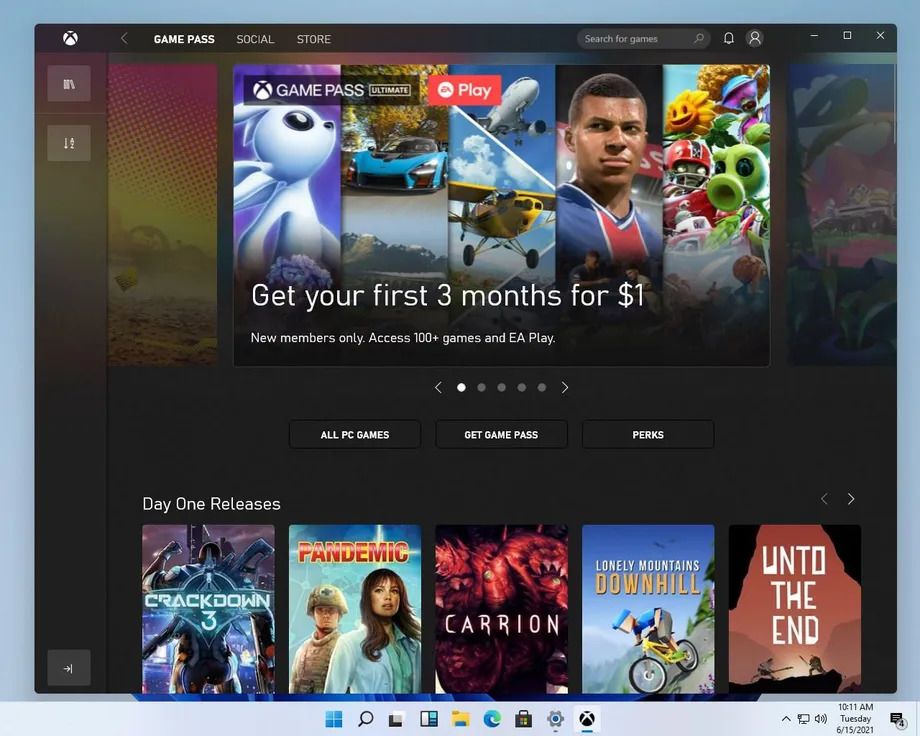 The new Xbox app on Windows 11.

Microsoft has been dropping hints that it’s ready to launch Windows 11. The software giant is holding a special Windows event to reveal its next OS on June 24th. The event starts at 11AM ET, and the event invite includes a window that creates a shadow with an outline that looks like the number 11. Microsoft execs have also been teasing a “next generation of Windows” announcement for months, and this leak now confirms that Windows 11 will be officially revealed later this month.