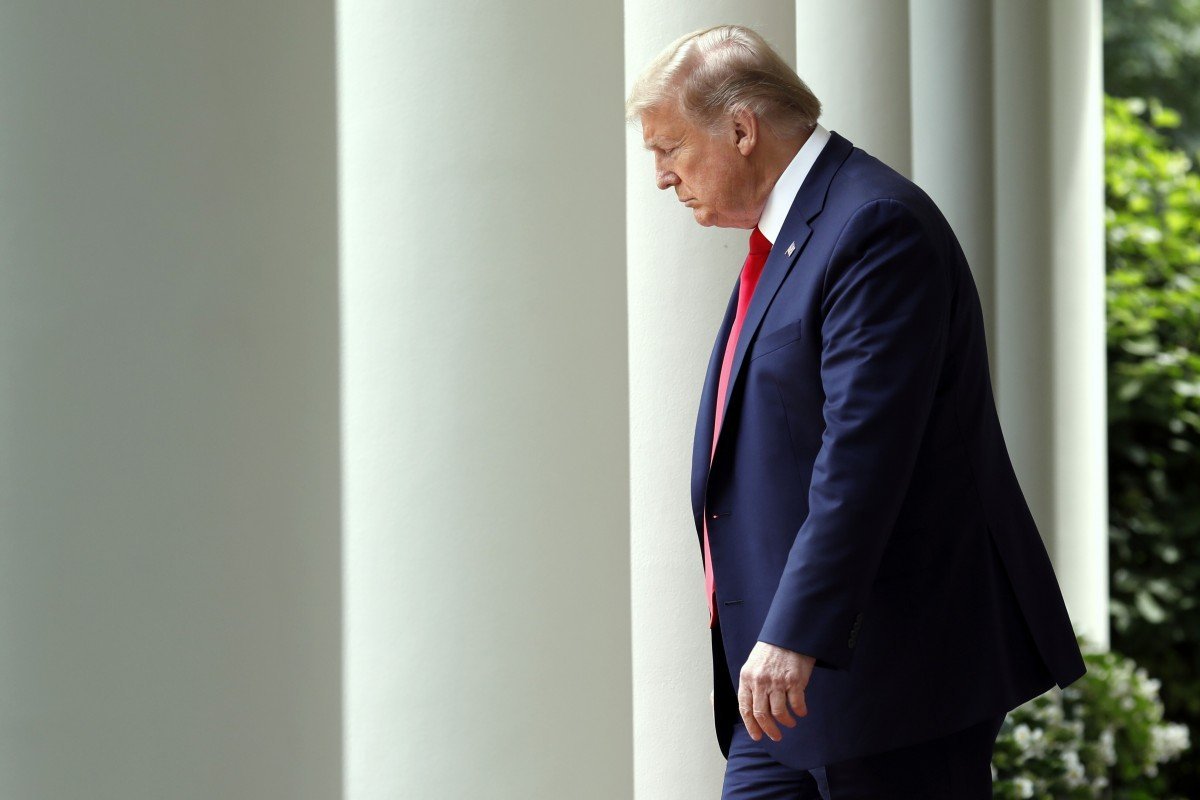 Risks of US financial sanctions emerge for China after National People’s Congress approves national security law for Hong Kong. Beijing wonders whether Washington will cut it off from US dollar payment system and hasten the demise of dollar hegemony in the process

A new and troubling question is suddenly looming for Beijing: will the Trump administration abuse the power of the US dollar to hurt China following Beijing’s plan to impose a new national security law in Hong Kong?

While the probability remains very low that China will be treated like Russia or Iran, and US President Donald Trump has not mentioned sanctions against Hong Kong or Chinese financial institutions, the risk of a financial war – including being cut off from the US dollar system – is no longer “unthinkable” for China.

If Washington were to sever China’s corporate and financial system from the US dollar payments system, which is underpinned by infrastructure such as the Swift international payments messaging system and the Clearing House Interbank Payments System (Chips), it could start a financial tsunami that would lead global finance into unchartered territory, officials and analysts said.

“It’s clearly a nuclear option for the US,” said a Chinese official who has been briefed on internal discussions about Beijing’s response to the possible US reaction to the national security law in Hong Kong. “It would hurt China, but it would probably hurt the US more.”

The official, who declined to be identified, said this scenario was still regarded in the Chinese capital as a “low probability event” and a last resort. “Such an act would be closer to a hot war than a Cold War,” the source said.

The stakes could not be higher as it could severely alter the world’s economic landscape for years to come.

Like virtually every other country in the world, China relies on the US dollar as a payment method for most international trade, financing and investment activities, with financial institutions in Hong Kong often playing a gateway role.

China’s use of the US dollar has helped America to maintain its currency’s “exorbitant privilege” – a phase used by former French finance minister Valéry Giscard d’Estaing in 1965 – in the international monetary system.

Beijing’s view of the US dollar is complicated. On the one hand, China’s government sits on the world’s largest stockpile of foreign reserves, over half of which is in dollar-denominated assets. Beijing also regards the US dollar as a kind of strategic asset, limiting the ability of Chinese citizens to exchange the yuan for the dollar to US$50,000 per year and keeping a wary eye on companies transferring dollars out of the country.

On the other hand, Beijing has been trying hard over the last decade to undermine the US dollar’s power. China’s former central bank governor proposed in 2009 that a new super sovereign currency should be created to replace the dollar.

China has encouraged the use of yuan in trade settlements, it has set up a market in Shanghai to trade yuan-denominated crude oil futures contracts, and it has developed a cross-border yuan payment system, signed dozens of bilateral yuan currency swap deals and even created its own multilateral bank.

These efforts, however, have achieved only limited success as the US dollar remains the first choice for traders, investors and central bankers around the world.

The yuan’s international use is limited compared to the dollar – the latest figure from the Swift system showed that the yuan accounts for just 1.66 per cent of international payment transactions versus the 43 per cent of the US dollar.

In addition, more than 70 per cent of the yuan’s use in international payments takes place in Hong Kong, which has a separate currency and financial system from the mainland.

Because the Hong Kong dollar is pegged to the US dollar and is freely convertible to other currencies, it serves as a means for China to access global capital.

Concerns are growing that the US may move to weaken or even break these links, depriving China of access to global funding while undermining Hong Kong’s status as an international financial centre and readily hurting the US dollar in the process.
The US has imposed financial sanctions upon a number of Chinese companies and banks before. Zhuhai Zhenhua, a state-owned oil company, was punished for breaking US sanctions against Iran, while Bank of Kunlun has also been cut off from the US payment system. But these sanctions are often targeted without broader implications.

China holds US$1.1 trillion worth of US Treasuries securities, or about 4.4 per cent of total national debt, according to the latest US Treasury data.

If the US cuts China from the global dollar payments system, Beijing would speed up its internationalisation of the yuan and accelerate its push to create a global currency system that does not rely on the American currency.

“The US can bully Iran and Venezuela that do not have political and financial power. But the size of China and its currency are too big, so the US does not dare to take such extreme measures,” Lui said.

China’s unhappiness about the US dollar is not new. China’s former premier Wen Jiabao said in March 2009 that he was “a bit worried” about the safety of the nation’s large US Treasuries holdings after the US Federal Reserve started its unconventional quantitative easing programme – pumping money directly into the financial system by buying up US Treasury and mortgage-backed securities – to combat the global financial crisis.

The central bank’s decision this year to resume quantitative easing in a bid to help the US economy survive the coronavirus outbreak has again raised eyebrows in China.

Huang Qifan, the former mayor of the large Chinese municipality of Chongqing, said in May that the US “should not incessantly issue debt nor have limitless quantitative easing” because of the risk it posed to the value of dollar.

US national debt has surged above US$25 trillion from US$22 trillion at the end of December.

The US Federal Reserve has jumped to buy Treasury bonds, mortgage-backed securities and even corporate credit, to support the domestic economy. It has also opened new types of lending to foreign central banks to help ease a shortage of US dollars in international financial markets, including Hong Kong.

But Huang said these measures were designed for “short-sighted American politics and the election cycle” and will reach a tipping point that undermines the dollar when the federal government debt amounts to 150 per cent of its gross domestic product.

“If it goes to 150 per cent, it will definitely mean an economic implosion … the US dollar would lose its credit standing and status,” Huang said.

Chinese researchers are calling for an acceleration of efforts to cut the nation’s reliance on the US dollar.

Li Yang, a fellow at the Chinese Academy of Social Sciences who had advised the central bank, said in an online forum in May that China must accelerate the internationalisation of the yuan and use its economic power to promote the currency abroad in the face of headwinds in the financial sector.

While the dollar remains the anchor currency in the global monetary system, its dominance is gradually weakening.

Cao Yuanzheng, a researcher at Bank of China International, said any US efforts to isolate China from the dollar payment system could accelerate the formation of a new international monetary order to replace the one that came into existence after World War II.

“We’ll see what new monetary system will emerge in the next 20 to 30 years,” Cao said.