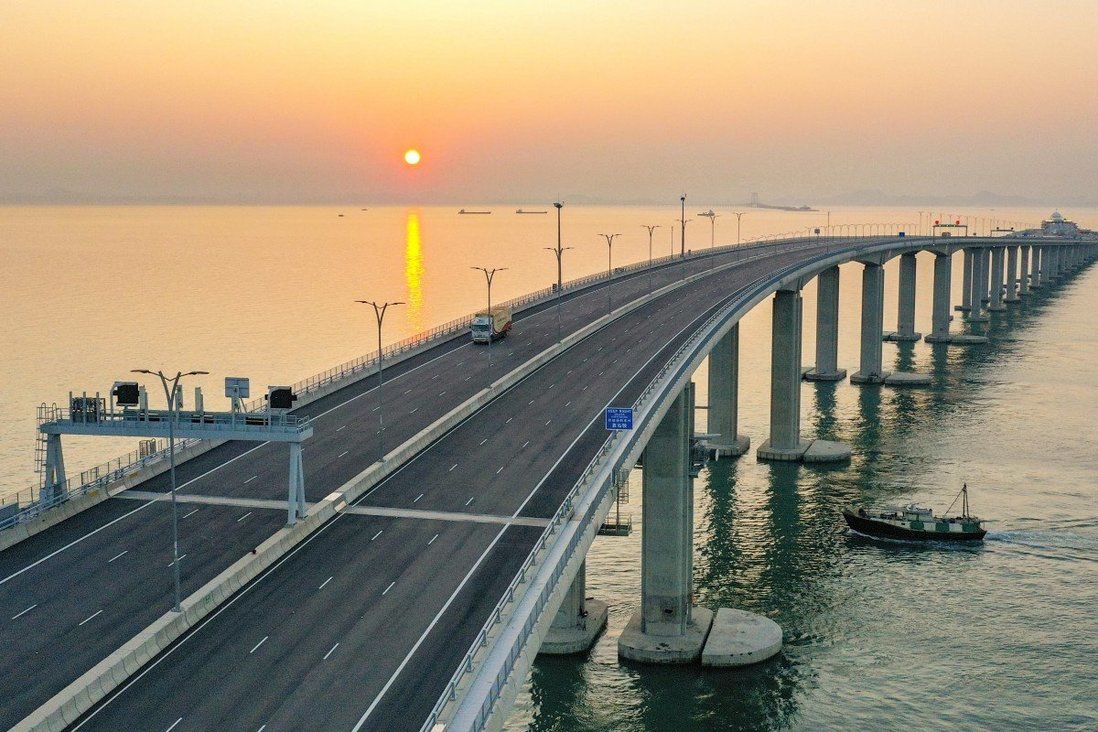 Will a Shenzhen link to the mega bridge benefit Hong Kong?

A recently unveiled plan by Guangdong authorities to link neighbouring Shenzhen to the mega bridge connecting Hong Kong with Macau and Zhuhai will spur growth in the Greater Bay Area and in the local logistics sector rather than spark rivalry, industry players and analysts have said.

The mostly positive outlook on Monday was centred on a proposal involving the existing Hong Kong-Zhuhai-Macau Bridge, released last week by the Guangdong provincial government as part of its blueprint for a comprehensive transport system under the country’s 14th five-year plan.

The scheme is aimed at boosting connectivity with Hong Kong and Macau, with authorities looking into a new link to connect Shenzhen and make “better use” of the mega bridge.

The move may signal a revival of an abandoned double-Y-shaped design for the structure, with one extension linking Shenzhen.

Shenzhen lobbied hard in the early 2000s to be included in the mega project. But the idea was vetoed by mainland Chinese authorities because Hong Kong at the time did not favour the idea, and the present single-forked design was chosen in 2004, leaving the city out of the development. 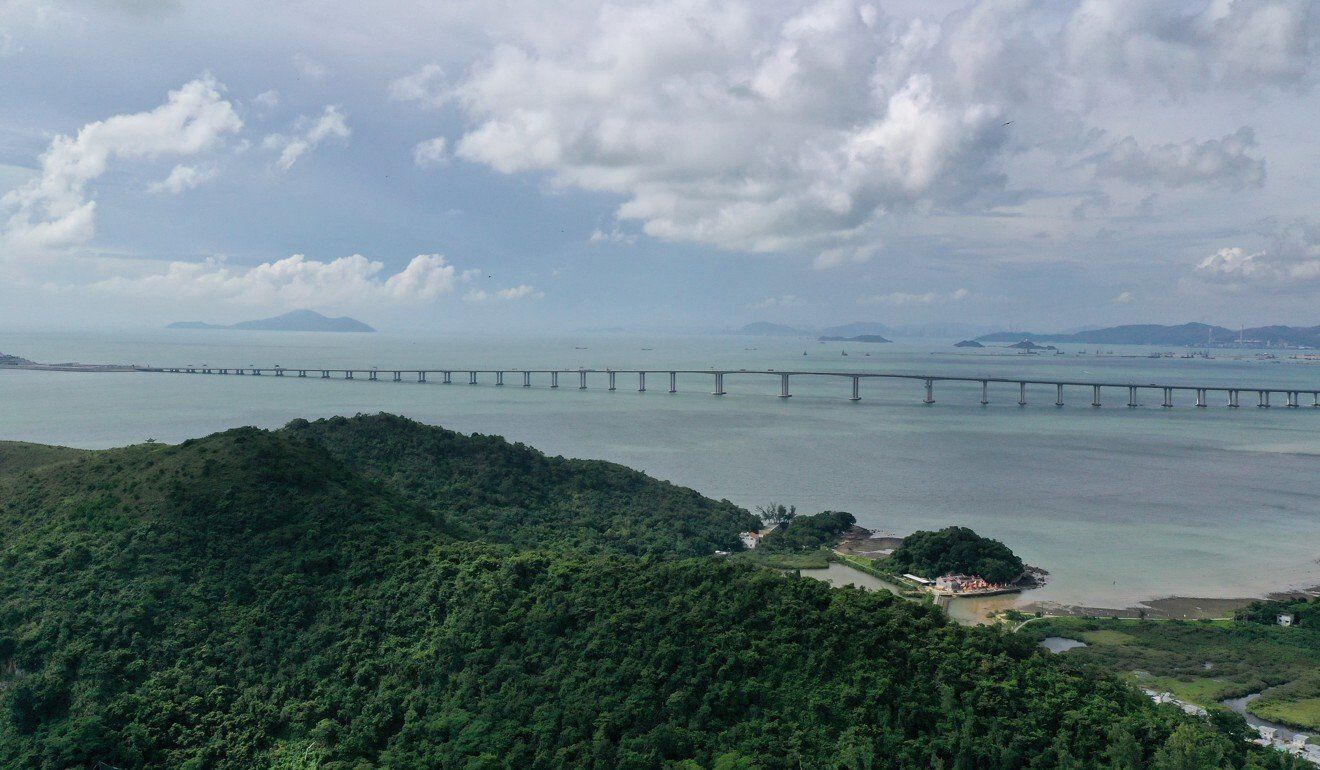 The Hong Kong-Zhuhai-Macau Bridge is the world’s longest sea-crossing.

The 55km Hong Kong-Zhuhai-Macau Bridge, the world’s largest sea-crossing, was opened in late October 2018 after two years of delays and billions of dollars in budget overruns, with Hong Kong’s bill for the project snowballing to HK$120 billion (US$15.4 billion).

Even before the coronavirus pandemic, daily traffic volume was well below the Hong Kong government’s projected mark of 14,000 vehicles.

Another link is also being built to connect Shenzhen and Zhongshan to the north. Known as the Shenzhen-Zhongshan Bridge, it will cut travel time between the two cities to under 30 minutes from the current hour and 40 minutes. That bridge is expected to be completed in 2024.

“Since the bridge’s opening, its vehicular traffic is far below what it was designed for, which is a waste of resources,” Guo said. “We will need to increase traffic flow. Shenzhen, with its sizeable economy and population, has a real demand for convenient transport to Zhuhai.”

“The extension of the bridge to Shenzhen will connect three of the four major cities in the Greater Bay Area, namely Shenzhen, Hong Kong and Macau, and it will be a significant push for the connectivity of the bay area,” he added.

According to Guo, following the recent upgrade of the Hengqin area and the eightfold expansion planned for Qianhai, the proposed Shenzhen bridge extension would link these two strategically important initiatives to boost contribution to the development of the bay area.

Johnny Yu Ka-hung, president of the Hong Kong Guangdong Transportation Association, echoed the sentiment, saying the proposed extension would maximise usage of the bridge and greatly drive traffic flow between Shenzhen and Zhuhai.

Yu said the new link would facilitate the development of Hong Kong’s logistics industry, with easier access for trucks currently travelling from Shenzhen into Tuen Mun, where the vehicles would be parked before proceeding to the container terminal.

“The bridge extension could ease congestion at Shenzhen Bay and provide an alternative route for vehicles to travel to Hong Kong. This will greatly help the city’s logistics development,” he said, adding that Shenzhen would have to build an immigration checkpoint at its end of the extension to facilitate hassle-free journeys to Hong Kong.

Edwin Chung Kwok-fai, president of the Hong Kong Institution of Engineers, however questioned the necessity of the extension in the local context, pointing out that at present Hong Kong already had several cross-border facilities linking it to Shenzhen, including the Heung Yuen Wai Boundary Control Point and the high-speed rail link.

“It is without doubt that the move will make travelling between Shenzhen and Zhuhai very convenient. This will definitely benefit the development of Shenzhen and the Greater Bay Area,” he said. “The impact for Hong Kong is small as the plan mainly focuses on enhancing Shenzhen’s development. But it won’t create rivalry with Hong Kong as those who want to come to Hong Kong for business or visits won’t be affected by the new bridge.”

Timothy Hau Doe-kwong, honorary associate professor at the University of Hong Kong’s faculty of business and economics, said whether the bridge’s Shenzhen extension could spark massive economic benefits depended on its toll fees and the number of car permits allowed.

“The plan has the potential of creating benefits as it will complement the expansion of Qianhai and the rapid development of the Greater Bay Area. The matter is how much the bridge will charge and how many cars from Shenzhen will be allowed to use it,” he said.