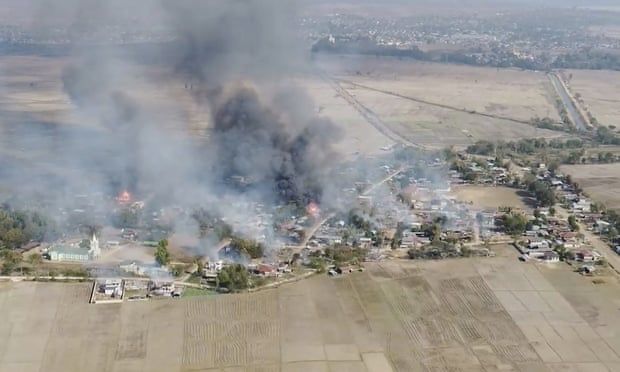 UN rights office warns military has shown ‘flagrant disregard for human life’ and has deliberately targeted civilians since it seized power on 1 February 2021
Myanmar’s military junta has committed widespread and systematic abuses against civilians that may amount to war crimes and crimes against humanity, according to the first comprehensive report to be produced by the UN’s human rights office since last year’s coup.

The UN rights office warns the military has shown “flagrant disregard for human life” and has deliberately targeted civilians since it seized power on 1 February 2021.

The report details numerous atrocities by the military, including the bombardment of populated areas with airstrikes and heavy weapons, and a series of mass killings of civilians. It cites cases where civilians have been shot in the head, burned to death, arbitrarily arrested, tortured or used as human shields.

“The appalling breadth and scale of violations of international law suffered by the people of Myanmar demand a firm, unified, and resolute international response,” said Michelle Bachelet, the United Nations high commissioner for Human Rights.

Many western countries have imposed sanctions on members of the military and military-owned businesses, while the Association of South-east Asian Nations has led attempts at negotiations, though with virtually no progress.

At least 1,600 people have been killed by security forces in Myanmar since the coup, according to the UN, which says airstrikes, helicopter gunships, artillery, and mortars are being used indiscriminately in populated areas. The report also refers to series of massacres by the security forces, including the killing of up to 40 women, men, and children in Kayah State in December. Those who discovered the victims’ remains said some bodies were in positions that suggested they had tried to escape and had been burned alive, according to the UN.

The military junta, which is widely opposed by the people, has imposed brutal violence and repression in an attempt to maintain control of the country. Despite this, the public remains defiant in its refusal to accept military rule. Alongside a peaceful protest movement, many civilians – from poets and farmers, to IT workers and students – have taken up arms in response to military atrocities.

Raids on the homes of anyone suspected of dissent “occur with unrelenting regularity”, according to the report. At least 12,500 have been detained over the past year, with “hundreds if not thousands having been subjected to torture”.

About 325 people, including 16 children, have been killed in detention.

The report is based on interviews with more than 155 victims, witnesses, and advocates, as well as satellite imagery and video footage. The junta has previously accused the UN of bias and seeking to interfere in its domestic affairs, and has rejected past death toll estimates cited by officials. It has also accused the UN of downplaying violence by anti-coup groups.

The UN report said at least 543 people have been killed due to their perceived support for the military, but that the majority of human rights abuses it had documented were carried out by security forces.

Bachelet said the public was defiant in its demand for an end to military rule. “Throughout the tumult and violence of the past year … they remain committed to seeing a return to democracy and to institutions that reflect their will and aspirations,” she said.

“Meaningful action by the international community is urgently needed to stop yet more individuals from being stripped of their rights, their lives and their livelihoods,” said Bachelet.
Add Comment