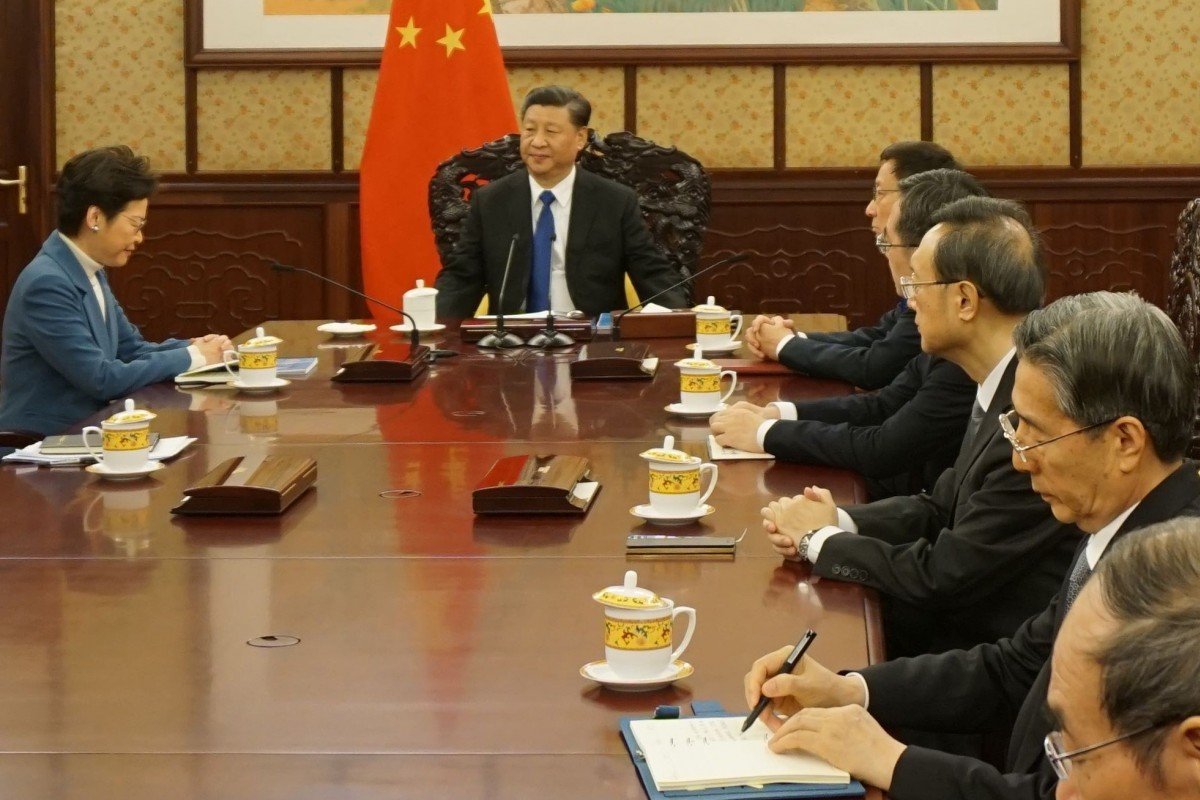 It was not clear if Guo talked to Lam but his presence spoke volumes about Beijing’s concerns, observers say
China’s domestic security chief was a surprise attendee at Hong Kong leader Carrie Lam Cheng Yuet-ngor’s meeting with President Xi Jinping on Monday, underscoring Beijing’s growing unease about national security in the city.

Monday’s meeting was part of the city leader’s annual duty trip to brief the president, an event at which the president is usually joined by a group of top Beijing officials overseeing Hong Kong and Macau.

But Guo Shengkun, the head of the party’s Central Political and Legal Affairs Commission, was also present.

Like Yang and Ding, Guo is one of the 25 members of the decision-making Politburo, but he also oversees China’s police force, spy agency, prosecutors and judiciary.

His attendance comes three months after Guo’s subordinate, Minister of Public Security Zhao Kezhi, made a similarly unexpected appearance at a meeting between Xi and Macau’s new leader, Ho Iat-seng.

One source familiar with the duty visit’s arrangements said Guo had led an inter-agency rapid-response team set up in Shenzhen to monitor Hong Kong’s anti-government protests, now in their sixth month.

Observers said that Guo’s attendance – his first at such a meeting – spoke volumes about the attention Beijing was paying to Hong Kong’s police and law enforcement.

Li Xiaobing, a law professor at Nankai University in Tianjin, said Guo’s presence was probably related to coordination between security agencies in Beijing and Hong Kong.

“Efforts to end the city’s violence are still under way and [Carrie Lam’s] briefing would naturally touch on the Hong Kong government and police work in this area … as well as how to coordinate with the central government,” Li said. “Thus Guo’s attendance probably has this consideration.”

“The Central Political and Legal Affairs Commission also oversees the national security apparatus,” Gu said. “They might look into things related to foreign entities, like US groups of NGOs travelling to the city.”

During the Monday meeting, Xi also stressed that China would resolutely oppose foreign forces that sought to interfere in the city’s affairs.

It was unclear from the official accounts of the meeting whether Guo and Lam had any exchanges.

Guo was also present at a senior-level symposium to commemorate the 20th anniversary of the handover of Macau earlier this month. Xi is visiting Macau this weekend to mark the anniversary.