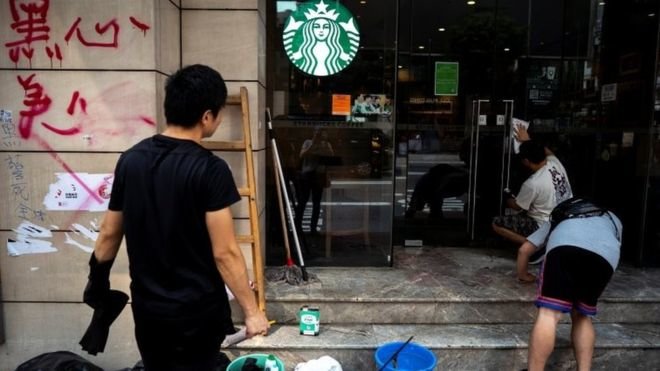 Why Starbucks? The brands attacked in Hong Kong

For Hong Kong businesses, voicing support for China or the police can make them a target.

Broken glass, raging fires, and smashed up barricades: the pictures from Hong Kong in the past few days look like random chaos.

But in the middle of the violence, most activists are being deliberate about the places they attack.

So why are protesters targeting Starbucks? And the metro? And certain shops, restaurants and banks?

There are obvious targets...

Hong Kong is complex, but can largely be divided into those who support the protesters and their anti-Beijing stance, and those supportive of the mainland.

So when peaceful protests turned into violence against property, big mainland firms like Bank of China and tech company Xiaomi became targets for vandalism and spray-painting.

But other less-obvious places are also in the firing line.

While Starbucks may be a US brand, the Hong Kong franchise it is operated by a local company, Maxim's Caterers.

She made her comments with billionaire businesswoman Pansy Ho, representing the Hong Kong Federation of Women, at the United Nations Human Rights Council on 11 September.

So protesters started directing their anger against Maxim's and the franchises it operates.

The restaurant group is one of Hong Kong's largest, and includes other brands such as Genki Sushi and Arome bakery, which have also been targeted.

Maxim's Caterers issued a statement saying Ms Wu "does not hold any position at the company" and was not involved in managerial decisions - but so far this has failed to satisfy protesters.

Hong Kong is a Special Administrative Region of China, so has some autonomy and people have more rights

Clashes between police and activists have been becoming increasingly violent

In October, the city banned all face masks to try to shut down the protests

After there was confusion about a Facebook post - which some read as coded criticism of police - the operator of the Hong Kong franchise said he supported the police and government.

Before long, Yoshinoya restaurants had their windows smashed and graffiti all over their walls.

Another targeted brand is Best Mart 360, a chain of small grocery stores. It's an example of the divisions running within the Hong Kong population.

The boss of Best Mart 360 is Hugo Lam Chi-fung, permanent honorary president of the Hong Kong Federation of Fujian Associations which has held several demonstrations in support of China.

Fujian is a Chinese province, from where many people have emigrated to Hong Kong over the years. Hong Kong's Fujianese community has been vocal in supporting the city's police force.

Those demonstrations have led to clashes with activists - who have accused their opponents of being part of the Fujian triad gangs, a form of organised crime.

Best Mart 360 has released several statements, insisting it is not linked to any Fujian triad.

The triad allegation has also been levelled against a mahjong house in a part of town home to the Fujianese community. Mahjong is a Chinese tile game, played socially.

The parlour has released a statement saying they are not Fujianese and in fact support the protesters' demands.

There also have been cases where places have become the target of activists' anger based on mistaken assumptions of China ties.

The Shanghai Commercial Bank is not mainland-owned but - despite its name - based in Hong Kong.

The Yifang bubble tea chain was also wrongly associated with the mainland when in fact it's from Taiwan.

In both those cases, the protesters wrongly targeted outlets only to later issue an apology and in some cases even help in the cleanup.

In order to avoid such mix-ups and to coordinate action, the activists have even come up with a colour-coding system.

The colours black, red and blue are used online to differentiate between thrashing a place, spay-painting it or simply boycotting it.

In the case of shops thought to support the protests, they're marked yellow with a call to actively support them.

So why target public transport?

Stations along Hong Kong's MTR metro system have repeatedly been attacked, vandalised or even set on fire during the unrest.

The MTR is privatised, with the Hong Kong government as the largest shareholders.

In mid-August, the operator was criticised by Chinese state media for helping "rioters" move around and protest across the city.

After that, the MTR began shutting certain stations before people could gather for demonstrations. At one point the entire network was shut down.

Activists also accuse the operator of allegedly helping the police to arrest protesters, and for not releasing CCTV footage of alleged police brutality.