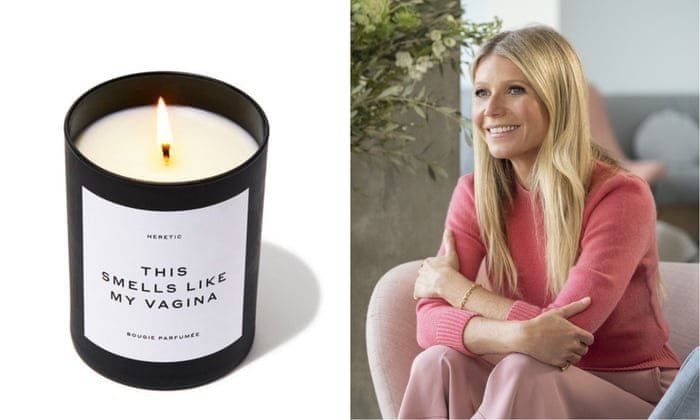 Why is Gwyneth Paltrow selling a candle that smells like her vagina?

Gwyneth has made a candle called This Smells Like My Vagina for her website, Goop. And, of course, it has sold out
Truly, has any vagina ever been as fruitful as Gwyneth Paltrow’s? It has birthed discussions of vaginal steaming, vaginal jade eggs, $15,000 dildos, something called “sex dust” and a photo of Gwyneth standing in a giant vagina to advertise some inevitable Netflix documentary/reality TV series crossover. Because Gwyneth no longer has just her head up her vagina; she has crawled all the way inside. I am torn between suggesting this is a very advanced yoga position accessible only to those who have endless free time to practise, and pointing out this is The Human Centipede, but for extreme narcissists. Let’s go with both.

So Gwyneth has made a candle called This Smells Like My Vagina because, well, of course she has. It is priced at a comparatively bargain £58, which was pretty much what the sex dust cost, which makes me think Gwyneth is underpricing her vagina, really, if she is just selling it for the price of a load of old dust. And I say “was what the sex dust cost” because the sex dust, like the vagina candle, sold out.

Yes, Gwyneth’s vagina has been good to us, but it has primarily been good to her. Well, in the main. As all of us ladies know, sometimes there can be problems in that department, and while most of us sort ours out with a dose of Canesten, Gwyneth’s vagina problem, in classic Gwyneth fashion, ended up costing her $145,000 (£110,000). This was in 2018 when her near-notorious wellness company, Goop, was fined under California’s civil penalties laws for making what was described as “unsubstantiated” marketing claims about the aforementioned jade egg. It turns out, incredibly, that shoving a random object up your vagina won’t “balance hormones, regulate menstrual cycles, prevent uterine prolapse and increase bladder control”.

In fact, the gynaecologist Dr Jen Gunter, in an open letter to Gwyneth that went as viral as an unwashed jade egg, suggested that it might cause toxic shock syndrome. Despite that, it is still for sale on goop.com, for a steal at a mere £60, although after that legal unpleasantness, the only words next to it on the site are: “Eggs are pre-drilled for string add-on, we recommend using unwaxed dental floss.” The mind does truly boggle.

Whole religions have been founded trying to answer the big questions: what is the meaning of life? What is reality? How can we cope with the concept of mortality? Goop is a quasi-religion in itself, from its messianic head figure, its deluded self-belief, its ludicrous claims and its overflowing bank account accrued from the desperate and vulnerable, estimated to exceed $250m. It has answered perhaps the greatest question of all: what does Gwyneth’s vagina smell like? According to the candle, it is a “funny, gorgeous, sexy and beautifully unexpected scent”, a mix of “geranium, citrusy bergamot, and cedar absolutes juxtaposed with damask rose and ambrette seed”. To which one can only say: boy, Gwyneth sure does spend a lot of time up there to have picked up on all that. I’ve read entire wine menus with fewer descriptive references.

But we must tread carefully here because Gwyneth does not like people questioning her vagina. In 2017, pre-legal case, in response to Dr Gunter’s repeated criticisms, Goop posted a gorgeously huffy reply, which Gwyneth tweeted, with the comment: “When they go low, we go high.” Who knew flogging vaginal eggs was taking the high road? Goop’s “contributing doctors” described Dr Gunter as “strangely confident” (to which Dr Gunter replied: “I am appropriately confident”) and insisted they are “empowering women” by “questioning the status quo”. The status quo being, I guess, vaginas without egg-shaped rocks stuck up inside them. Thank God that status has been quo-ed. Those doctors, by the way, seem to have been strangely silent, post-legal case. No doubt so as to empower women better.

Still, Goop is worth more than a quarter of a billion dollars, largely because of Gwyneth talking about her vagina, so no wonder she has a smile on her face (or maybe that’s just the vaginal egg). So, light that candle, breathe deep and accept the facts: this is Gwyneth’s vagina. And the rest of us just live in it.
Add Comment