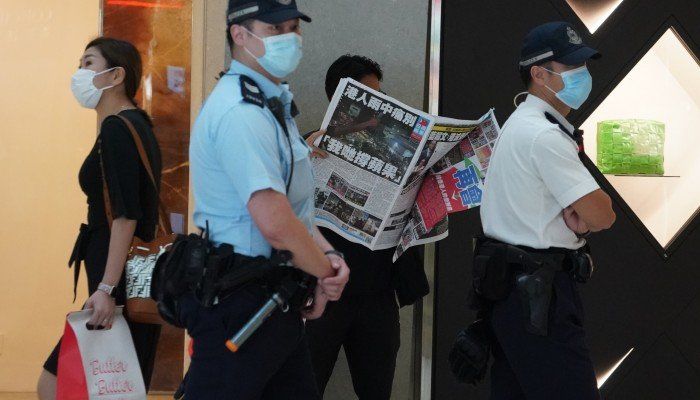 For some, the best thing to do is stay out of politics, avoid areas of uncertainty and toe the government line. Then there are others, raised in a system that espouses freedom, who feel the need to speak out.

I have been asked of late why I remain in Hong Kong despite not liking the ever-greater erosion of my values by Beijing’s rules. Why do I continue writing a column that more often than not is political in nature when others have determined that expressing such opinions are no longer worth the risk?

The scope of the national security law seemingly knows no bounds; even on the first anniversary of its introduction, I am still unsure precisely what constitutes a violation. My Western upbringing and education are clearly at odds with the thinking of the Communist Party, which is calling the shots.

Chief Executive Carrie Lam Cheng Yuet-ngor and other officials repeatedly deny that the freedoms Hong Kong has long enjoyed and been promised have been diminished.

They brush aside criticism from free societies over the forced closure of Apple Daily, a newspaper critical of Beijing and the Communist Party. They deny the arrest of several of its top journalists – on charges of conspiracy to collude with foreign forces and publishing reports calling for overseas sanctions against Hong Kong and mainland China – is conclusive evidence of the erosion of liberties.

The promotion of former deputy police commissioner John Lee Ka-chiu from security secretary to chief secretary – the second-highest government job – and commissioner of police Chris Tang Ping-keung taking his post confirm suspicions in some circles that this special administrative region has become a police state.

Authorities contend that both men are superlative administrators who care deeply for the needs and well-being of citizens.

There is also a reality for Hong Kong, a city built on international business and commerce and cross-border trade and investment. Where money is to be made, freedoms and liberties are not important to certain people.

This was brought home vividly in a conversation I overheard in a restaurant between two young Western equities analysts. On the day Apple Daily’s closure was announced, one was excitedly sharing news of her promotion to a job that paid HK$68,000 (US$8,800) a month and she was already earmarking how it would improve her standard of living in a city famed for its cramped housing and high rents.

But there is another story. Lawmakers seeking Western-style democracy and some academics, teachers, lawyers, journalists and people active on social media have been asking themselves whether it is worth their while to continue doing what now feels like a risky business.

Is speaking out about a government’s perceived poor decision now a crime? Can history or events be looked at objectively, not through a single lens
? Is it an offence to criticise an official for their haughtiness, inability to articulate a position or failure to take a balanced view of a situation?

The city does not have a fake news law yet. If and when it does, I am sure it will be aimed not at what officials say but what others say about them.

Police recently claimed 100,000 complaints were made to them for alleged national security infringements in just six months. That is an average of about 550 a day, which means either the government is constantly teetering on the edge of being overthrown or people are not quite sure what constitutes an offence but will report it anyway.

Perhaps it is an indication of something more sinister that was rampant during China’s Cultural Revolution – people taking revenge against those they don’t like.

For some, there are easy ways to deal with the national security law – stay out of politics, avoid areas of uncertainty and unquestionably toe the government line. But then there are others, myself among them, driven by professionalism or raised and educated in a system that espouses freedom and equality.

We believe that a government’s job should be to fairly use public resources to serve citizens’ needs, that we should be free to point out perceived failings or wrongdoing, discuss ideas and concepts openly so society can be enriched and improved, that laws should be evenly applied to all people and that we should have a say in how we are governed.