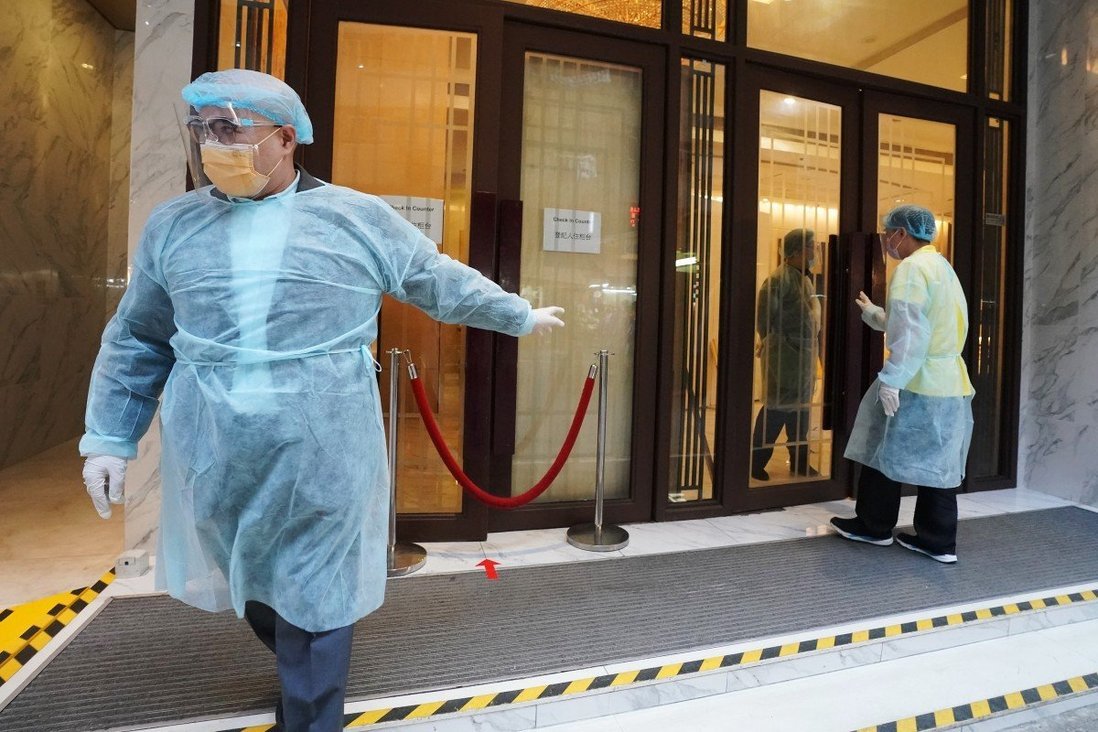 With loopholes in social-distancing policies and a lack of data, is extra-long quarantine really helping to suppress the pandemic in the community?

First-world problems, perhaps, but on the seventh day of my three-week mandatory hotel quarantine in Hong Kong, the toilet flush stopped working.

The concierge of my hotel in Aberdeen, which my husband and I chose for the view and a window that could open, apologised over WhatsApp: the Water Supplies Department had not notified them in advance that flushing services would be temporarily suspended to repair a water main.

In a fit of incredulity, I rang the government’s Covid-19 hotline. I understood that there was an emergency, I explained, but did the Water Supplies Department know the affected area included a building whose residents were banned from leaving their rooms? Could the department complete these repairs quickly?

The person on the other line paused for a second, then asked tentatively: “Which department is your complaint against? How do you spell it?”

I instantly regretted two things – not being able to speak Cantonese and expecting the government to provide me with answers or assurances.

For the next 12 hours, I proceeded to relive my younger days as a roving reporter visiting smaller Indonesian towns, where it is common to find a scoop bucket and a pail of water next to the toilet. 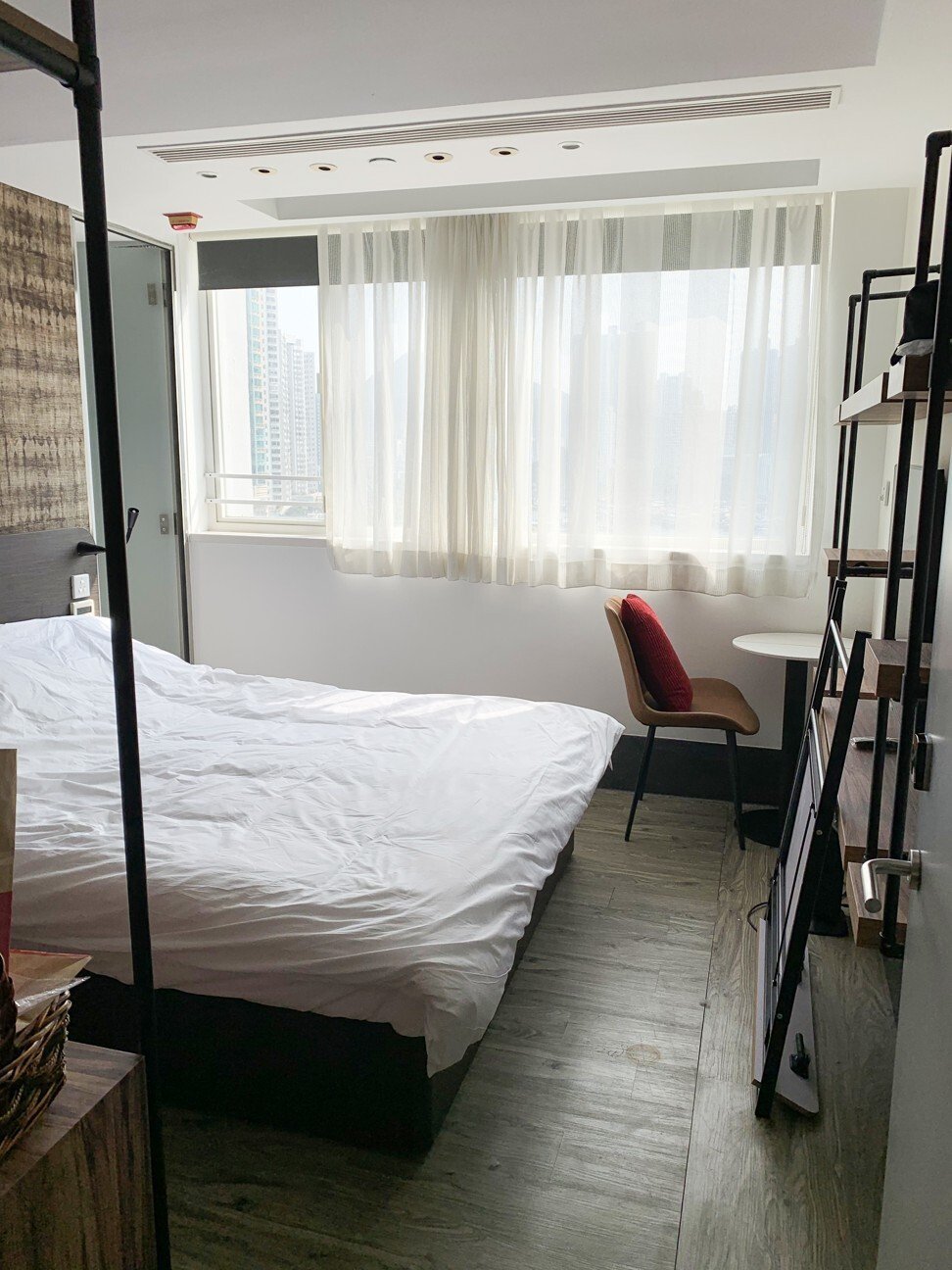 The writer and her husband’s home for three weeks.

Day 7 was a turning point. Prior to that, feelings of (forced) optimism tangled with a sense of dread. Why would a global city require 21 days of hotel quarantine for all incoming travellers, even those from low-risk countries such as Singapore? There had been concerns over the new mutations but most scientists maintained the coronavirus had a 14-day incubation period, and the government itself had acknowledged that cases with longer incubation periods were very rare.

Why were public funds going toward subsidising hotels designated as quarantine facilities without the requisite monitoring of the quality of rooms and food on offer? If health authorities were telling people to avoid poorly ventilated places, what about those stuck in hotel rooms with windows that can’t open for 21 straight days?

Improvisation by pouring water down the toilet thus gave rise to a dispassionate realisation – the only way forward was to bury the questions but arouse the sense of cynical self-sufficiency that gives native Hongkongers their street cred. In the early days of the pandemic last year, people in the financial hub of 7.5 million spontaneously began wearing masks upon leaving their homes. Amid a pronounced scarcity of personal protective equipment in the city, some scrambled to source for surgical masks online.

The mental makeover was made easier by generous friends who dropped off home-cooked meals and other necessities – a lunchbox steamer to reheat food, a basin to wash small items of clothing, some crockery (the hotel provided plates, cups and silverware), extension cords, a clothesline/clothes pegs/hangers, dish soap and sponge, basic kitchen tools (fruit knife, cutting board, scissors), scotch tape, ziplock bags and cleaning supplies. One Saturday, my husband’s colleagues surprised us with a cake.

The HK Quarantine Support Group on Facebook was an invaluable source of information. Tips shared by members meant we packed a yoga mat, extra clothes and washing powder (since no laundry services were allowed), a medical kit, and an HDMI cable to connect a laptop to a TV (though our hotel had a Smart TV). Breakfast came bundled with a drink, the hotel later added lunch and dinner to our room package and we used the delivery app Foodpanda for fruit, milk and cereal. 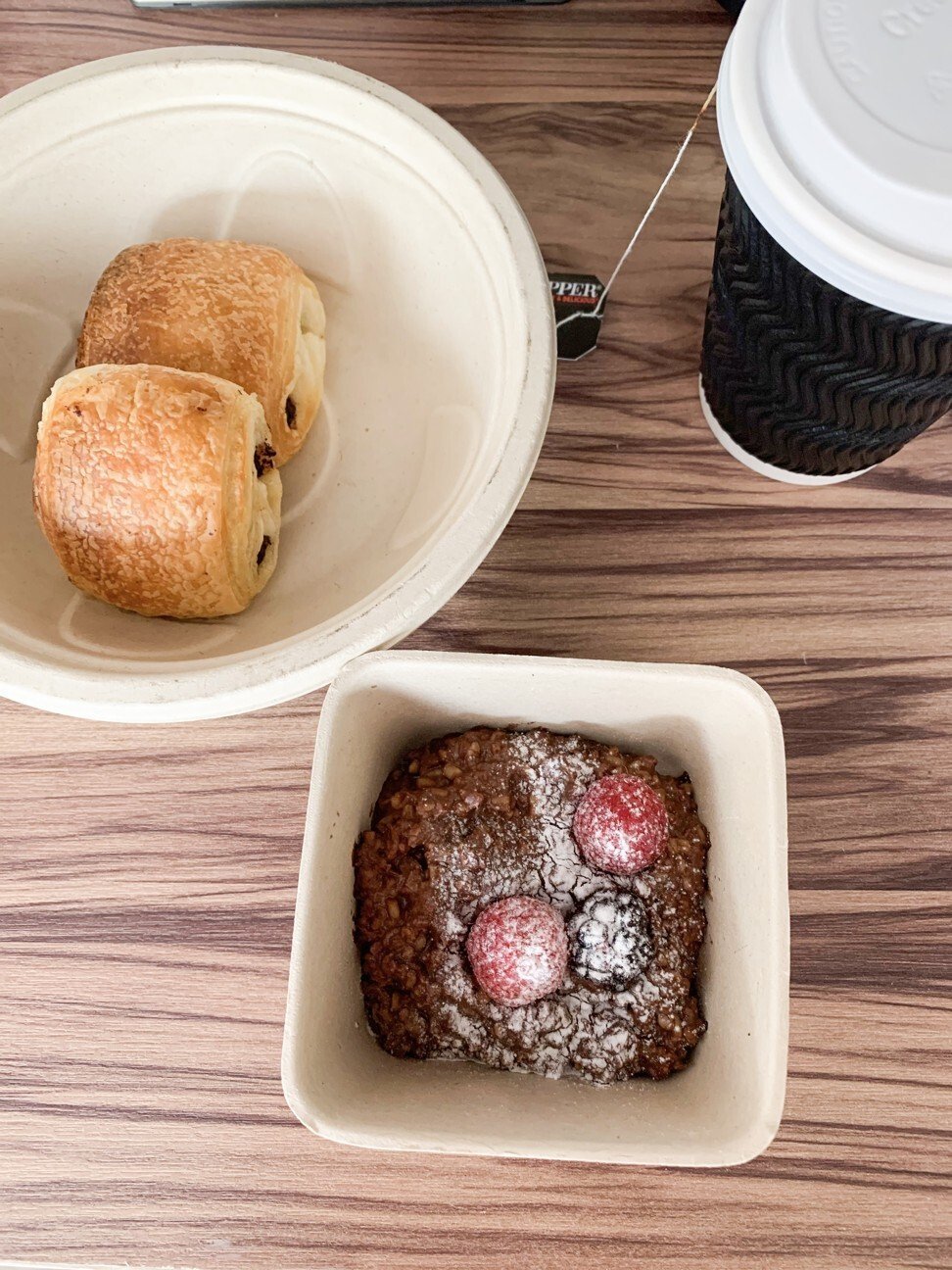 When we first made plans to see our families in Singapore, we were banking on a travel bubble that ended up bursting before we even took off. When 14 days of hotel quarantine became 21 – in an 11th-hour announcement that threw many travellers’ plans into disarray – we counted ourselves lucky because we had the means to get by.

No gain, only pain?

On my 17th day of confinement, Hong Kong awoke to confirmation that the authorities had locked down some 200 buildings in the Yau Tsim Mong area
of Kowloon to order mandatory Covid-19 testing for thousands of residents, mostly lower-income or elderly and living in subdivided flats. After two days, they had tested more than 7,000 people and found 13 infections. Officials suggested one reason for the low positivity rate could be because news of the lockdown had leaked and some residents had escaped the clutches of the city’s toughest restrictions yet.

Days later, authorities sealed off a section of Yau Ma Tei in a 12-hour “ambush-style lockdown”, where after testing 330 people, they found one infection. A similar exercise in North Point on Thursday found there were no infections among the 475 residents tested.

Health experts have since understandably questioned the wisdom of measures that seemed to cause more pain than gain for residents whose living conditions reflect permanent and deep-seated problems for the city. During the two-day lockdown, social workers could not enter the area to tend to the needy, employees could not leave to go to work, and those unable to cook had no access to hot food, only canned and packaged supplies distributed by the authorities.

At the risk of sounding entitled but prompted by personal experience, I would propose that similar questions be asked on behalf of those who have suffered the numerous downsides of a 21-day hotel quarantine, such as a lack of outdoor exercise, hunching over laptops in tiny workspaces and the financial burden of paying for a hotel stay and an empty apartment at the same time. 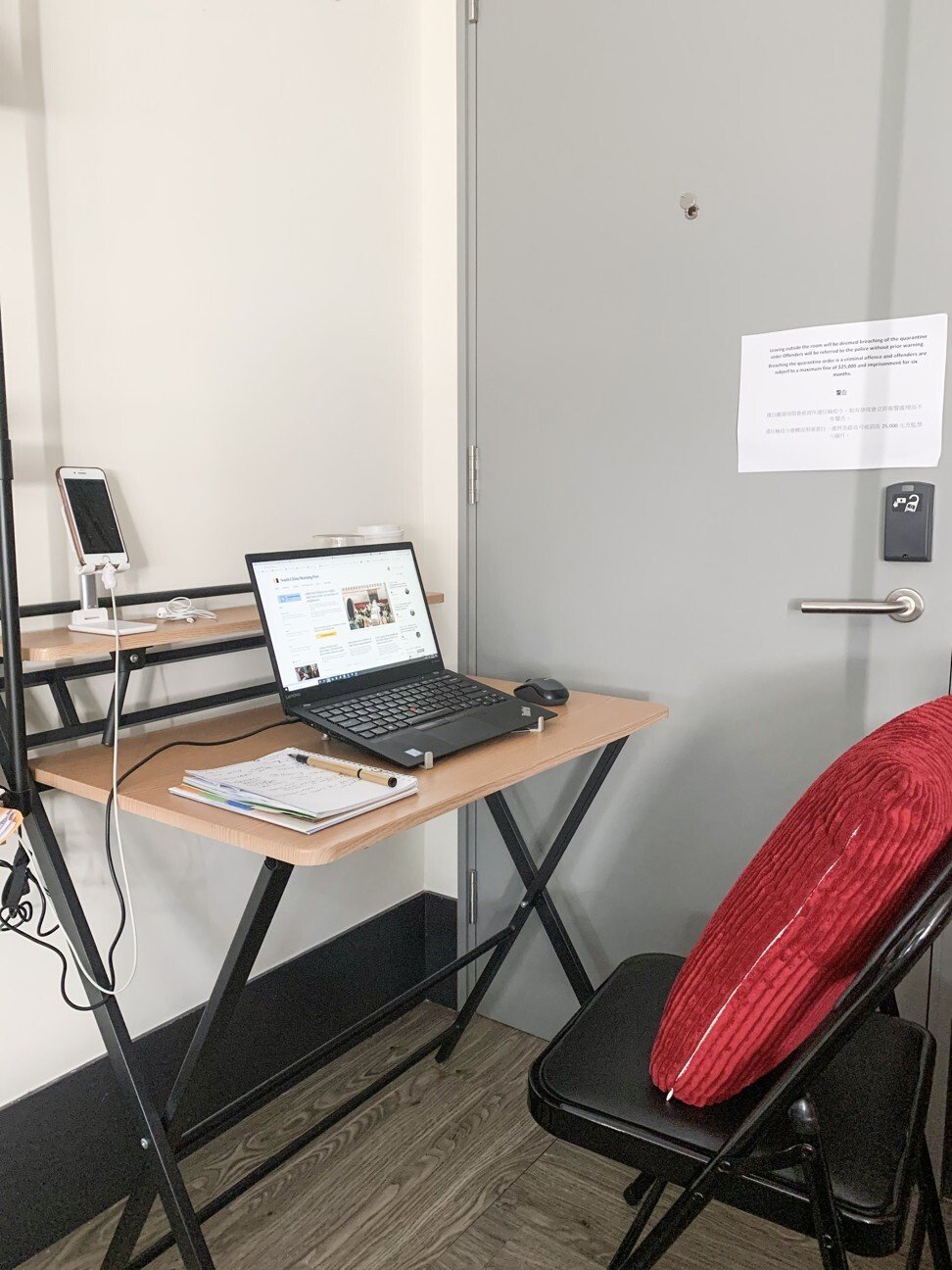 A makeshift home office set up in one corner of the writer’s hotel room.

Imported infections continue making up a small percentage of Hong Kong’s Covid-19 cases, possibly because the hotel quarantine rule has acted as a deterrent to unnecessary travel. Imported cases made up 7.7 per cent of infections in December; between January 1 and 28, it was 5.9 per cent.

Arrival statistics show that in the one-month period after the start of the 21-day hotel quarantine scheme on December 25, about 16,000 people entered Hong Kong. Ostensibly, all of them needed to be in the city, requiring them to conform to the rules of return. About 4,893 would have completed their 21st day of hotel quarantine – and three Covid-19 tests, one upon landing, one on Day 12 and one on Day 19 – as of Sunday, January 24.

How many tested positive on Day 12 or Day 19? In the absence of scientific proof that 21-day hotel quarantine kept the larger community safe from the coronavirus, and not just new Covid-19 variants, why wouldn’t 14 days in a hotel or spending the third week at home work just as well?

What, too, should we make of the failure to close existing social-distancing loopholes? No more than two can gather in a public place or restaurant but this is loosely enforced. There are no limits on how many can gather in private residences. Indeed, several infections from the superspreading dance cluster that fuelled the city’s fourth wave, driving cases to more than 10,000 today, were spread in people’s homes.

Neither has there been a demonstrated inclination to learn from best practices in terms of ensuring well-being. In New Zealand, returnees in hotels for 14 days can leave their rooms to exercise, though this is “strictly controlled” with people having to wear a single-use face mask and maintain a distance of two metres from others. 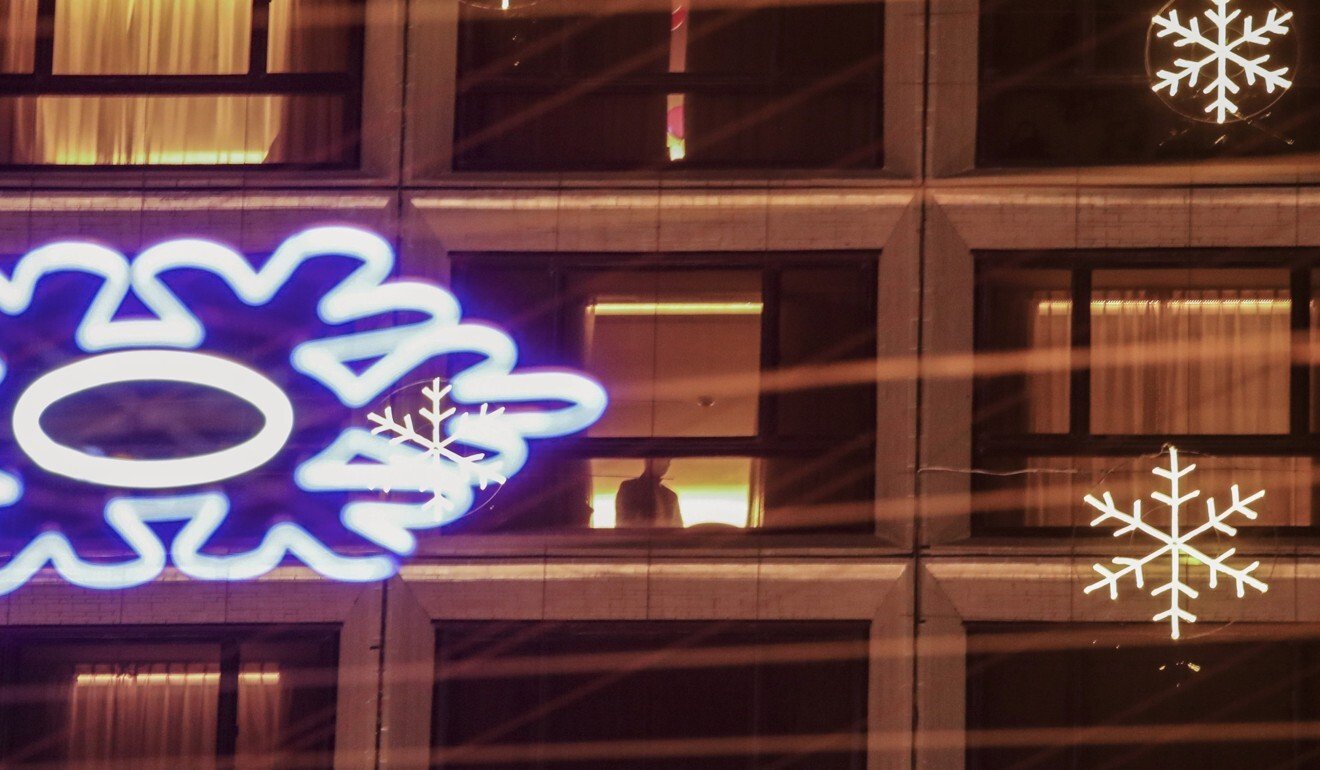 An occupant of a quarantine hotel in Tsim Sha Tsui.

In the past month, Hong Kong International Airport has seen more departures than arrivals. The net outflow of travellers in the past two weeks was more than 6,000. Some may have left for good but we can infer that thousands more are due to return in the coming weeks or months.

Hong Kong authorities need to offer better support for the city’s most vulnerable. But returning residents facing the financial and mental strain of 21-day hotel quarantine need help, too, beyond token expressions of support.

To the cynical, the world’s longest hotel quarantine could be a way for Hong Kong to show its political master Beijing that it is serious about clamping down on infections so that the border with mainland China can be reopened – which is crucial to the city’s economic recovery. Whichever way one looks at it, this is a mere band-aid slapped on an unrelenting health crisis, leaving Hong Kong residents trapped instead of feeling that they are contributing to a holistic system of community suppression of the pandemic.