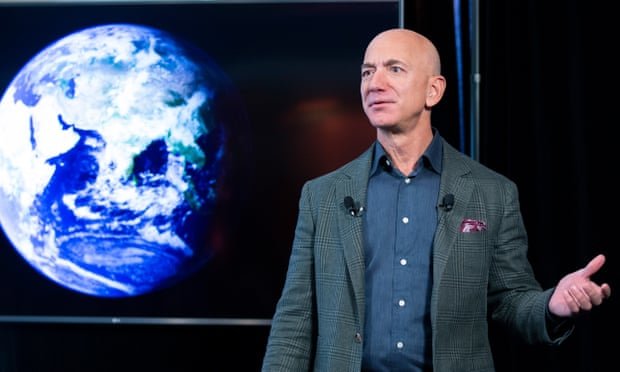 If the Amazon owner wants to give something back, he could look at staff welfare – and paying dues where he makes money (Editor comment: bullshit. If he pay taxes that money will go to finance politicians, bureaucrats and bribe. How much money from all the taxes really goes to the people?). I trust Jeff (and Bill Gates) to allocate the money to make the world a better place. Not politicians. They are in their position to get rich, not to serve the public).
Alexa, how can we save the planet? Artificial intelligence is not yet so far advanced that a robot on its own is going to halt and reverse the climate crisis. More capital, of both the human and the financial kind, needs to be invested in finding answers. That is largely the point of Amazon founder Jeff Bezos’s announcement that he will be donating $10bn (£7.7bn) to launch the Bezos Earth Fund. “This global initiative will fund scientists, activists, NGOs – any effort that offers a real possibility to help preserve and protect the natural world,” Bezos declared in an Instagram post. “We can save Earth.”

When you’re the richest man in the world – which, with a net worth estimated at about $115bn (£88.3bn), Bezos assuredly is – such philanthropic donations are entirely affordable. Indeed, you might say they are compulsory. “The man who dies rich dies disgraced,” said Andrew Carnegie, the steel magnate. Foundations in the name of the Ford, Rockefeller, Tata and more recently the Rausing (Tetrapak) families all point to that same instinct: the obligation to give. Bill Gates and Warren Buffett, both multibillionaires, are also among today’s biggest donors.

So there should be at least one, perhaps even two cheers for Bezos (unless such exertions produce an unwanted surge in CO2 emissions). Sceptics will want to pause for a moment, however.

Amazon is a great devouring beast of a business which has had a massive and not exactly positive impact on the world’s environment. Its treatment of staff is highly questionable. A freedom of information inquiry by the GMB union has found that more than 600 Amazon workers in the UK have been seriously injured (or narrowly escaped an accident) in the past three years – a finding that prompted Jack Dromey MP to say: “In my 30 years in the world of work I cannot remember any company clocking up so many injuries to its workers.”

Anyone who has seen the utterly bizarre Amazon advertisement with apparently contented staff, like extras from The Truman Show, declaring how happy they are with life at the company will only have had their suspicions about conditions there confirmed. The company may refer to its warehouses as “fulfilment centres”, but by and large it’s not the workers who are experiencing fulfilment.

And then there is the use of energy. Amazon is not just a giant retailer, it is also a vast data management and processing business. Its Amazon Web Services (AWS) is a huge concern all of its own (annual revenue of about $30bn). And it uses a lot of energy. In 2014 AWS committed to using only renewable energy to power its data centres, but it seems to have fallen far short. In 2018 the company as a whole announced it had reached 50% renewable energy usage, but in the same year Greenpeace claimed that, in the state of Virginia, AWS was using renewable energy for only 12% of its total needs.

If Amazon is so keen to hear from people about saving the planet, why did it recently threaten to fire employees who had spoken out about the company’s stance on energy matters? Amazon Employees for Climate Justice is continuing its protests, which in the past have included attempts to a push for a shareholder resolution to set a climate change plan. As one employee said: “The climate crisis is the greatest challenge we face, and the only way we can find solutions is by protecting people’s right to speak freely and disrupting the status quo.”

Where there’s muck there’s brass. And where there is an oligopolistic global giant changing the way we shop there are ethical concerns. This is the paradox at the heart of philanthropy. It is a fine thing to give. But how did you make your money? The dreadful concept of “giving something back” exposes the truth: if you feel the need to give something back perhaps it means you took too much in the first place.

It is better to have $10bn invested in the attempt to save the planet than not. Bezos will have done a lot of good if scientific research bears (sustainable, non-carbon and water-intensive) fruit. And who knows, maybe this investment is partly inspired by a wish to get back at one of the world’s biggest sources of fossil fuels, Saudi Arabia, with which he seems to have experienced a little difficulty lately.

But Bezos could also see to it that Amazon pays and treats its staff better, and expends less energy being “tax efficient”, paying its dues to state coffers around the world, in all those countries where the company is making so much money.