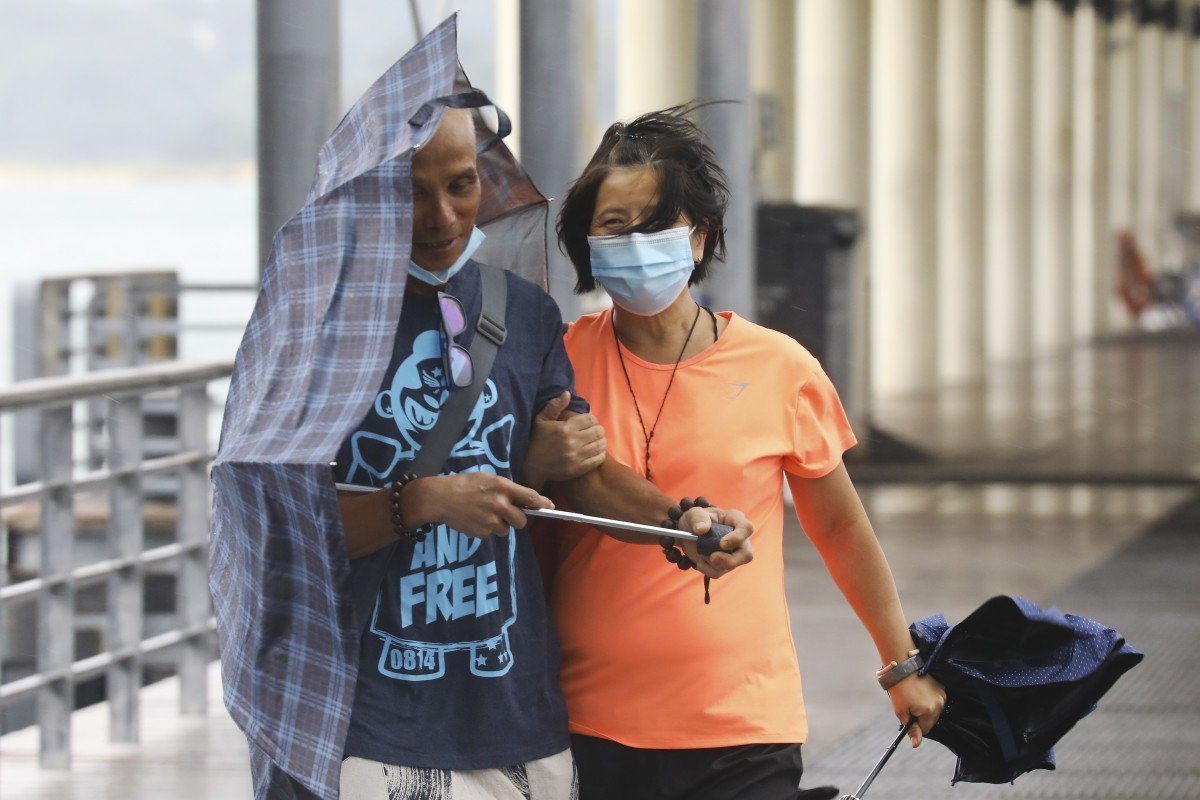 Why did Hong Kong issue the No 8 typhoon signal for Tropical Storm Nangka?

Weather conditions seemed mild in parts of Hong Kong for a No 8 signal, but experts point to ‘superimposition’ phenomenon.

Tropical Storm Nangka became the most distant cyclone from Hong Kong to trigger a No 8 typhoon signal in 60 years when the observatory raised the warning early on Tuesday, as the weather system swirled some 450km away from the city.

With the tropical storm having caused transport disruptions and school suspensions, the Post looks at the science behind the cyclone and why parts of the city are largely unaffected by strong wind or rain despite the high-level warning.

1. What is the impact of Tropical Storm Nangka as it passes far from the city?

The Hong Kong Observatory issued the No 8 northeast gale or storm warning at 5.40am and lowered it to the No 3 signal after 14 hours at 7.40pm.

The No 8 signal is the third highest and warns the city to expect winds with average speeds of 63km/h to 117km/h or higher, from the northeast quarter.

According to the Observatory, Nangka was centred about 530km to the southwest of the city at 2pm. The closest it came was early on Tuesday, when it was 440km away.

The city has been affected by three tropical cyclones so far this year, the first being Nuri in June, which attracted a No 3 signal.

Tropical Storm Nangka is the second this year to trigger a No 8 signal, following in the footsteps of Typhoon Higos in August.
Higos was ultimately raised to No 9, the second-highest tier of the system, while the storm was closest to Hong Kong for about six hours.

2. Why does Hong Kong not feel as windy and rainy as during previous No 8 signals?

“This is a characteristic of autumnal typhoons,” explained meteorologist and former Observatory director Lam Chiu-ying.

“It just so happened that the effects of the typhoon and northeast monsoon have overlapped, what we call ‘superimposition’, which will bring gale-force winds to the south of Hong Kong.”

That phenomenon had helped widen the storm’s reach, hitting part of the city with the gale-force winds, Lam said.

“Basically, it is too close to ignore,” Lam said. “It is only people who live north of Lion Rock that feel unaffected by it,” he added. 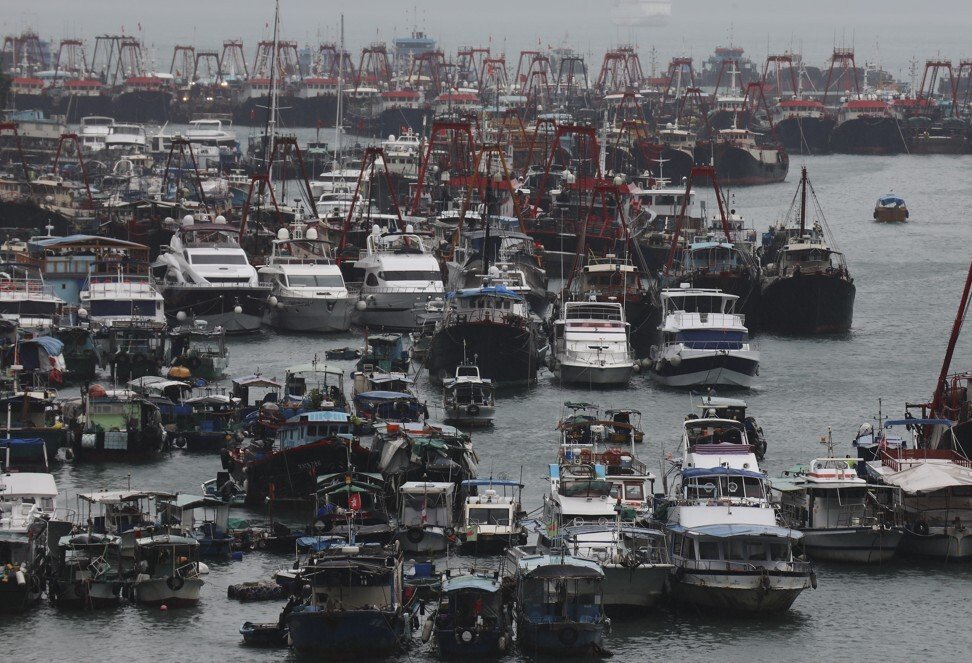 Boats moored in Aberdeen Typhoon Shelter after the No 8 signal was raised in Hong Kong for Tropical Storm Nangka.

Woo Wang-chun, a senior scientific officer at the Hong Kong Observatory, confirmed Nangka was the most distant typhoon to raise a No 8 signal since complete record-keeping began in 1960.

In 2014, Typhoon Kalmaegi also activated a No 8 signal when it was 370km away from the city.

Woo said winds were expected to remain strong until the typhoon made landfall in the vicinity of Hainan.

3. Will Hongkongers still get the day off as Covid-19 reshapes working?

In the past, a No 8 signal might have been welcomed by some of the city’s white-collar workforce as companies let them take a day off. But the Covid-19 pandemic has forced companies to introduce work-from-home policies, which can now be rolled out in other scenarios.

One civil servant said he was working from home on Tuesday, even though he and nearly 180,000 other public officers were not required to go to the office during a No 8 typhoon signal.

“I am home, just like those days working from home during Covid-19, and answering emails,” he said, speaking on condition of anonymity. 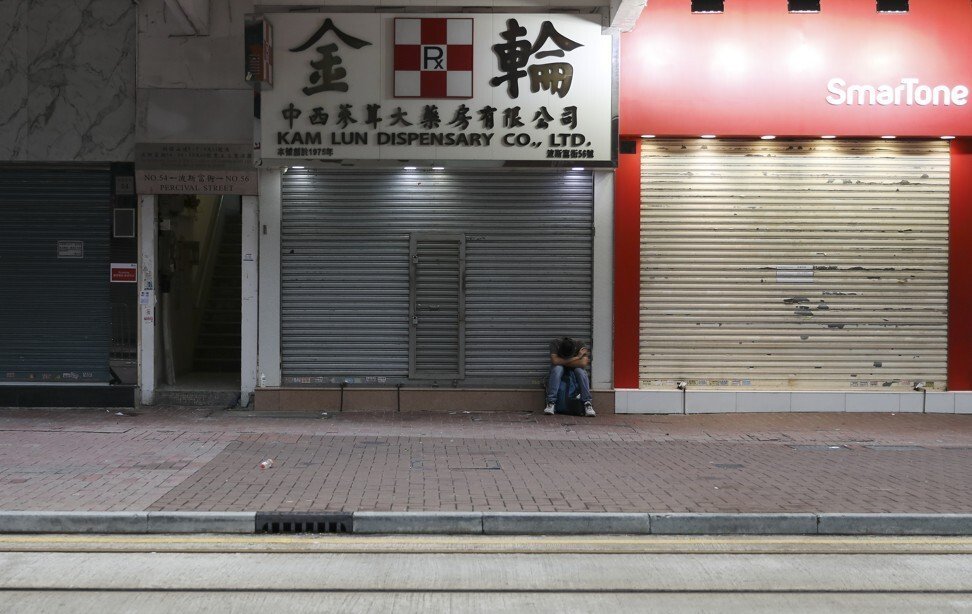 Many streets were empty after the early morning raising of the No 8 signal.

He said that he had effectively had the day off when serious storms hit Hong Kong in the days before working remotely became the norm.

Banking giant HSBC, meanwhile, did not explicitly tell staff to work from home, simply asking them to check the weather before commuting to the office.

But the increasing practice of adopting flexible workplaces during the pandemic and last year’s anti-government protests meant staff were likely to work from home, according to a full-time member of staff who did not want to be named.

One of the city’s largest banks, Hang Seng Bank, said: “Staff are at home, they can continue to work remotely with work-from-home capability.”

Employees of the non-governmental organisation Good Lab also used to take the day off for severe tropical cyclones, but on Tuesday they too had to carry out their duties from home.

“We were not asked to, but it seems there is an unspoken consensus that the team will be working remotely today,” said one worker, who wished to remain anonymous.

“I feel alright, I have tasks to complete anyway, so I do want to spend time working on it.”

4. What is the impact on schools and universities?

The government announced on Tuesday morning that all classes at day schools were suspended.

For Chinese University undergraduate students, all online classes and exams would proceed as planned regardless of the weather, unless course teachers advised otherwise based on any concerns they had with the alternative arrangements, a spokesman said.