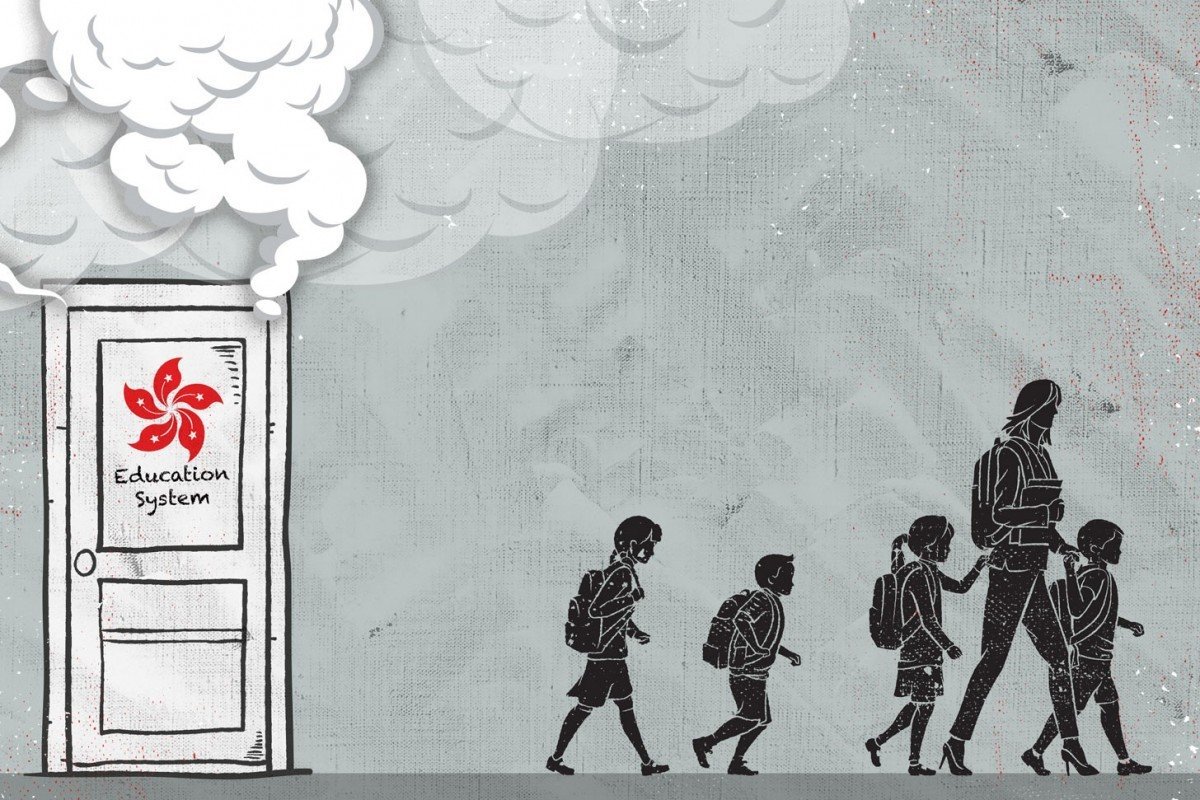 Thousands of children make the daily journey from Shenzhen to classrooms across the border but unrest in the city has prompted some families to consider other options. Tensions over political differences are raising concerns about the future of education in the city

This past summer was the point of no return for Shenzhen mother Rebecca Wen. For three years, Wen had crossed the Lo Wu checkpoint into Hong Kong to take her son to kindergarten, but the months of unrest involving high school and university students prompted her to question an education system in which she once had great confidence.

The turmoil compounded concerns that her six-year-old son would be taught – in her words – “from biased textbooks and by teachers prejudiced against the Chinese mainland”.

As a result, she decided to give up her son’s place at a top-ranking primary school in Tai Po and send him to a private boarding school in Shenzhen.

“There are 28 years to go until 2047, when Hong Kong’s separate system ends, but how can my son wait for 28 years to finally get an objective understanding of China?” Wen said.

“I am more confident in the development of Shenzhen and I think my son needs to be part of the city from the time he is young.”

Until this summer, Wen’s son – whose father is from Hong Kong – was one of nearly 30,000 children who cross the border each day from Shenzhen to go to school in neighbouring Hong Kong.

The phenomenon emerged in the 1980s and continued for about two decades as cross-border marriages flourished.

Under Hong Kong regulations, children born in the city are entitled to attend Hong Kong schools, even if they live on the mainland, and the trend was seen as a sign of the city’s educational strength.


Although there are no official figures, Chinese state media and local news outlets report that the number now making that journey has dropped since the start of the school year in September.

Observers said the decision by some mainland parents to take their children out of the Hong Kong education system was the result of a number of factors, including deep parental anxiety about growing divisions in society, concerns about the impact of those divisions on their children’s development, and questions about the values being promoted at schools.

But there are also factors on the mainland pulling parents back.

He Wen, a Hong Kong affairs specialist at the Shanghai Institute for East Asia Studies, said some parents withdrew their children over fears of bullying due to political differences between parents, while others left the city hoping to integrate deeper and earlier with Chinese mainland.

“Hong Kong has a different political and educational system, which in itself is not a problem, but if it deliberately instils an anti-China attitude in the next generation, then it would be unacceptable for some parents,” He said.

Concerns about the effects of the protests on children were underlined by a report released in September by the Hong Kong Federation of Education Workers. In a survey of 168 schools, the federation found that more than 40 per cent of those polled reported emotional problems among students caused by the ongoing anti-government protests. Some six per cent of the schools also reported bullying among students over the issue.

That month, Hong Kong’s education authority also said it received 58 complaints against teachers on protest-related issues and warned two teachers for swearing at the family members of police officers, amid accusations of police using excessive force against protesters.

A kindergarten teacher was charged over an alleged assault of a three-year-old girl, whose relative is a police officer.

Federation chairman Wong Kam-leung said the protest activities organised in schools, such as boycotts and human chains, were to blame for many of the problems.

“We firmly oppose the idea of bringing political demands into campuses,” he said.

For Wen, the Shenzhen mother, a major contributing factor is the textbooks used for liberal studies, a compulsory course in Hong Kong’s high schools.

When the protests escalated in July, Wen borrowed some of the texts from a friend to read.

“The textbooks are a little too extreme – they just mention the negative sides of mainland China such as corruption and food safety, while failing to mention the leaps and bounds in improvements in the mainland. It’s a very unbalanced picture of China,” she said.

Nevertheless, there were still some benefits to the Hong Kong system.

“If we don’t look at the political factors, Hong Kong’s education is more advanced than that in mainland China,” Wen said.
She said the use of experiential learning in Hong Kong’s schools helped students better recognise and gain knowledge, while schools on the mainland focused more on cognitive and technical skills.

Yang Hui, a mother of two cross-border children from Shenzhen, agreed that the education in Hong Kong was good but she was still worried about political divisions in the city.

“Most of the teachers have stayed politically neutral [in the schools of my children], but some of them are quite extreme, and I’m worried my son will be negatively influenced by them,” Yang said.

According to a study by the Economist Intelligence Unit last year, the education system in Hong Kong was more competitive than that on the mainland. In the study of the 15-24 age group, Hong Kong ranked 15th while China came in 39th of the 50 economies examined.

Hong Kong is also attractive to some mainland parents struggling to get their children into schools in Shenzhen.

School entry on the mainland is heavily influenced by a system of household registration known as hukou. Children without a Shenzhen hukou, including many of those born in Hong Kong, have a much lower priority on the list for school places in the border city.

Li Mingqing, a mainland mother of a teenager born in Hong Kong and without a Shenzhen hukou, said studying in Shenzhen was not a choice for her son because he could not get the grades to get into a good public school.

“And the positions in Shenzhen’s private and public schools are so limited,” she said.

Nevertheless, analysts said the standard of education was improving on the mainland and there was more confidence in its future.

City University professor James Sung Lap-kung, who is also a political commentator, said that while social unrest was a catalyst, multiple factors were attracting parents in general to choose schools on the mainland.

“The Chinese mainland has a big job market, its education industry has improved a lot with many private and international schools setting up in the past two decades, and universities in China can offer some programmes that don’t exist in Hong Kong,” Sung said.

“For some parents, sending their children to a mainland school can be both good for their own and the kids’ career development.”

One 36-year-old woman, who would only be identified by her surname Shen, is among those making the move back to the mainland after more than a decade of living in Hong Kong.

Shen said she would return to her hometown in Jiangsu province in eastern China with her two Hong Kong-born children, to help run the family businesses.

“The past four months have made me very upset and anxious and I value the opportunity to work on the mainland,” Shen said, adding that she would enrol her two children in mainland primary schools.

A business professor at a Hong Kong university, surnamed Wu, said he hoped that leading schools on the mainland could open branches in Hong Kong, expanding education options for parents in the city.

“Model high schools in mainland China such as Beijing’s Renmin University’s affiliated high school and Changsha’s Changjun High School are hot schools and would must be highly welcomed by us mainlanders,” he said.

He also said that Hong Kong students in his classes had better English than their mainland classmates but appeared to have less confidence.

“To my surprise, it’s the mainland students who get into heated exchanges with students from the United States and European Union, though their English is not that fluent,” he said.

“I can sense a low confidence level among the local students, who are afraid their viewpoints cannot be echoed by other classmates. And it’s no wonder given that the locals are living in a high-pressure city where basic living and even survival is a challenge.”

Li Xiaobing, an associate professor at Nankai University’s law school, said the decision to opt for a mainland education reflected fears and concerns about the uncertainty confronting Hong Kong.

“Education is an investment in the future, and leaving Hong Kong schools is a signal that some parents are giving up Hong Kong to embrace the mainland,” Li said.

But Yang, the mother-of-two in Shenzhen, shares one hope in common with parents in Hong Kong – she wants the unrest in the city to end soon.