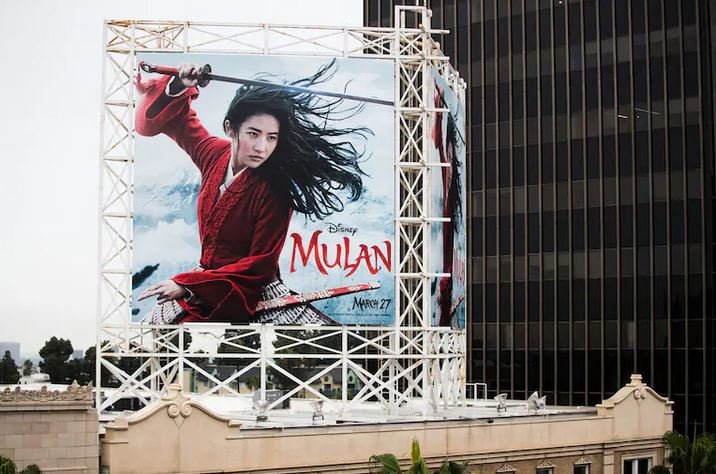 Calls for #BoycottMulan reignited this week amid the release of Disney's live-action film. Pro-democracy activists from Hong Kong, Taiwan and Thailand have been leading the charge.

After months of delays, the release of Disney’s live-action remake of “Mulan” has delighted some fans of the 1998 animated movie, which is loosely based on a Chinese folk tale and its fierce heroine.

But it has left others deeply divided after the actress playing Mulan, Liu Yifei, voiced support in August 2019 for China’s crackdown on pro-democracy activists in Hong Kong.

Since spring 2019, demonstrators have held waves of massive protests against Beijing’s growing influence over Hong Kong’s autonomy and freedoms under the 1997 handover of the former British colony to Beijing. Rights groups have accused Hong Kong, backed by Beijing, of using excessive force and other abuses in their response.

Calls for #BoycottMulan consequently reignited this week amid the movie’s release. This time, pro-democracy activists from Hong Kong, in addition to nearby Taiwan and Thailand, have been leading the charge.

What did Liu Yifei say?

Liu, who is a naturalized American citizen but moved back to China as a teenager, shared a post from a state-run Beijing newspaper on the Chinese social media site Weibo which expressed support for the Hong Kong police’s heavy-handed response to pro-democracy protesters.

“I also support Hong Kong police. You can beat me up now,” she wrote in Mandarin. “What a shame for Hong Kong,” she added in English.

The comment “you can beat me up now” was probably a reference to an incident in which protesters that month assaulted a Chinese state-media reporter, who reportedly said the phrase during the altercation.

Liu received positive responses on Weibo, which is highly censored. But outside of China, many were angered by the actress’s political comments and called for moviegoers to boycott her film.

In July, another “Mulan” actor, Donnie Yen, shared a Facebook post celebrating the 23rd anniversary of the end of British colonial rule over Hong Kong and the return of the territory to China.

What’s the connection between Mulan and pro-democracy protests?

Separate from Liu’s comments, the story of Mulan - a strong woman who defies societal restrictions in 6th- or 7th-century China to fight for her family and country - has resonated with many pro-democracy protesters across Asia.

Last month, authorities arrested a prominent Hong Kong activist, Agnes Chow, using a controversial new security law recently imposed by Beijing. But Chow’s supporters turned the narrative on its head by dubbing her “the real Mulan” because of her efforts to fight for what she thinks is right.

Elsewhere, “Mulan” has been lauded for its representation of Asian actors. But on Friday, Hong Kong pro-democracy activist Joshua Wong reiterated his support for connecting boycotts of the movie with Hong Kong’s political struggle. “I urge everyone who believes in human rights to #BoycottMulan,” he tweeted.

This film is released today. But because Disney kowtows to Beijing, and because Liu Yifei openly and proudly endorses police brutality in Hong Kong, I urge everyone who believes in human rights to #BoycottMulan. https://t.co/utmP1tIWNa

Hong Kong is not the only place in Asia where pro-democracy activists have been organizing. In Thailand, the streets have been filled in recent weeks with student-led protests calling for more democratic restructuring. The self-ruling island of Taiwan also has long-standing tensions with Beijing.

Activists from Thailand, Taiwan and Hong Kong have consequently joined online under #MilkTeaAlliance - a reference to milk tea drinks beloved by all three places - to connect their struggles.

On social media, Netiwit Chotiphatphaisal, a Thai student activist leader, has been urging his followers to boycott the movie. “I invite everyone to #boycottMulan #banMulan to make Disney and the Chinese government know that state violence against the people is unacceptable,” he wrote in a tweet.

How have the filmmakers responded?

On Friday, Jason T. Reed, a former Disney executive and one of movie’s producers, told Yahoo News that he supported Liu.

“Well, I think that first off, it’s a very complicated situation for performers who live in China and work in China,” he said. “Obviously, the tensions between the two entities is very complicated.”