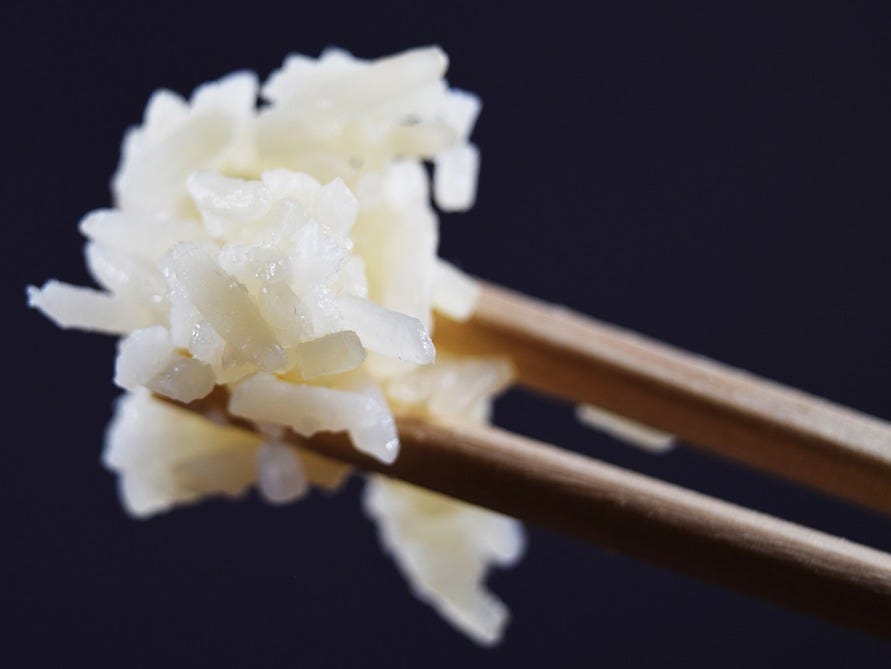 White rice is less nutritious than brown rice because it lacks the most nutrient-dense parts of rice: the bran and germ.

Both white and brown rice can be dangerous in large amounts – especially for children – because they may contain traces of arsenic, a carcinogen.

More than half of the world’s population relies on rice as a staple food. In 2018, 485 million metric tons of rice were produced globally.

White rice is much more common than brown rice because it has a longer shelf life and transports more easily. However, white rice is also less nutritious. Here’s what you need to know.

The bran, which is the outer edible layer of the rice grain.

The germ, which is the reproductive part of the grain.
These not only give brown rice its color, but they’re also the most nutrient-dense parts of rice. One downside is that the fat in the bran and germ makes brown rice spoil more quickly than white rice. The average shelf life for brown rice is about six months.

By contrast, white rice is what’s left behind after the grain is polished and the bran and germ are removed. This makes white rice cook faster and gives it a longer shelf life. It also means that white rice contains fewer nutrients than brown rice.

But this does not mean that white rice is inherently bad for you, though it is less healthy, says Elizabeth Ryan, a researcher at Colorado State University who studies the nutrients in rice bran.

“At the end of the day, eating whole grains is always going to be important,” Ryan said.

In fact, when you get rid of the bran and germ in rice, here’s what you’re really removing nutrition-wise:

Calcium, which is important for teeth and bone health.

Fat, which consists of healthy unsaturated fats that are important for cardiovascular health.
Phosphorus, which collaborates with calcium to form strong bones and teeth.
Vitamins B1 (thiamine) and B3 (niacin), which helps keep the nervous system functioning properly.
Protein, which helps build muscle and is essential for growth and development.
Magnesium, which is important for proper neurological function, among many other benefits.
For comparison, here’s how much nutrition you get from a cup of cooked white rice versus brown.

Benefits of eating brown rice instead of white

Ryan is specifically interested in the disease-preventing and nutritional benefits of eating rice bran. Her research has shown that nutrients in rice bran could help protect against colorectal cancer. The bran makes brown rice rich in compounds called phytochemicals that have antioxidant and anti-inflammatory properties.

“There’s a lot of phytochemicals in brown rice that are not in white rice,” she says.

While most of the calories in white and brown rice come from carbohydrates, white rice has a higher glycemic index than brown rice. This means that a serving of white rice provides a quicker blood sugar spike, which, according to Harvard Medical School, “has almost the same effect as eating pure table sugar.” Brown rice has a lower glycemic index, which is better for warding off diseases like diabetes.

Overall, Ryan says that when out grabbing lunch and offered the option of white rice or brown, “if there’s an opportunity to substitute it with brown rice, you are improving your whole-grain intake.”

In the past decade, rice has gotten attention for being a grain that is naturally contaminated with arsenic, a carcinogen.

In 2012 Consumer Reports tested brown rice, white rice, and rice products available in the supermarket and found a wide variety had measurable levels of arsenic in them. In a follow-up, in 2014, it reported that one serving of many rice cereal and pasta products contained “over the maximum amount of rice we recommend they should have in a week.”

Both white and brown rice contain arsenic from the environment. The amount of arsenic that is incorporated into the rice depends on how much of the element is in the soil, which varies regionally. For example, Consumer Reports found the lowest levels of arsenic in basmati rice from California, while the highest levels were in rice from Texas.

In 2016, the Food and Drug Administration issued draft guidance to manufacturers to limit arsenic in rice cereal for infants. The FDA recommends that adults and children continue to eat rice products, but make sure they are also eating a varied diet of whole grains like wheat, oats, and barley, saying that “if there are substances in food (like arsenic) where reducing exposure is prudent, you’re minimizing that exposure.”

Washing brown rice, cooking it in extra water, and then rinsing it again will get rid of around 50% of arsenic, but will also wash away some of the more beneficial nutrients.