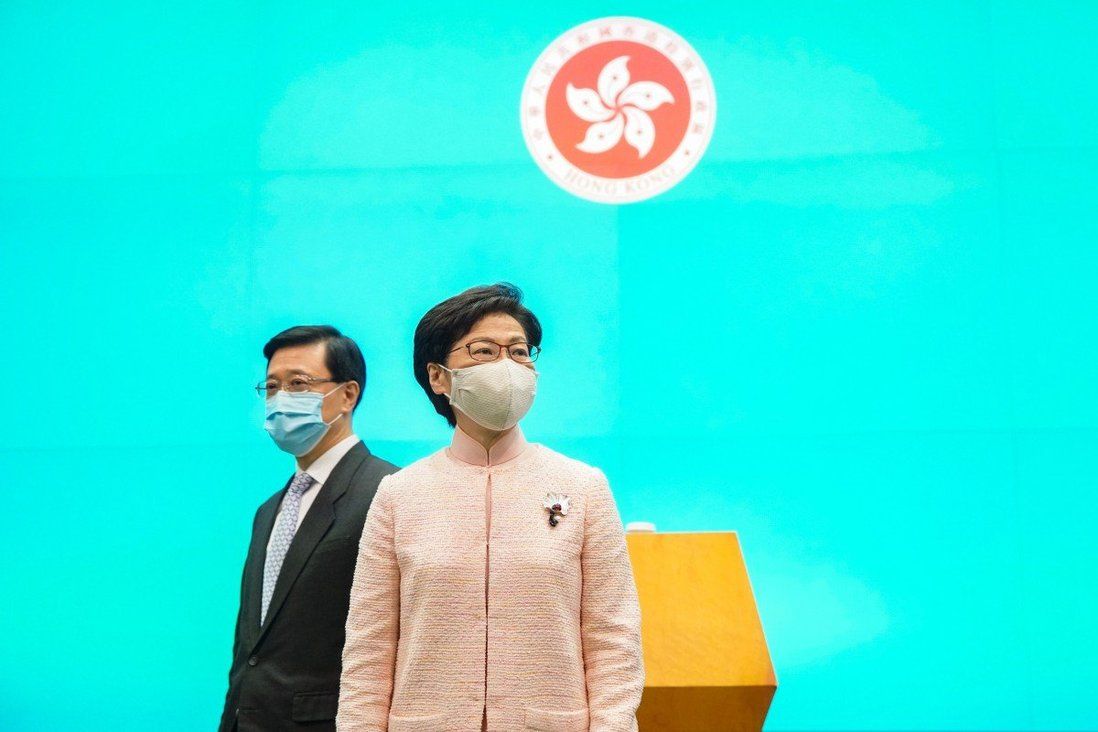 Where is Hong Kong’s chief secretary? Why Beijing is slow to appoint a new No 2

The delay in appointing an acting chief secretary this time round has left even top officials perplexed. The temporary absence of a No 2 official in Hong Kong would not leave the government hamstrung, some analysts say.
Beijing has yet to appoint Hong Kong’s new No 2 official as it wants to ensure a smooth transition of governments and also not place the outgoing leader in an awkward situation of having her choice rejected, analysts have said.

Observers also said even though the government had yet to have an acting chief secretary, it would not be hamstrung, as Chief Executive Carrie Lam Cheng Yuet-ngor explained the work of the No 2 official would be taken up by her and other principal officials.

“The chief secretary’s role is mainly to act as a coordinator in the cabinet … The administration would not bump into big problems under the temporary vacancy of the post,” said Ronny Tong Ka-wah, an adviser to the city leader on her de facto cabinet, the Executive Council.

After John Lee Ka-chiu, a career police officer, tendered his resignation as Chief Secretary on Wednesday, Lam said that she had followed Article 48(5) of the Basic Law in recommending Lee’s exit, as well as nominating a successor for the central government to consider.

However, when Xinhua reported on Friday that his resignation had been approved, it stopped short of naming a new chief secretary, leaving political watchers perplexed as to what was going on behind the scenes.

A source close to the government said even many top officials in the administration had no idea why there was no appointment of a new chief secretary.

“One legitimate explanation is that Beijing may have a better option from what Lam has suggested,” the source said. “It also has to depend on whether Beijing thinks there is a need to appoint someone as the remaining time is short.”

A Beijing-based official source also confirmed that Lam had proposed a candidate, and the recommendation was being “taken into consideration”.

“The current overarching long-term political task is to form a new team to govern Hong Kong under a new Chief Executive, so we need to look at every aspect ... The person [recommended by Lam] might not fit the big picture,” he said, declining to reveal as to when the appointment would be made.

The delay this time stands in stark contrast with past practices.

In January 2017, when Carrie Lam resigned to prepare for the city’s leadership race, Beijing also appointed then labour and welfare minister Matthew Cheung Kin-chung within four days to succeed her. Cheung stayed in the position for more than four years, until he was replaced by John Lee in June last year.

In a media briefing on Monday, both Lee and Tang declined to comment on how the government would operate without a chief secretary. The latter is currently a standing committee member of the Chinese People’s Political Consultative Conference and a nominator for Lee.

Tong said the instances in 2011 and 2017 could not be compared with the current situation, given that the incumbent government was now less than three months away from ending its tenure.

“The chief secretary position is also increasingly becoming a stepping stone to the city’s leadership. Beijing must consider this issue very carefully.”

After Lee resigned, Lam had said that while the city’s government had previously named officials to take up acting positions “for administrative convenience”, this time she felt that it was more appropriate for Beijing to consider appointing a chief secretary officially.

Analysts noted that Lam had in the past favoured veteran bureaucrats, such as civil service chief Patrick Nip Tak-kuen and commerce minister Edward Yau Tang-wah, for key positions. Yet in the past week, speculation mounted over two former disciplined services chiefs – security minister Chris Tang Ping-keung and mainland affairs chief Erick Tsang Kwok-wai – as possible choices for chief secretary. The Post was unable to confirm the two names with sources.

Song Sio-chong, a professor at Shenzhen University’s Centre for Basic Laws of Hong Kong and Macau, said that even though Lam did not disclose who she recommended, it appeared that she named someone Beijing was unsure or had reservations about.

“Beijing would rather leave it vacant until July at the latest than name someone Lee does not prefer,” he said.

“The central government could appoint someone else as chief secretary, but people could find out that Lam’s nomination was ignored, and that would be embarrassing for the outgoing leader.”

Song also said that as the chief secretary is a key position in the city’s administration, it was “not ideal” for it to be left vacant.

Ivan Choy Chi-keung, a political scientist at the Chinese University, also believed that Beijing had the city’s next government in mind when it delayed the appointment of an acting chief secretary. But he said Lam’s administration would not necessarily be hindered by the temporary absence of a chief secretary.

“It’s not ideal for the post to be left vacant, but the impact would not be significant,” he said.

Choy argued that the chief secretary had been assigned relatively fewer important ex-officio and statutory positions, when compared with the financial secretary.

He said, for instance, while the finance chief has the power to appoint key public posts such as the Monetary Authority’s chief executive, the chief secretary’s top responsibilities include chairing the Candidate Eligibility Review Committee, and making exemptions necessary for anti-epidemic work and other issues of public interest.

But Lam had recently said that she would be appointing new members to the vetting committee, which did not need to be chaired by the chief secretary.

She also said she would appoint other officials to share the chief secretary’s administrative work, such as chairing international coordination meetings and orchestrating the events celebrating the 25th anniversary of Hong Kong’s return from British rule on July 1, 1997.

Tam Yiu-chung, director of Lee’s campaign office, said on Sunday that the former official could not stage a physical press conference to declare his bid for the city’s leadership because only the chief secretary could waive hopefuls from social-distancing rules. “Even the chief executive could not do anything about it,” Tam said.

The government issued a statement on the same day to clarify that the chief executive could assign another official to approve applications for exemptions, as provided for in the law.

On Monday, at her daily press conference, Lam insisted the delay in appointment was a non-issue, not least for the election.

“If any candidate’s campaign office wishes to seek any exemptions, which are in the public interest – and because we want this election to be smooth, efficient, lawful – then they can approach the Hong Kong SAR Government,” she said.

“The easy way is to approach the CE’s office or the director of the Chief Executive’s office.”
Add Comment