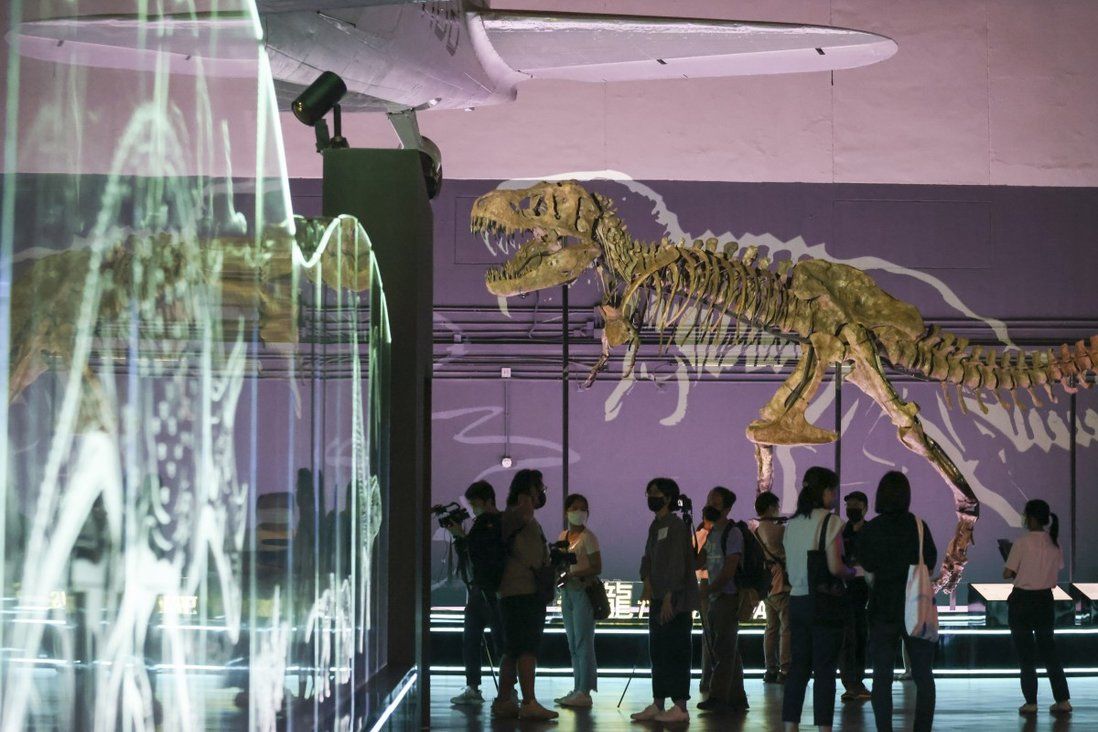 Visitors can check out the fossils of eight dinosaur species and get a chance to ‘gently touch’ an authentic leg bone belonging to the sauropod family.

The exhibition is among the activities sponsored by the Hong Kong Jockey Club’s donation of HK$630 million (US$80.3 million) to the government to celebrate the 25th anniversary of Hong Kong’s return to Chinese rule. It will run until November 16.

Here is what you need to know about the exhibition. 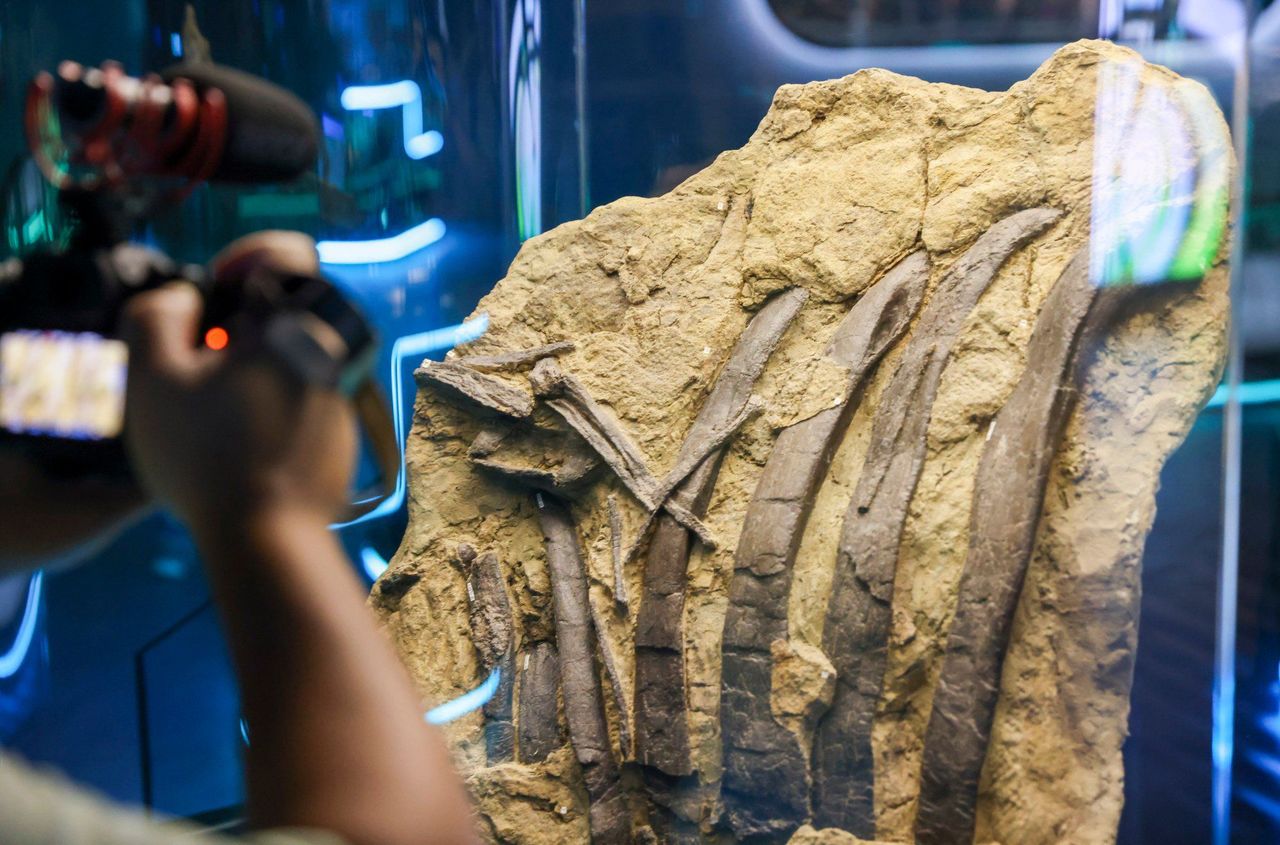 Eight dinosaur species, including original and reconstructed skeletons, are featured at the exhibition.

1. What species are showcased and where were they discovered?

Visitors can check out the fossils of eight dinosaur species, including original skeletons of a Diplodocus, an Allosaurus, a Hesperosaurus and a baby Sauropod, which are all from the Late Jurassic Epoch from about 150 million years ago, and were discovered in Wyoming in the United States.

The reconstructed skeleton of a Spinosaurus, from the Cretaceous Period about 100 to 93 million years ago and found in Kem Kem Beds in Morocco, is another species being featured at the museum.

The exhibition also showcases the reconstructed skeleton of a Hatzegopteryx and the original skeleton of a Triceratops – both species were of the Late Cretaceous Epoch from 66 million years ago, and found in Romania and the United States, respectively.

The original skeleton of Tyrannosaurus, which was among the last of the dinosaurs, is also one of the displays. It was unearthed in South Dakota in the US and is from the Late Cretaceous Epoch from 68 to 66 million years ago. 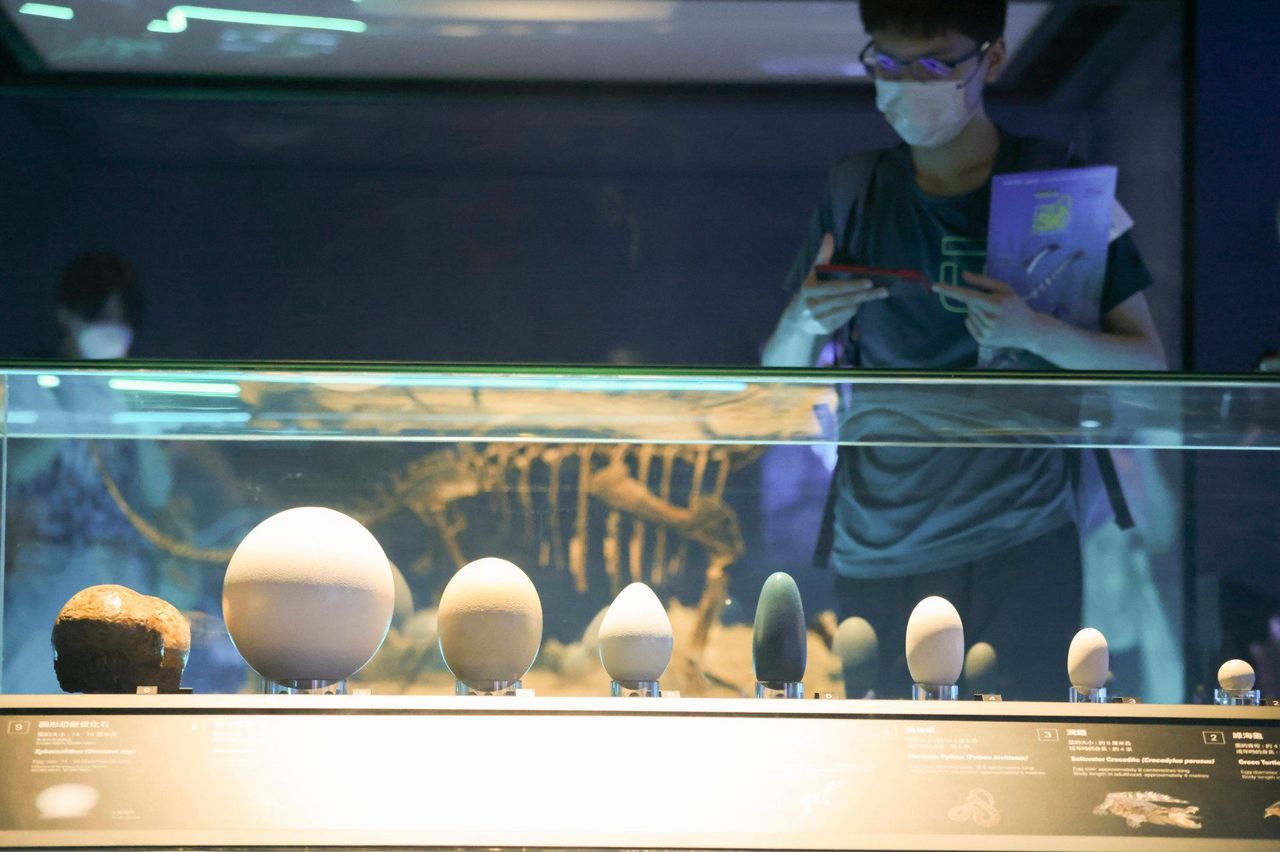 The dinosaur exhibition will run until November 16.

2. What is so special about this exhibition?

Seven fossil skeletons, except the Tyrannosaurus, are on display in Hong Kong for the first time. The Allosaurus named “Big Al 2” is the most complete skeleton of the carnivorous species yet found – it has a 99 per cent complete bone count and only the tip of its tail is missing.

The baby Sauropod, known as “Toni”, is the second complete original skeleton, with a 95 per cent completeness in terms of bone count.

Visitors can also “gently touch” an authentic leg bone belonging to the Sauropod family that is 150 million years old. The find, from Wyoming, is not part of the eight gigantic fossils.

“We want visitors to feel the fossil, that is very important for the museum’s educational role,” said museum director Paulina Chan Shuk-man, adding that there would be enough security to ensure people were careful when touching the bone.

She said the bone structure was “reinforced” with glue and other protective material before being placed on display, so gentle touching would not damage it. 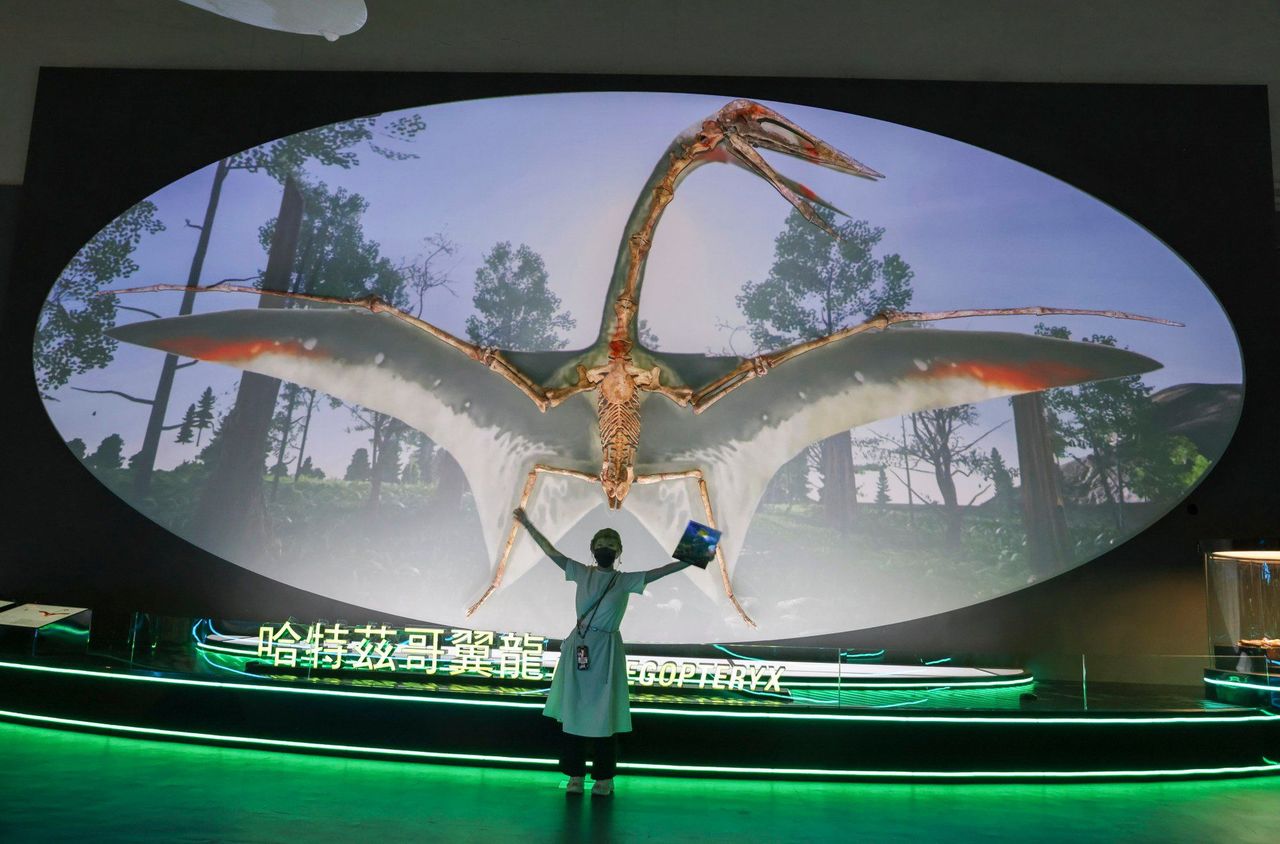 The museum has dedicated nearly 22,000 sq ft of exhibition space to accommodate the dinosaur fossils.

3. Were there any challenges in handling the exhibits?

The museum took a year to plan the project, while the installation of the fossils required up to three weeks. Chan said the height and space constraints were the biggest challenges for this exhibition as each of the dinosaurs was about 4 metres (13 feet) tall.

These dinosaur exhibits come from overseas museums and academic organisations, including the Aathal Dinosaur Museum and the University of Zurich in Switzerland, as well as the University of Casablanca in Morocco. 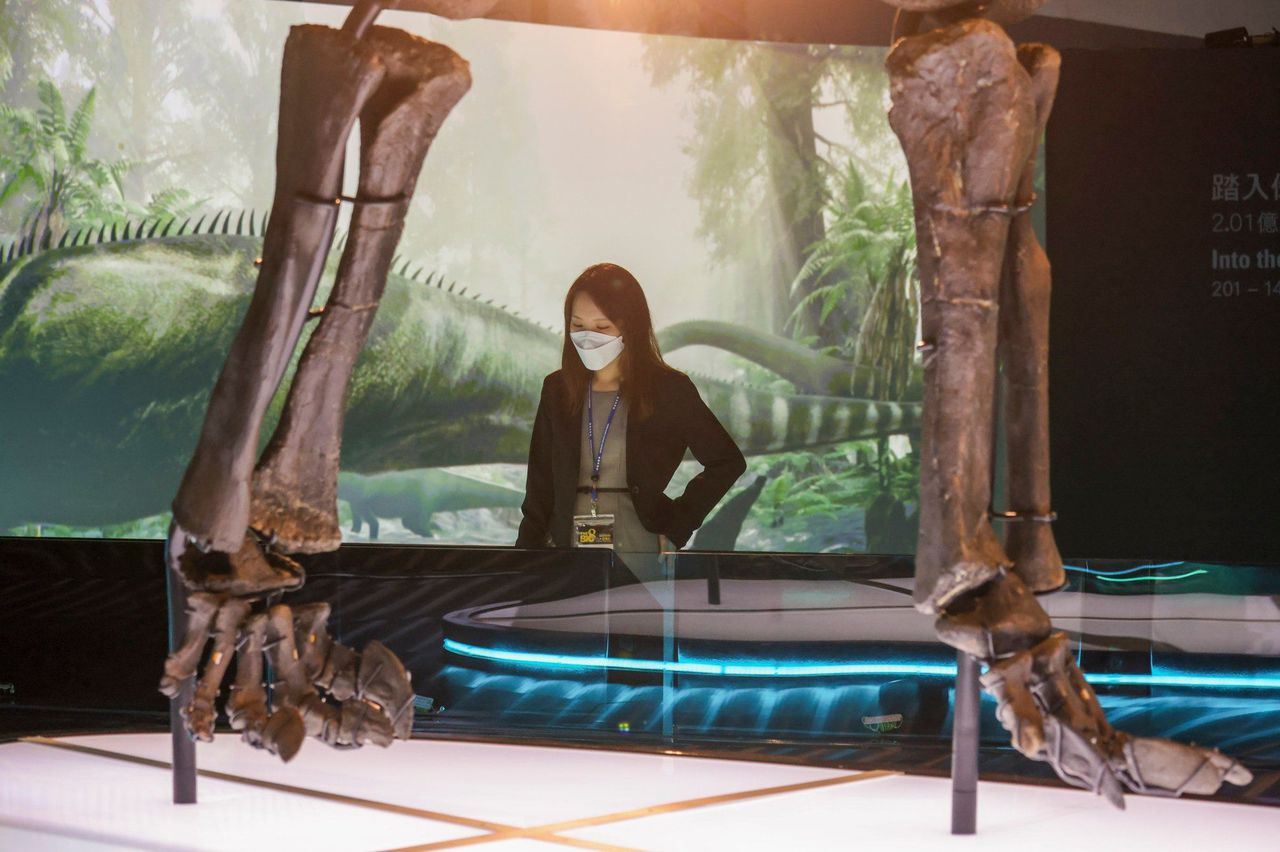 The exhibition features some of the most complete fossil skeletons from the dinosaur kingdom.

4. How do people book tickets for the exhibition?

Admission to the exhibition is free but visitors have to make reservations up to seven days in advance through an online booking system.

The system, which was launched on Wednesday, will update daily at midnight except on Thursdays to allow visitors to book newly released time slots.

Each visitor can make a reservation for up to four people. The email address for registration can be used to book a time slot on the same date. Successful applicants will receive a confirmation email and a QR code, which they have to present for admission. The QR code can only be used once and cannot be transferred to others.

Visitors must also scan the “Leave Home Safe” venue QR code with their mobile devices before entering the museum and fulfil the relevant vaccine pass requirements. 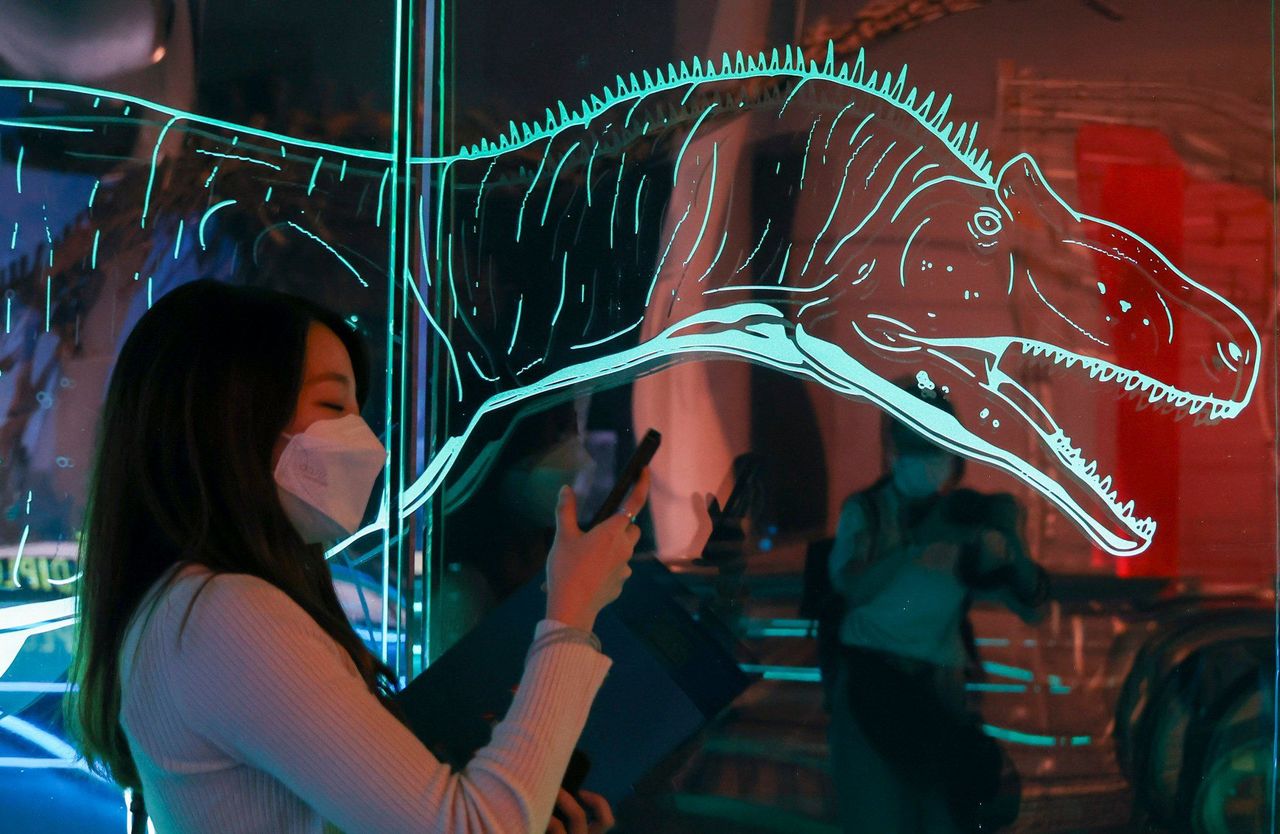 Admission to the exhibition is free but visitors have to make reservations online ahead of time.

5. Did Hong Kong have other dinosaur fossils exhibitions?

Previous dinosaur exhibits at the Science Museum only featured smaller body parts such as bone fragments and teeth.

Lung Tak-chun, who holds workshops on palaeontology and also runs Dinosaur@Fossil Lab, a shop selling small fossils, said the exhibition was “worth visiting” after seeing it on Friday.

“The Science Museum did have another exhibition about dinosaurs in 2013, but most of the exhibits were reconstructed. It is very rare that so many original skeletons can be displayed this time,” he said.

“We really have to treasure this exhibition, because we can observe these precious exhibits at a very close distance.” 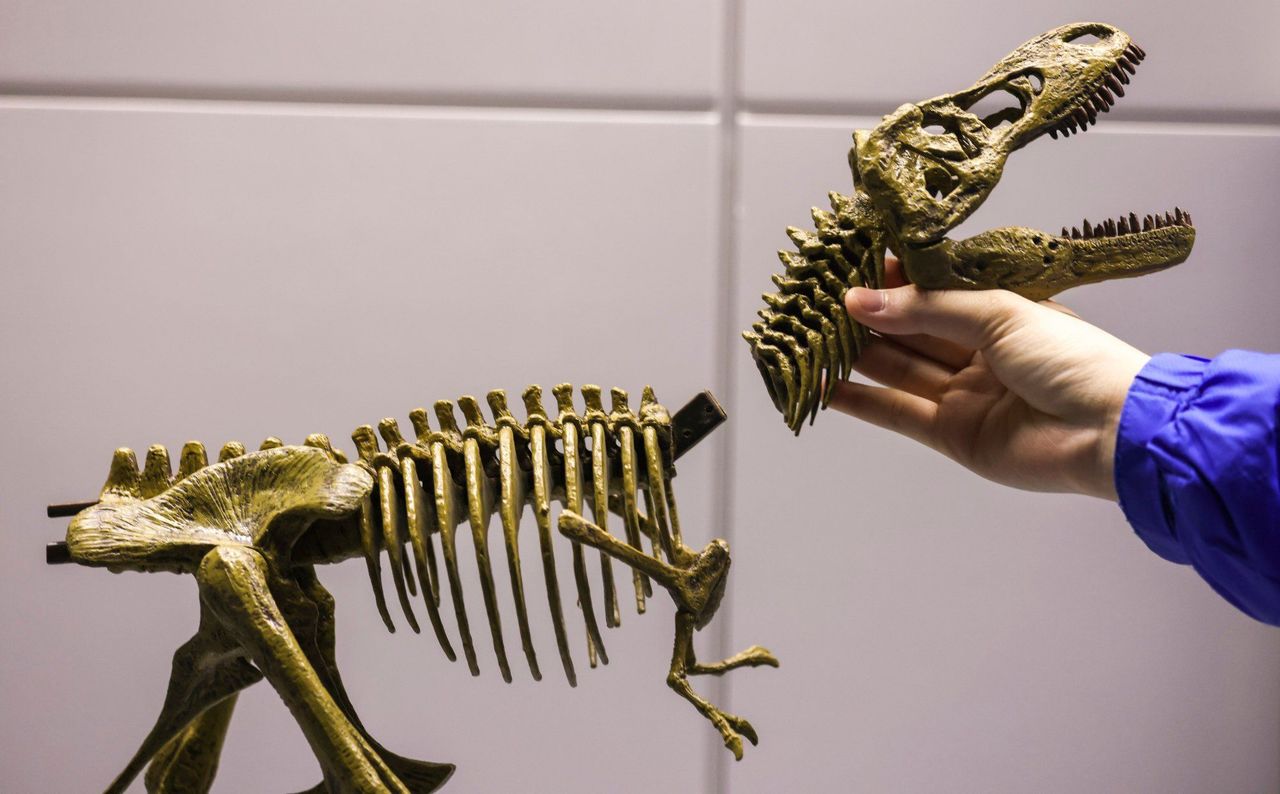 The Science Museum will organise dinosaur-themed events including yoga classes and lectures.

6. Are there other events about dinosaurs?

During the exhibition period, the Science Museum will organise a series of events related to dinosaurs, including specially themed yoga classes and lectures by paleontologists.

Science classes for children will also be held. Youngsters can learn about genetics, such as cells, chromosomes, DNA and genes, and get the chance to build their own fossil models.

The museum will also host a sleepover programme allowing participants to spend a night with the fossils and join a treasure hunt at the dinosaur exhibition hall. There are six sleepover sessions available, with each limited to 30 families.

The programme is suitable for children aged nine to 12, who must be accompanied by a parent for the session. Online registration opened on Friday and will end on July 17. Fees for each session are HK$312 per child, but parents will not have to pay extra.

The Leisure and Cultural Services Department will also launch other activities at different venues – a dome show “Dinosaurs of Antarctica 3D” will be screened at the Space Theatre of the Space Museum, while the Central Library will organise dinosaur-themed storytelling workshops.