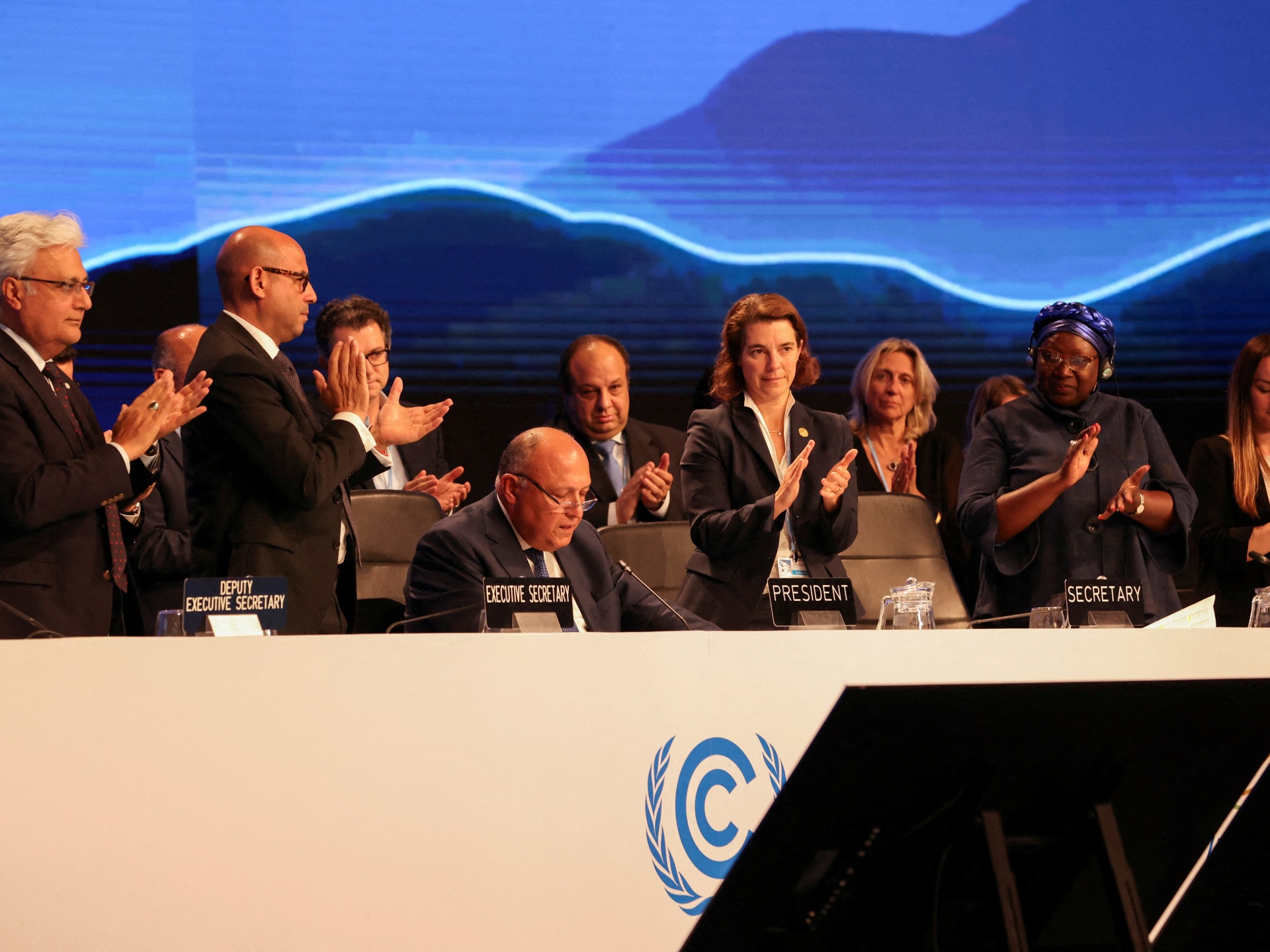 What are people saying about the COP27 deal?

Countries have adopted a fund to help poor countries affected by disasters, but no efforts made to tackle emissions.

Countries have adopted a hard-fought final agreement at the COP27 climate summit that sets up a fund to help poor countries being battered by climate disasters – but it does not boost efforts to tackle the emissions causing them.

Here is what people are saying about Sunday’s deal:

“This is the make-or-break decade, but what we have in front of us is not enough of a step forward for people and planet.

“I urge you to acknowledge when you walk out of this room that we have all fallen short in actions to avoid and minimise loss and damage. We should have done much more, our citizens expect us to lead.”

“Too many parties are not ready to make more progress today in the fight against the climate crisis.”

“It is mind-boggling that countries did not muster the courage to call for phasing down fossil fuels, which are the biggest driver of climate change.”

“A fund for loss and damage is essential – but it’s not an answer if the climate crisis washes a small island state off the map, or turns an entire African country to desert. The world still needs a giant leap on climate ambition.

“To have any hope of keeping to 1.5 degrees Celsius, we need to massively invest in renewables and end our addiction to fossil fuels. We must avoid an energy scramble in which developing countries finish last – as they did in the race for COVID-19 vaccines. Doubling down on fossil fuels is double trouble.”

“It is illogical to fund the irreversible consequences of climate change without significant investment in the adaptation and mitigation measures that developing countries need to address the underlying causes.”

“We have struggled for 30 years on this path and today in Sharm el-Sheikh this journey has achieved its first positive milestone … It is a down payment and investment in climate justice.”

Germany expressed both “hope and frustration” over the outcome of a fraught UN COP27 climate summit that wrapped up on Sunday.

“We have made a breakthrough on climate justice – with a broad coalition of states after years of stagnation,” Foreign Minister Annalena Baerbock tweeted. But a lack of ambition on reducing emissions means “the world is losing precious time on the path to 1.5 degrees”, she said.

“It is more than frustrating to see overdue steps on mitigation and the phase-out of fossil energies being stonewalled by a number of large emitters and oil producers.”

“No progress” was made on making additional efforts to reduce greenhouse gas emissions and abandoning fossil fuels, Pannier-Runacher said, regretting a “real disappointment” but welcoming a loss and damage fund for nations vulnerable to climate change.

“Nevertheless, the commitments made in Glasgow were reiterated, in particular on the need to keep aiming for 1.5°C. That was a red line for us. It was important to reaffirm 1.5°C in this context of an energy crisis that could let some believe that we would give up on that goal to face the crisis. That is not the case. We reaffirmed that goal, and now we move forward.”

“My friends, we heard the call and we responded. Today here in Sharm el-Sheikh we established the first-ever dedicated fund for loss and damage, a fund that has been so long in the making.

“Millions around the globe can now sense some glimmer of hope that their suffering will finally be addressed appropriately.”

“We are just a metre above sea level. Every fraction of degree in increase in temperature and every millimetre of sea level rise threatens our existence.”

“We made it clear over the past two weeks that mitigation ambition [cutting emissions] was a cornerstone of our outcomes here at COP27. I am disheartened we did not get there.”

“We’ve made historic progress at COP27 to establish new funding arrangements, including a fund, and to explore a broad range of ways to provide support to developing countries that are particularly vulnerable to the adverse effects of climate change.

“However, we must strive further in light of the stark findings of the latest science.”

“Each of us will have to explain that to our citizens, to the world’s most vulnerable countries and communities, and ultimately to the children and grandchildren to whom many of us now go home.”