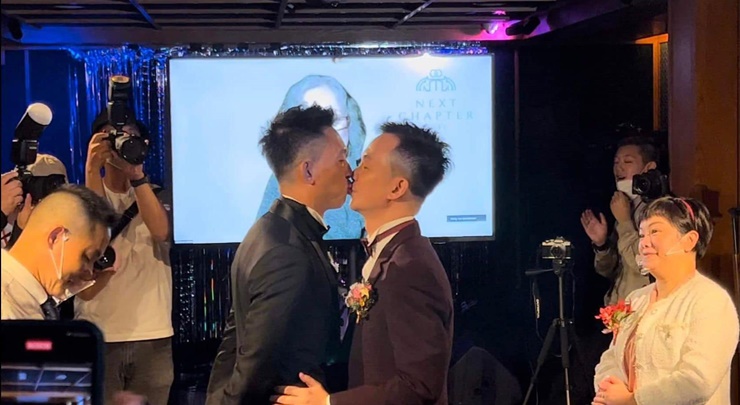 Hong Kong's first openly gay lawmaker “Slow Beat” Raymond Chan Chi-chuen has wedded his boyfriend, with his marriage witnessed by a civil celebrant in United States via video.
Chan came out in 2012 when he was elected as a legislator. He resigned as a lawmaker in 2020, when authorities announced to postpone Legislative Council election by a year.

He is one of the 47 defendants from the pro-democracy who are charged with subversion in connection to the primary election last year.

The People Power former lawmaker was released on bail in September after he was remanded for half a year.

As he is banned from traveling abroad, he could not head to Utah in United States for same-sex marriage. He organized the wedding in Hong Kong this Tuesday, and an application for marriage has been filed to the US. A document will be ready in a month.

Hong Kong does not allow same-sex marriages nor civil unions. There are currently no laws against discrimination on the grounds of sexual orientation in the city.

In 2019, a gay civil servant won at the city's highest court, which ruled that he and his husband should enjoy spousal benefits and joint tax assessment.

In October this year, a gay activist has withdrawn a judicial review after the government promises to treat same-sex couples equally in funeral arrangements for their partners.
#Facebook
Add Comment