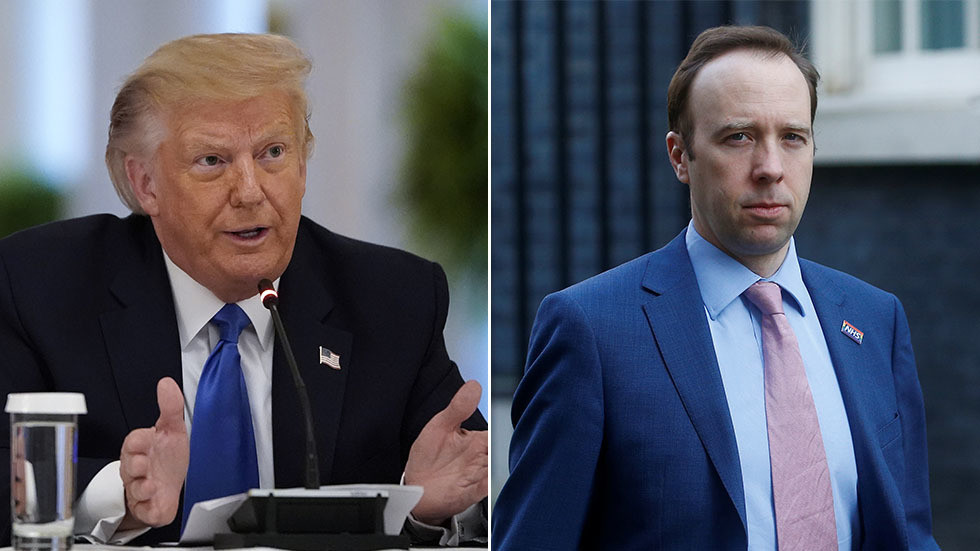 UK Health Secretary Matt Hancock has refused to back US President Donald Trump's claim that he played a pivotal role in pushing Britain to ban Huawei from its 5G network. The step was taken after advice from UK experts, he said.
When commenting on the UK's move against the Chinese telecoms giant, Trump claimed that his administration, and he personally, had “convinced many countries” not to use Huawei equipment.

Hancock, however, refused to give any credit to the US leader. Asked about the remark by Sky News’ Kay Burley, he replied, “Well, we all know Donald Trump, don't we?”

After being asked to clarify, Hancock insisted that the government relied only on “technical advice” from its own experts.

On Tuesday, Digital Secretary Oliver Dowden unveiled a plan to ban British mobile operators from buying Huawei 5G equipment after December 31. The companies must also get rid of all of their existing Huawei 5G kits by 2027. Dowden argued that close ties with the Chinese telecoms giant expose Britain to security risks.

Philip Jansen, the CEO of telecoms company BT, warned that a rushed decision to cut ties with Huawei and remove its gear could potentially hurt millions of British mobile customers and even result in “outages.”

The Trump administration blacklisted Huawei last year, citing the threat of Beijing using Huawei for surveillance and espionage. Trump and other senior US officials have repeatedly pressured their allies in Europe, including the UK and Germany, to take action against Huawei.

Both Huawei and China have denied all allegations of using the company's capabilities for spying. A spokesperson for Huawei blasted the ban, arguing that purging its gear out of UK's 5G network will only slow down the nation's digital development and increase bills for British consumers.
#Donald Trump
Add Comment