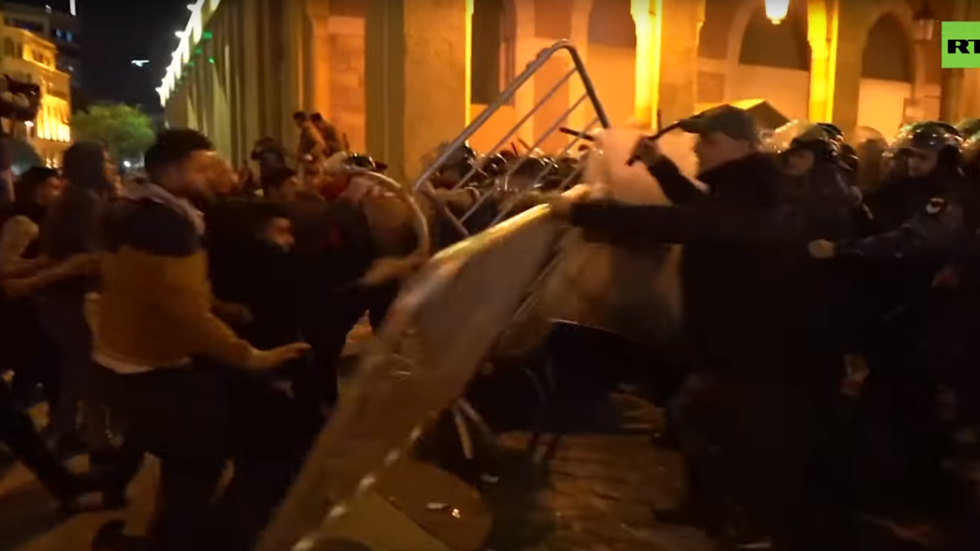 Dozens of people were injured and hospitalized in Beirut during street battles between thousands of anti-government protesters and armed police amid a worsening political and economic crisis in Lebanon.

Protesters hurled debris, bottles and fireworks while police used tear gas, rubber bullets and water cannon to disperse the crowds on a second night of unrest in the capital this past weekend.

Another view of the advance by protesters on Amal Movement supporters, who have repeatedly attacked peaceful demonstrators.#LebanonProtests #لبنان_يتنفض pic.twitter.com/r70ZiErGrG

Authorities said that over 40 people were hospitalized following the clashes and more than 100 others were treated for their injuries by the Civil Defense and the Red Cross.

Dozens more were injured during clashes on Saturday as riot police faced off against thousands of demonstrators across Beirut, amid unrest fueled by frustration at governmental failures, inaction and punitive proposed remedies, such as taxing WhatsApp calls.

Running battles tonight between protestors + police in Downtown #Beirut. I witnessed two armed individuals in civilian clothing appear from behind police lines and set fire to protest tents. According to @ALJADEEDNEWS, they were members of the Parliament Guard.#LebanonProtests pic.twitter.com/Zj6R2zOYwS

Give it up to this Lebanese protester, a Premier League club should sign him pic.twitter.com/jvkSNmiQyS

The army was eventually deployed to conclusively end the street clashes between protesters and police.

An investigation has already been launched into the heavy-handed tactics used against demonstrators on Saturday with Interior Minister Raya al-Hassan calling for a “rapid and transparent” investigation.

Sunday’s clashes took place on the eve of a meeting between the president and ministers to try and form a new government, which has been postponed until Thursday.

Lebanon’s former PM Fouad Siniora kicked out of a concert at @AUB_Lebanon after attendees started chanting at him to leave #LebanonProtests pic.twitter.com/PDaIzDlXwf

Talks to assemble a new government are stalling, following the resignation of Prime Minister Saad al-Hariri in October. Hariri is widely expected to regain the post but protesters have forcefully refused to accept his reinstatement.