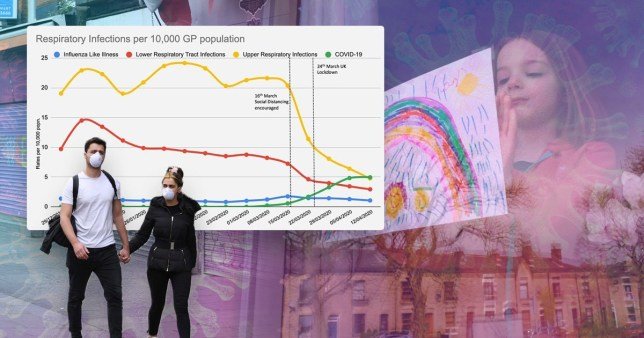 Was lockdown a waste of time? Study finds stay-at-home order was 'ineffective'

Blanket lockdown orders had limited effect on fighting coronavirus in Europe, a bombshell experimental study has suggested.
But closing schools and banning mass gathering did slow the pandemic’s spread across the continent, researchers from the University of East Anglia (UEA) found.

They said that relaxing stay-at-home orders and allowing some types of non-essential businesses such as shops to reopen could be the starting point towards moving the UK out of lockdown. The success of these measures, along with other social distancing policies across 30 European countries, were studied by the UAE scientists, who wanted to see which were the most effective at controlling the disease.

They cautioned that the study, which was funded by the National Institute for Health Research Health Protection Research Unit in Emergency Preparedness and Response at King’s College London and Public Health England, is experimental.

Banning mass gatherings, along with closing schools and some non-essential businesses, particularly in the hospitality sector, were the most effective ways at stopping the spread of Covid-19, they found.

They said that more investigation is needed on the use of face coverings in public, as the current results, which do not necessarily support their widespread use in the community, were ‘too preliminary’.

Dr Julii Brainard, of UEA’s Norwich Medical School, said the researchers were ‘really surprised’ to learn that stay-at-home orders may not be needed to control the outbreak, provided that this did not lead to more mass gatherings.

It was found that these stay-home policies were not linked with a decline in incidences, and that as the number of lock-down days increased, so did the number of cases.

The researchers looked at the number of cases and deaths taken from daily published figures by the European Centre for Disease Control.

These were compared with the start dates of different measures including the restriction of mass gatherings, the closure of schools and different types of businesses, stay-at-home orders and the wearing of face masks.

Lead researcher Professor Paul Hunter, from UEA’s Norwich Medical School, said the study shows that school closures in Europe had ‘the greatest association with a subsequent reduction in the spread of the disease’, but it does not clarify the ongoing puzzle of whether children can pass Covid-19 to adults.

He said: ‘And it does not identify which level of school closure has the most impact, whether it is primary, junior, senior school or even higher education.

‘It’s also important to remember that our results are based on total closure, so it is possible that partial school closures could have worthwhile impacts on the spread of infection.’

Banning public and private mass gatherings was another key tool in fighting the spread of the virus.

Professor Hunter noted that the size of the current banned mass gatherings varied between countries and so the importance and impact of the scale of the individual event is still unclear.

Differences in how the countries carried out these policies have ranged from them being an advisory notice in some places, while elsewhere they were orders which were enforced by police with penalties.

The shut-down of non-essential businesses, which included places where people gathered such pubs, leisure centres, restaurants and venues, also had an impact on the spread of infection in each country.

Professor Hunter said: ‘This suggests that keeping some businesses closed, particularly in the hospitality and leisure sector, would have the most impact.

‘However, we also know that while outbreaks of food poisoning are frequently linked with restaurants, outbreaks of other respiratory infections generally in the hospitality sector are fairly rare.’

Dr Joshua Moon, of the University of Sussex Business School, noted that differences in testing rates and strategies in each country would have an impact on the number of cases.

He said the study may indicate that stay-at-home orders could be the first things to be relaxed.

Dr Moon said: ‘We have to remember that decisions like this cannot and should not be made on a single finding.

‘Nor should policy be made based solely upon science – there are many social, economic, political, and moral factors to consider that science simply cannot answer.

‘When it comes to this pandemic, caution is paramount, otherwise we could tip too far and risk a second wave and a return to lockdown.’

Researchers from the University of Newcastle, the London School of Hygiene and Tropical Medicine and Tshwane University of Technology in South Africa were also part of the study team.
Add Comment