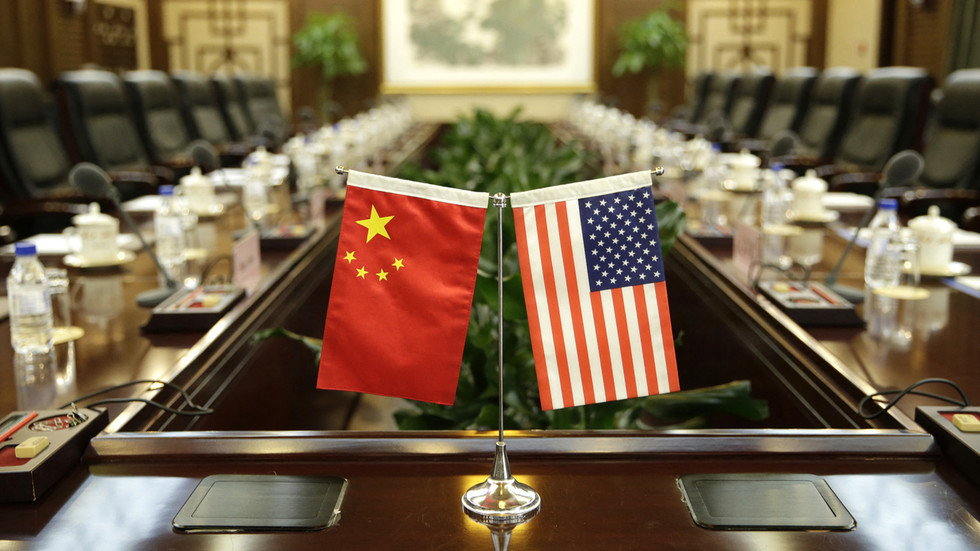 War or uneasy peace? What 2022 heralds for US-China relations

Will the new superpower rivalry that dominated the headlines in 2021 ease next year, or are global tensions likely to ratchet up even more?
As 2021 comes to a close and Joe Biden edges towards one year in office, there's one thing clear already: contrary to hopes and wishes, there’s been no reversal in the confrontational foreign policy the Trump administration set towards China, even if it has been less erratic in its presentation.

The new president embraced this legacy, even as he sought moderate diplomacy with Beijing in the form of a summit with Xi Jinping, then proceeded to frontload new sanctions afterwards. The year ends with the US blacklisting scores more Chinese companies, banning all goods from Xinjiang, declaring a diplomatic boycott of the Winter Olympics (although this doesn't amount to much in practice), and setting up the AUKUS military framework aimed squarely at Beijing.

The current fraying of relations may not constitute a crisis, but it has consolidated into a Cold War-style confrontation and has become a new normal for the world. China has responded to this new environment by forcing through a number of social and economic upheavals, from big tech, to real-estate, to “common prosperity,” and more.

Will things get more uncertain in 2022, or will they hot up? Some think the latter. Ma Xiaoguang, representing China's Taiwan Affairs Office, stated in a press conference this week: “Next year, the Taiwan Strait situation will become more complex and severe.” He also vowed “drastic measures” should “Taiwan independence forces cross red lines.”

This statement undoubtedly sets the tone for what to expect in 2022. Relations between the US and China are highly unlikely to stage any sort of recovery, and if anything, high tensions will persist over flashpoint issues such as Taiwan.

What are the events we need to keep a close eye on? First of all, following the Winter Olympics, there is one big political event which will ultimately define the scope of the upcoming year: the 20th Congress of the Communist Party, which will take place in the latter half of 2022.

This is significant because it is inevitable that Xi Jinping will seek a third term as leader, a development unprecedented in Chinese politics since Mao Zedong. In order to pave the way for this, Xi will be looking to more deeply consolidate his own legitimacy and power base with the party and country.

While on one hand this consideration makes it highly unlikely that he will intentionally exacerbate a crisis, not least a war, on the other hand it also means he will double down on his own political agenda and goals, such as his own ideological vision. The regulatory realignment of China's business environment will continue, and he will double down on his positions regarding Hong Kong and Taiwan, as successes on these matters represent important sources of legitimacy in fulfilling his vision of "the great rejuvenation of the Chinese nation."

This will not be of a military nature, but it will involve the intensification of things such as the new “separatist blacklist,” the strong-arming of companies to follow its position on the matter, and seeking to pull away more of Taiwan's remaining allies. As Wang Yi affirmed, reunification is the only acceptable outcome for Beijing.

But in this climate of political sensitivity and high stakes will come opposition. The United States will continue its militarization of China's surrounding regions, but at home the Biden presidency also faces a political moment of high importance: the midterm elections. Although the president is boasting about the economy right now, that is simply the US rebounding after having hit the bottom from Covid a year earlier; he is simply taking credit for it logically coming back up. In any case, other problems loom. After almost a year in office, Biden is increasingly unpopular and his approval ratings are at historic lows. The US economy is set to slow down, all while inflation continues to skyrocket to 40-year highs.

The most disturbing potential scenario in all this? A disliked president goes into the midterms desperate to avoid a whitewash, and facing a Republican Party who will accuse him of being soft on China and oppose his lavish spending initiatives.

It is difficult to see any outcome at present which doesn't involve the president losing both houses of Congress and becoming a lame duck, the fear of which will lead to a high stakes campaign. Biden will be tempted to play the China card ever harder, making it (as usual) the scapegoat for US failures at home, both before and after the elections.

Whatever the result, it doesn't set the stage for re-engagement and rapprochement. Biden will have even less limited political space to make any kind of deal with Beijing, to remove tariffs or to take positive actions, all of which would be seen as vote-losing measures. Biden has set the parameters of his presidency around being tough on Beijing and putting American jobs first; will he be tempted to double down on that to seek to build a winning electoral coalition?

In this case, mutual antagonism and distrust will grow in the coming year. Neither leader has the political will or interest to make concessions in a way which hits their domestic political standing. It should be noted that Xi's power and radical agenda has only been affirmed because of souring ties with the United States, not in spite of them.

In this case, 2022 will be spent by both parties attempting to consolidate their positions. The US will seek to try and strongarm other countries to follow its will on China more. Beijing will continue to press home its economic advantages and build influence around the world.

Several other elections will take place which will also influence the course of the US-China competition.

An early swing state will be the March presidential election in South Korea, where a status quo “We don't need to choose between them” legacy candidate, Lee Jae Myeong, goes up against a pro-US and anti-China politician, Yoon Seok Yeol.

In April there’s the presidential election in France, a country which has been more maverick and de-facto competitive against the US following the AUKUS scandal.

Then, finally, Australia goes to the polls in May in a test for premier Scott Morrison, which currently looks grim for him as his support sinks. An incoming Labor government would keep the country pro-US, but it would end the anti-China fanaticism espoused by Morrison and give Beijing cover to end its disputes with Canberra.

So, hoping for a better year? Don't bet on it. It might not be a disastrous one, it might not be apocalyptic, but 2022 will be a year of high political stakes with long-term implications. It will be the defining year of both the Xi and Biden eras, and lay the stage for whatever happens next.
#Joe Biden  #Covid
Add Comment