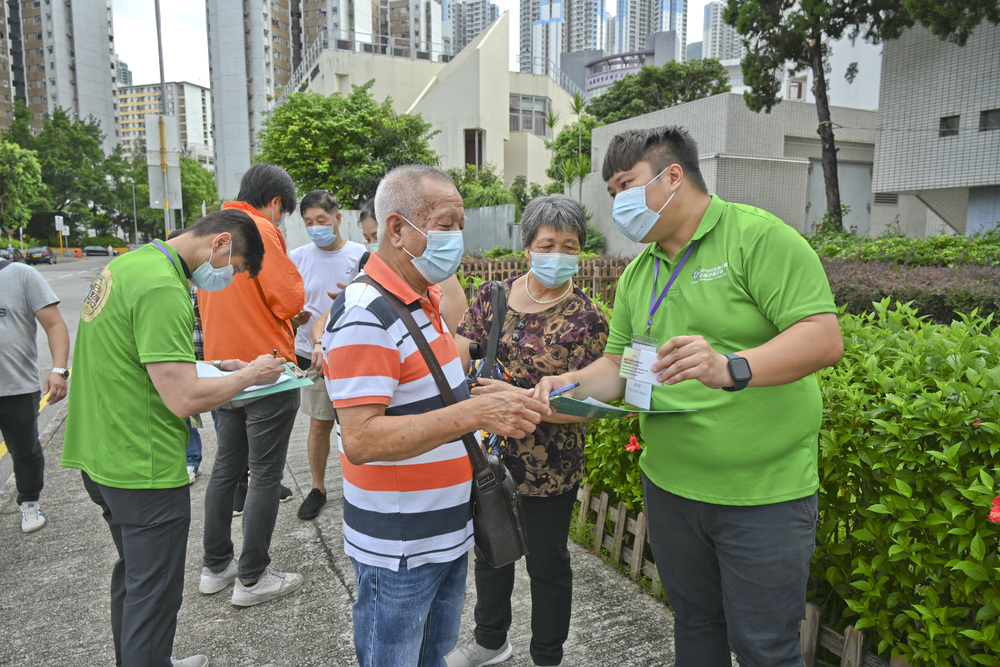 An elderly man queuing up for a walk-in injection at a vaccination center said he was forced to line up amid hot weather conditions yesterday as his daughter had canceled his inoculation booking at a private clinic out of concern about Sinovac side-effects.
The explanation for his delay in getting vaccinated came on the first day when 24 vaccination centers - 19 offering the German-made BioNTech/Fosun and five offering the Beijing-made Sinovac jabs - started distributing "same-day tickets" to people aged 70 or above to get vaccinated without an appointment. Of the 4,600 walk-in tickets available daily, 1,500 were given out.

A dozen elderly were already lined up outside a vaccination center for CoronaVac doses at Kwun Chung Sports Centre in Jordan at 7.45am, 15 minutes before the tickets were to be distributed.

First in line was a man who arrived before 7am, who said he did not know how to book online and did not want to trouble his children. "I want to travel once borders are reopened vaccination will be a prerequisite to travel," he said.

As for the elder whose daughter canceled, his attempts to rebook were rebuffed. "The clinic said I must provide a doctor's certificate to prove I'm fit for the jab, so I was left with no other choice [but to line up]," he said.

One woman accompanied her mother, who is in her 70s, to the center and said they only had to wait 15 minutes.

She praised the center for its good triage arrangements to segregate those with bookings and those with walk-in tickets.

Medical Conscience chairman David Lam Tzit-yuen, who is in charge of the Queen Elizabeth Stadium vaccination center, said several seniors and their relatives lined up for tickets.

"The walk-in service can boost inoculation rates for the elderly, as most of them are unfamiliar with computers and cannot make bookings without assistance," he said.

The walk-in arrangement aims to boost vaccinations among the elderly, who are the most vulnerable.

As of Sunday, only 470,000 of two million residents aged 60 or over had received at least one shot.

The first day for walk-ins came as Hong Kong recorded two imported cases from Tanzania and the United States, taking the city's tally to 11,983, with 212 deaths.

The US case involved a 46-year-old man who had completed both doses of BioNTech in April and tested positive for antibodies last month before flying out.
#BioNTech
Add Comment