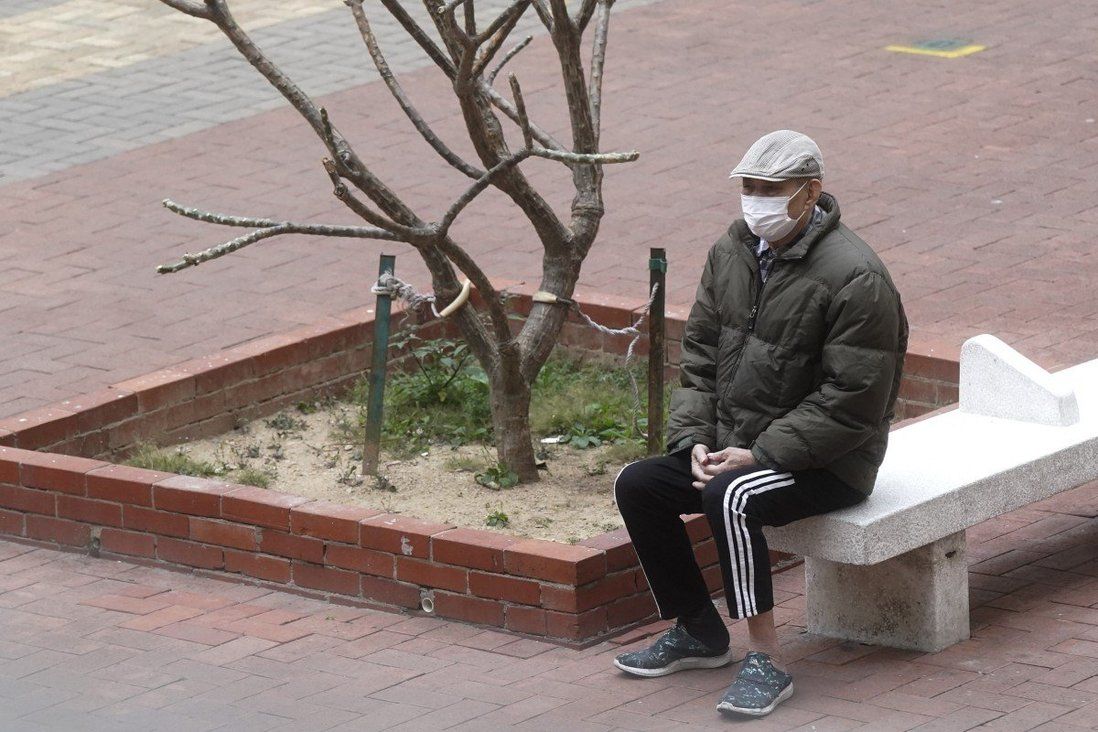 Ivan Lin, with the Society for Community Organisation, accuses government of failing to provide adequate support for vulnerable group.

Covid-stricken and isolated in her Hong Kong home for a fortnight, 72-year old Lau was kept awake on many nights by severe headaches, a sore throat and constant feelings of helplessness.

“I cried. I feared every day that if anything happened to me, no one would even know,” she said.

The former dim sum seller, who asked to be identified only by her surname, has been living in a public housing flat in Kowloon City alone ever since her son moved out eight years ago. She has been separated from her estranged husband for decades.

Hong Kong has more than 152,000 elderly residents aged 65 and above like Lau, who live alone. Lacking family support and community networks, they are among the city’s most vulnerable residents.

The coronavirus pandemic has made life even more challenging for them, especially amid the current fifth wave of infections. Many have been left to face the contagion alone, with overflowing hospitals and quarantine facilities not immediately accessible to them. 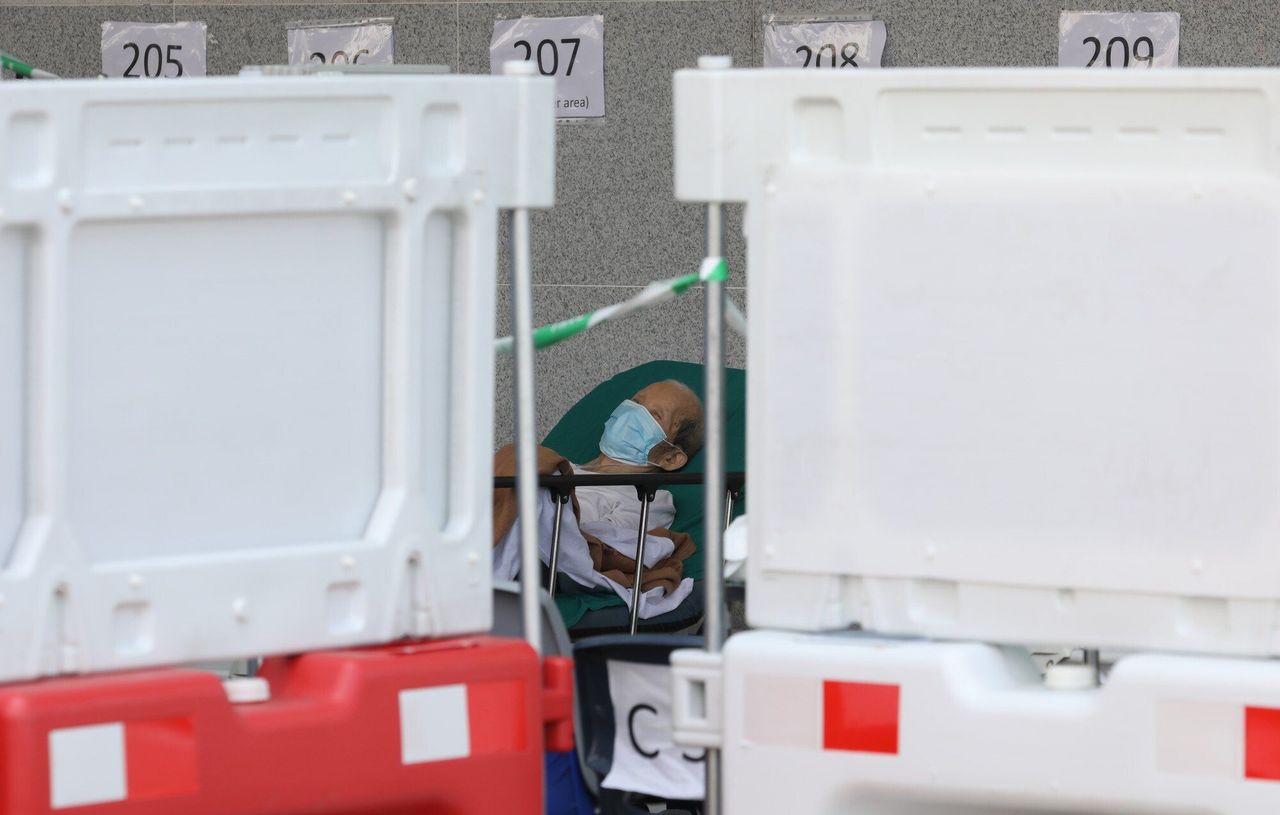 An elderly patient waits outside the accident and emergency department of Princess Margaret Hospital.

Social workers estimate more than 100,000 elderly residents living alone or with only their spouse have been infected during the latest surge.

Lau tested positive for the coronavirus using a rapid screening kit at home on February 22. Although she went to a community vaccination centre to get inoculated in January, she said staff turned her away because she had stopped taking aspirin for heart disease.

After her numerous calls to hospitals went unanswered, she contacted her doctor who prescribed her a few doses of traditional Chinese medicine. But with no one to turn to for help, she had no choice but to risk going out to get the medication.

For the next five days, she self-isolated at home, forced to eat only porridge as she was running out of food.

On nights the sickness and fear overwhelmed her, Lau would text either her son, a social worker, or a doctor for comfort. But her son, his wife and Lau’s two-year-old grandson were also infected and quarantining at home.

“I was all alone by myself. I felt so sick, but no one came to help,” she said. “It was miserable and heartbreaking.”

Lau called an ambulance on February 28 after she ran out of medication while still suffering from headaches and a painful sore throat. She was taken to Queen Elizabeth Hospital.

She sat in the basement of the building that night among many patients waiting to be admitted. There was no water or medical staff available to help. The pain in her rigid legs became so unbearable she finally gave up waiting and returned home.

After another two days isolated at home, Lau called a 24-hour emergency hotline, known as the care-on-call service, on March 3 and was sent to hospital again. This time she was given an intravenous infusion. She was prescribed medication for her cough and asked to go home after about five hours, despite still testing positive for the virus.

Her test result turned negative on March 6, but the coughing lingered.

Medical experts have said the elderly are particularly vulnerable to the highly transmissible Omicron variant given the low vaccination rate among the group.

But with the city’s medical system overwhelmed by a growing number of Covid-19 patients, many infected residents, including elderly living alone, have been forced to self-quarantine at home. 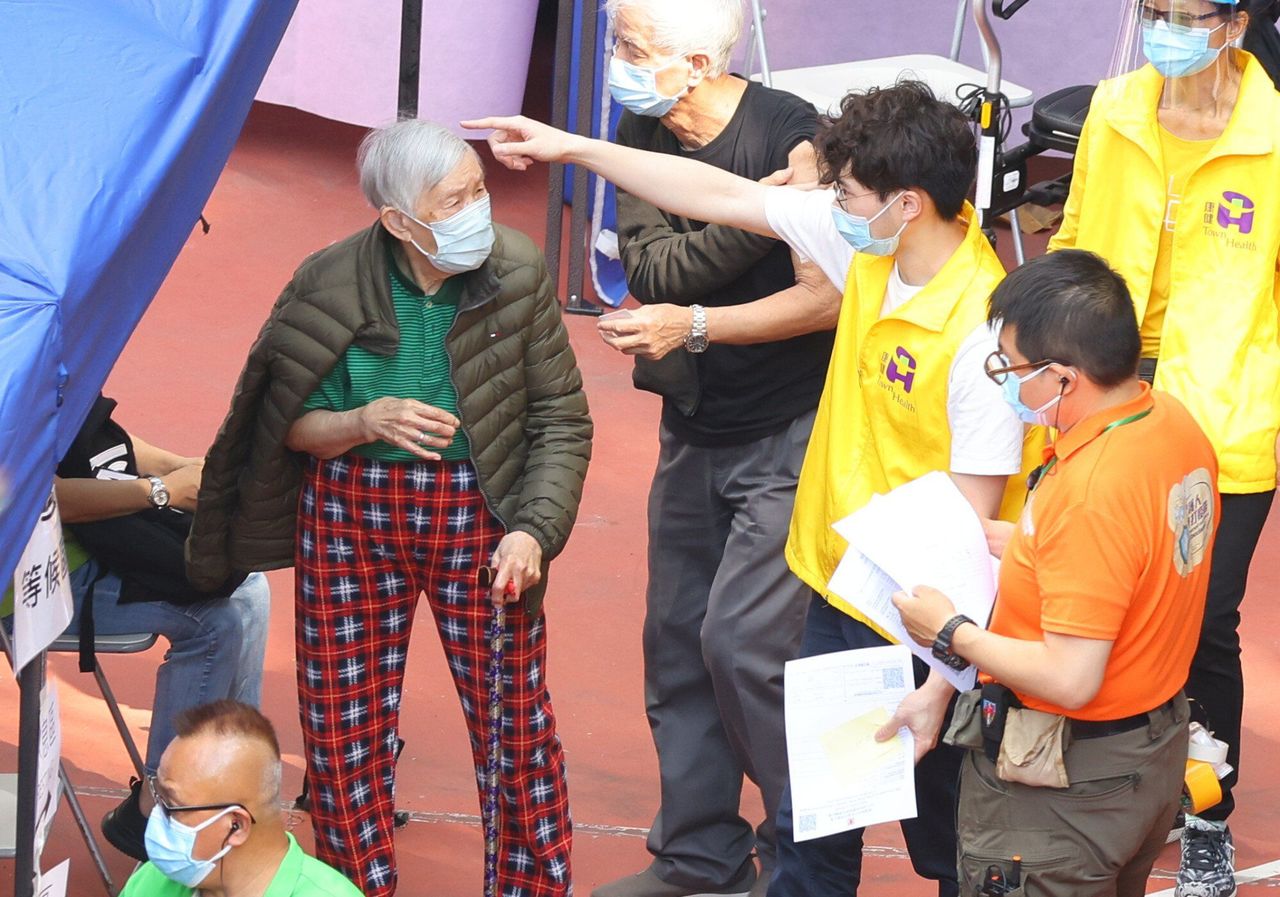 An elderly resident at a mobile vaccination centre in Aberdeen.

Hong Kong Chief Executive Carrie Lam Cheng Yuet-ngor vowed during a press briefing on Thursday that the government would provide support for them.

“Hong Kong has an ageing population. Many elderly residents have been infected by Covid-19,” she said. “We should prioritise elderly Covid patients in all our work.”

The Senior Citizen Home Safety Association, the NGO behind the care-on-call service, told the Post last week that the number of coronavirus-related calls from the elderly had multiplied by about 37 times since January, including calls for help with testing and booking spots at designated clinics, as well as finding the locations of vaccination centres.

The 2016 population by-census found 152,536 elderly residents living alone, accounting for about 13 per cent of the total ageing population of about 1.2 million aged 65 and above. There were also more than 293,000 elderly people who lived with only their spouse.

Situ Jie-zhen, 67, lives with her husband, 70, in a public housing unit in Diamond Hill, while their son and daughter live in mainland China.

The couple, who were fully inoculated with the Chinese-made Sinovac vaccine, tested positive using a rapid screening kit at home on March 2.

Situ, a retired cleaner, said she had acute pain in her bones and throat, and she had coughed and vomited, while her husband ran a high fever.

She said she did not know any hotlines for Covid-19 patients or any government agencies or social services that could help. So she called her social worker, who brought the pair medicine, including antipyretics and coughing syrup, along with masks and canned food. The worker helped them contact hospitals and report their infections to the authorities.

But the food and medicine ran out quickly. They couple ate porridge for days, and sometimes felt so ill that they stayed in bed and skipped meals altogether.

Situ said she had managed to take care of her husband in the past, although she was felled by a stroke a few years ago. The coronavirus infection hit them so hard that they needed help.

“I felt so weak and dizzy that I could not even get out of bed,” she said.

They never received any calls from health authorities while they were self-isolating at home, Situ said.

Situ added that her children were worried about their parents but they could not visit because of cross-border travel restrictions.

The couple had only just moved into their flat a few months ago. They did not know their neighbours.

“No one cared. We also didn’t know how to seek help,” she said. “My husband and I could only cry at home together, waiting to die.”

She finally tested negative on March 7, while her husband’s result turned negative a few days later. They are both now taking Chinese medicine to relieve the coughing.

Ivan Lin Wai-kiu, a community organiser with the Society for Community Organisation, said most of the elderly he worked with lived alone or with only their spouse, and about one-third of them were infected with Covid-19. About 80 elderly residents had caught the virus over the past month alone, he said.

He estimated there were more than 100,000 infected senior residents who were living alone or with only their spouse. He said they needed urgent support.

Lin accused the government of failing to provide sufficient and immediate support to the elderly. Many were poorly informed about the latest measures, including how to use rapid test kits, what to do after testing positive, and how to make bookings at designated hospitals or with transport services.

He said that they were not given supplies such as medicine, rapid test kits, food and hygiene products soon enough when they began self-isolating at home, adding that it took one to two days for the necessities to reach them.

Many who tested positive using self-testing kits but did not know how to report their infection to health authorities were left with no help at all, Lin said.

“Currently most of the support for [elderly residents living alone] only comes from the non-government sector,” he said, urging the government to do more to support the vulnerable group.

The Home Affairs Department last month set up a 24-hour telephone hotline (1833 019) to provide support and assistance to those undergoing home quarantine under the “Stay Home Safe” scheme, with staff answering general inquiries and referring cases to relevant departments for follow-ups.

Lin called on welfare authorities to actively contact isolated seniors who had been infected to learn about their condition and provide them with the latest information. He also urged the government to increase the capacity of designated hospitals as well as private hospitals for treatment.

“They are physically weak, lack social networks, have no family support, and are poor. This group of elderly residents are the most vulnerable and need help,” he said.

Dr Lam Ching-choi, a member of Lam’s de facto cabinet and chairman of the Elderly Commission, said community quarantine centres had prioritised elderly patients who were living alone, and these facilities still had spots for more patients. But he noted that there were many seniors who did not know how to seek help. 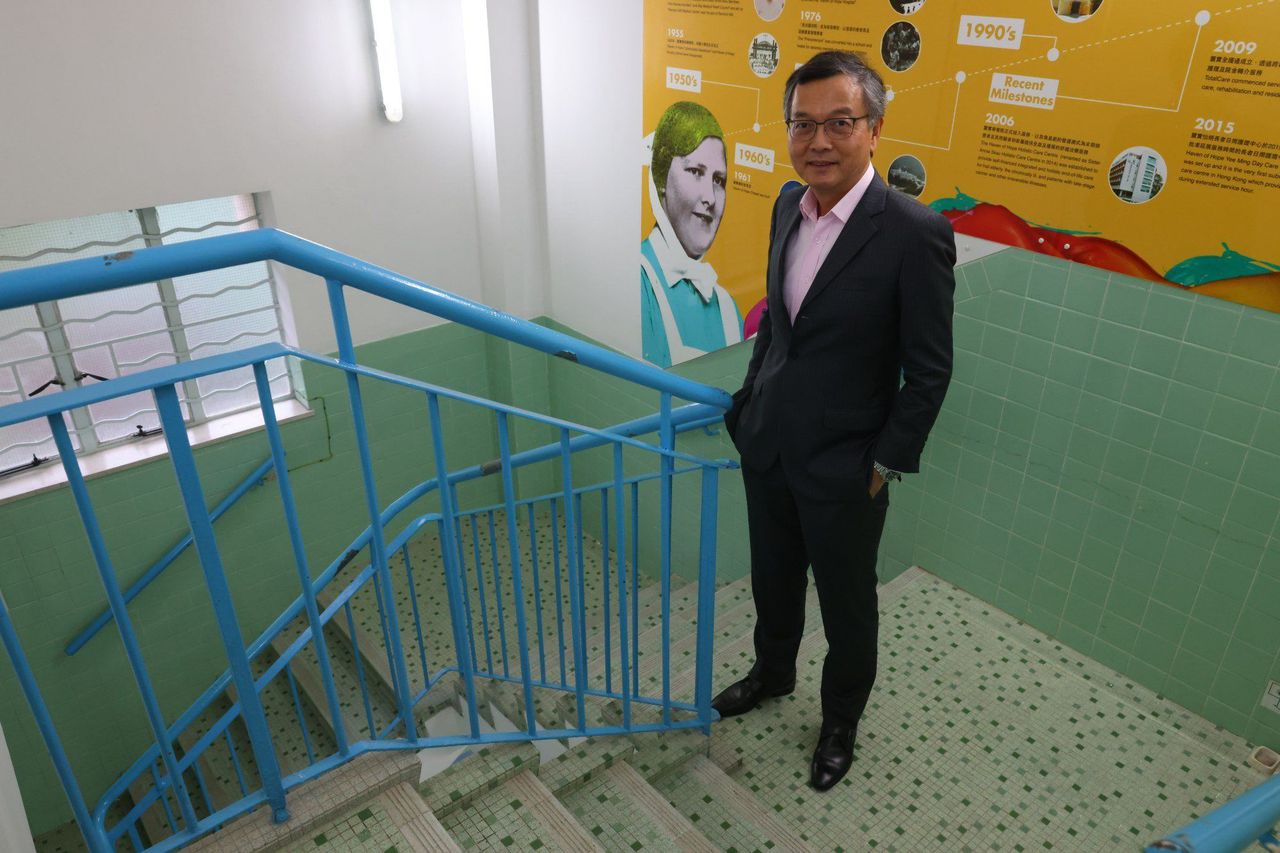 He said he had spoken with different government departments, including the welfare and health authorities on improving support for this vulnerable group, adding that it was crucial to identify elderly patients who lived alone with no family support through the government’s hotlines as well as hospitals, and refer them to social service agencies.

He said the government should provide more resources for these service agencies to enable them to help more elderly residents.

“We have an existing social service network for these elderly residents, but we should reinforce it to serve more in need,” he said.