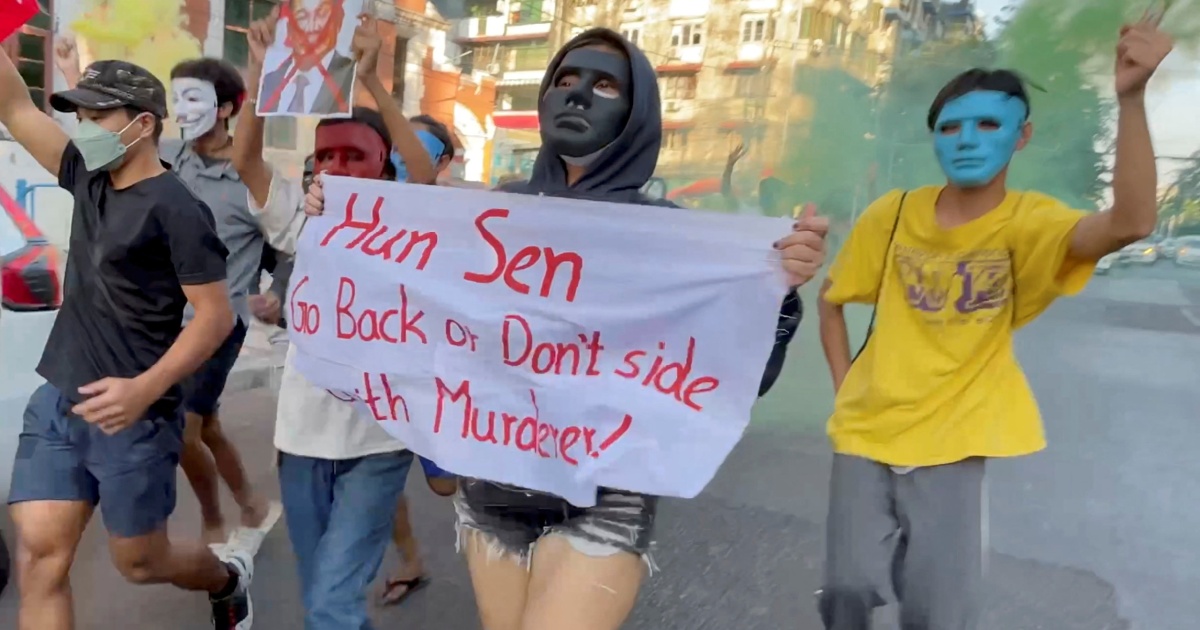 Voices of concern at ASEAN over Hun Sen’s Myanmar visit

Malaysian foreign minister says that as current chair of ASEAN, Hun Sen should have consulted other member states.

Malaysia’s foreign minister has said that some Southeast Asian countries had reservations about last week’s visit to Myanmar by Cambodia’s leader, with concerns the trip could be seen as regional recognition of military rule amid continuing opposition to the coup.

Speaking to reporters late on Thursday, Saifuddin Abdullah said there were different opinions within ASEAN about Hun Sen’s visit, with some of its 10 members concerned the trip could be seen as legitimising the coup-makers.

“There are people who think that he should not have taken the visit because his visit has been construed or interpreted as a recognition of the military in Myanmar,” he said.

“Malaysia is of the opinion that he has the right to visit Myanmar as the head of government of Cambodia. However, we also feel that because he has already assumed the chair of ASEAN, he could have probably consulted the other ASEAN leaders and sought our views as to what he should do if he were to go to Myanmar.”

Asked if he thought Hun Sen’s visit achieved anything, Saifuddin said: “No”.

Myanmar has been in turmoil since the February 1 coup, with the military using force to quell protests and facing armed resistance on multiple fronts from opponents it calls “terrorists”.

Thousands have been arrested and civilian leader Aung San Suu Kyi, who was detained as the generals seized power, has been convicted of crimes including incitement and breaching coronavirus rules.

There have also been reports of the military carrying out air attacks in different parts of the country, forcing thousands of civilians to flee. There were reports on Thursday of more aerial bombings in Chin and Karen states.

Despite the threat of violence, anti-coup demonstrators have also defied the military by holding flash protests in several cities and towns, including the commercial capital, Yangon. Social media posts also showed images of protests in Shwebo township and Yinmabin district, both in the Sagaing region on Thursday.

ASEAN late last year took the unprecedented step of sidelining Min Aung Hlaing from its leaders’ summit over his failure to implement the five-point peace plan to end hostilities and start inclusive dialogue agreed with ASEAN in April.

Saifuddin said it was unclear whether Cambodia, as ASEAN chair, would continue to exclude Myanmar’s military government from ASEAN meetings until it showed progress, a position favoured by the previous chair Brunei, which Malaysia backed.

Meanwhile, the United Nations special envoy urged ASEAN on Thursday to engage all sides in the crisis.

“The special envoy advocated for confidence-building measures involving all stakeholders, in addition to ethnic armed organisations,” the statement said of Heyzer’s discussion with Hun Sen.

An envoy from the previous chair, Brunei, made meeting all stakeholders a precondition for visiting, which the government rejected. But Cambodia’s incoming Myanmar envoy Prak Sokhonn said that approach was not productive.

Heyzer urged Prak Sakhonn to work with her and the international community on “a coordinated strategy towards creating an enabling environment for inclusive dialogue”.

“She emphasised solutions needed to derive from engaging directly with and listening carefully to all those affected,” it said.

Hun Sen did not meet Aung San Suu Kyi while he was in Myanmar and made no mention of her in the joint statement he released with Min Aung Hlaing afterwards.