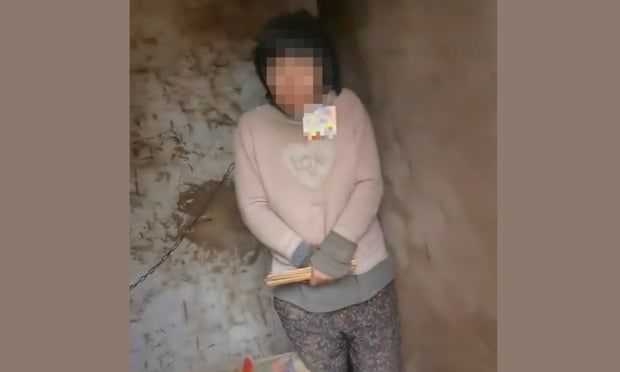 The footage, taken on 26 January, was posted to the video-sharing site Douyin the following day by a man who was shocked to find the woman locked in the rubbish-filled building in a village in Jiangsu province in the east of the country.
Standing in freezing conditions, the woman appeared to be chained by her neck to a concrete wall and she seemed dazed as she struggled to speak coherently.

A video of the man who had apparently locked up the woman was posted later. As a small boy stood next to him, the man said the woman had multiple children with him, some of whom introduced themselves in the video. “Other people looked down on her,” he said, explaining why his family had taken her in.

Local authorities investigating the case in Feng County said the woman had been a beggar and had married the man in 1998.

They said after the birth of the couple’s second child, family planning officials had implemented birth control measures that proved ineffective. Psychiatric experts who examined the woman diagnosed her with schizophrenia, the authorities said.

China’s censors have not attempted to suppress the story or discussion of it. On Weibo, a national microblogging site, a thread discussing the government investigation of the case has been viewed more than 76m times, racking up more than 25,000 comments since Monday.

Officials are also investigating the man, who is not facing criminal charges. Many outraged commenters have accused him of human trafficking but the Feng County government said there was no evidence to support those claims.
Add Comment