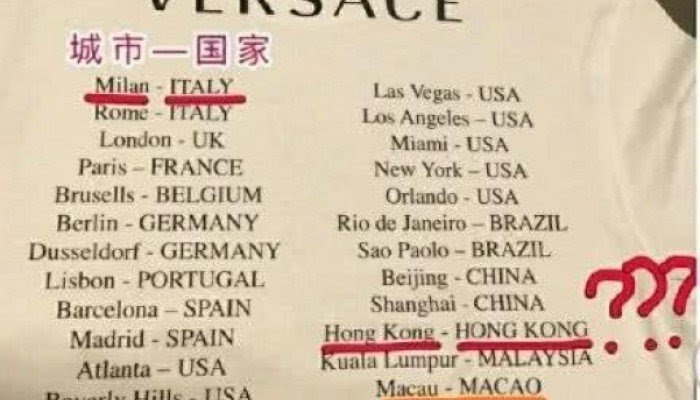 Italian fashion brand Versace apologised to its Chinese customers on Sunday for producing a range of tops that suggested Hong Kong and Macau were separate countries.

In a Chinese-language statement published on the social media network Weibo, Versace said it had made a mistake in the design and would destroy the offending clothing.

However the brand’s ambassador in China, the actress Yang Mi, said she would end her association with Versace because “as a citizen of the People’s Republic of China” she was “extremely outraged” by the design.

Communist Party mouthpiece People’s Daily weighed in on Sunday with an opinion piece saying that “the whole matter shouldn’t be over [with the apology]” because Versace’s mistake was grave and came at a critical time when Beijing was fighting against “Hong Kong independence”.

“In the current context when … those who support Hong Kong independence are creating trouble wilfully … a global brand like Versace has made a problematic T-shirt that calls Hong Kong a country.

Is it really an accident?” the opinion piece read. The T-shirts and hoodies, which had a price tag starting at US$380, featured a list of famous cities and the countries they can be found in, for instance “Milan – ITALY” or “New York – USA”.