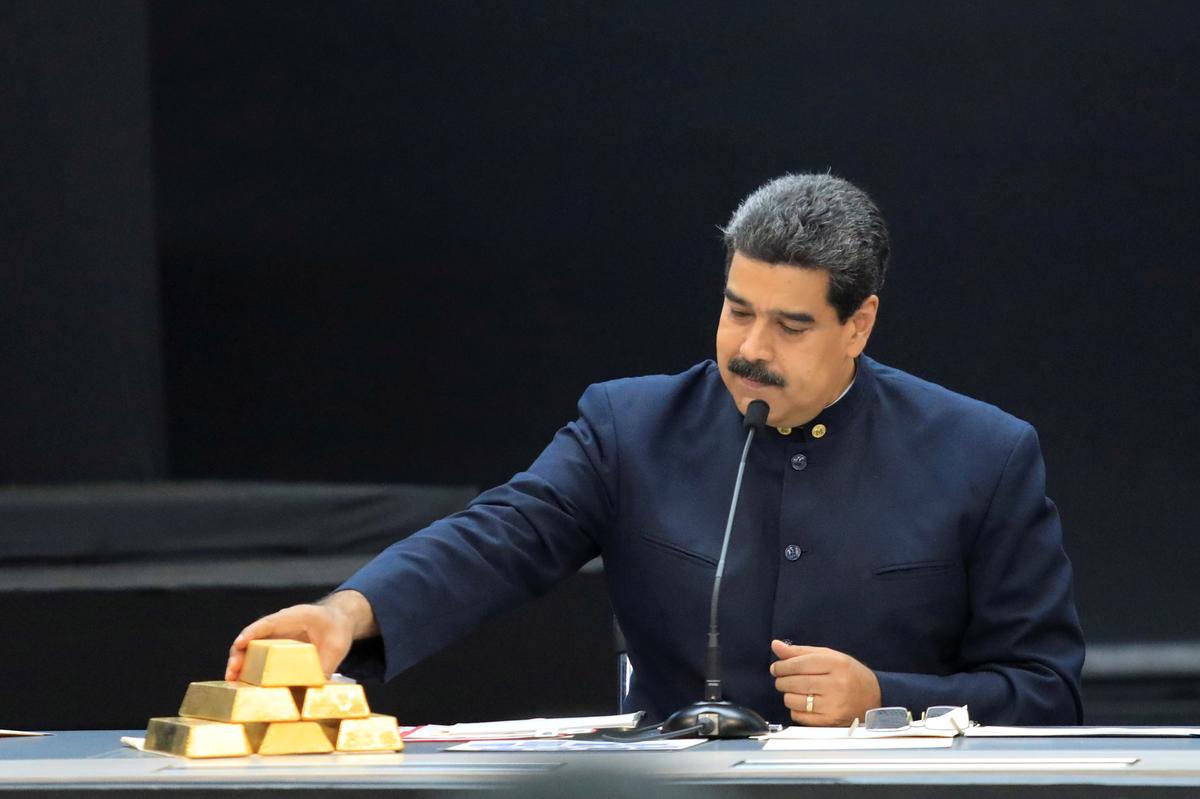 Venezuela's rival leaders, President Nicolás Maduro and his western-backed opponent Juan Guaido, began a legal tug-of-war on Monday over $1 billion of the country's gold stashed deep under the Bank of England in London.
In a High Court hearing due to last four days, the Venezuelan central bank (BCV), controlled by Maduro’s government, is seeking an order to force the Bank of England to release the bullion that, like many countries, it stores there for safe keeping.

Lawyers representing the BCV say selling the gold, which amounts to around 15% of Venezuela’s foreign currency reserves, would fund the response to the coronavirus and bolster a health system gutted by six years of economic crisis.

Guaido’s lawyers meanwhile say the bullion is his to control as the British government, along with around 60 others around the world, recognise him as leader after claims Maduro rigged Venezuela’s last presidential election two years ago.

Monday’s start of the hearing saw the two legal teams lock horns over who is recognised as the legitimate leader.

BCV representative Nick Vineall QC argued a statement by the UK government in February 2019 that Guaido was interim president had been carefully nuanced and that diplomatic action since then had shown that Maduro was still seen as in charge.

He gave examples of how economic sanctions had referred to Maduro and how Maduro’s embassy staff had received correspondence on Queen Elizabeth II’s birthday last June.

Guaido’s designated representative to the UK, Vanessa Neumann, a former London socialite who once dated Rolling Stones singer Mick Jagger, had meanwhile been told that while she would be received in London, she would not receive a diplomatic visa, diplomatic immunity or have access to Venezuela’s diplomatic properties there.

“As far as western Europe is concerned for the most part... there are full diplomatic relations with the Maduro government,” Vineall said.

Andrew Fulton, Guaido’s representative in the London case on Monday responded by saying that the UK’s statement in February 2019 had been clear.

“Those two words ‘now recognise’ put that issue beyond doubt,” Fulton said. “That is of absolutely critical importance,” he added.

The Bank of England has yet to comment on the case.

It holds roughly 400,000 bars of gold worth more than 200 billion pounds ($250 billion) in its vaults under the City of London and is the second largest keeper of gold in the world after the New York Federal Reserve, according to its website.

The dispute over Venezuela’s gold began in May 2018 when Maduro secured re-election in a vote the opposition coalition boycotted and called a sham. Afterwards, Boris Johnson, then the British foreign minister, said: “We may have to tighten the economic screw on Venezuela.”

Concerned by mounting U.S. sanctions against the Maduro government, the BCV subsequently told the BOE it wanted to bring home 14 tonnes of gold it had stored there.

Around the year’s end, Calixto Ortega, the BCV president, travelled to London to discuss the move with BOE officials, according to Sarosh Zaiwalla, a London-based lawyer representing the BCV.

In its latest claim, the BCV has changed tack. It says that the funds from a sale would be funnelled into the United Nations Development Programme (UNDP) and be used to buy medicine and equipment to combat the COVID-19 crisis.

The opposition alleges Maduro wants to use the gold to pay off his foreign allies, which his lawyers deny. Over the past two years, Maduro’s government has removed some 30 tonnes from its reserves in Venezuela to sell abroad for much-needed hard currency, according to people familiar with the operations and the bank’s own data.
#COVID-19  #Covid  #Coronavirus  #Boris Johnson
Add Comment