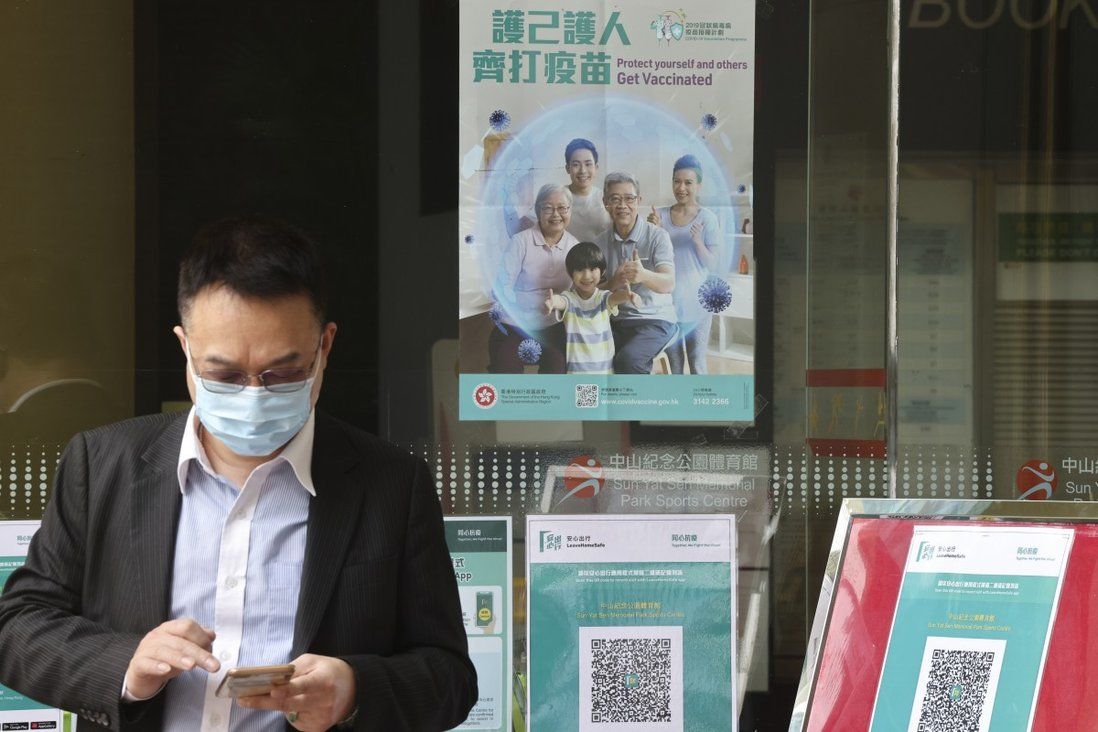 Security guard Mona Tsang* was distraught when her first grandchild was born in January and she could not be present for the birth.

Her elder son and daughter-in-law live in Guangdong, and the Covid-19 pandemic stopped her from going to be with them.

Eager to see her baby granddaughter, Tsang got herself vaccinated as soon as she could, receiving her shot of the Chinese-made Sinovac on March 30.

“I got vaccinated so that I can see my family,” says the 64-year-old, who is from the mainland and lives in Sham Shui Po with her younger son, an electrician.

Hong Kong residents have a choice of Sinovac or the German-made BioNTech vaccine. 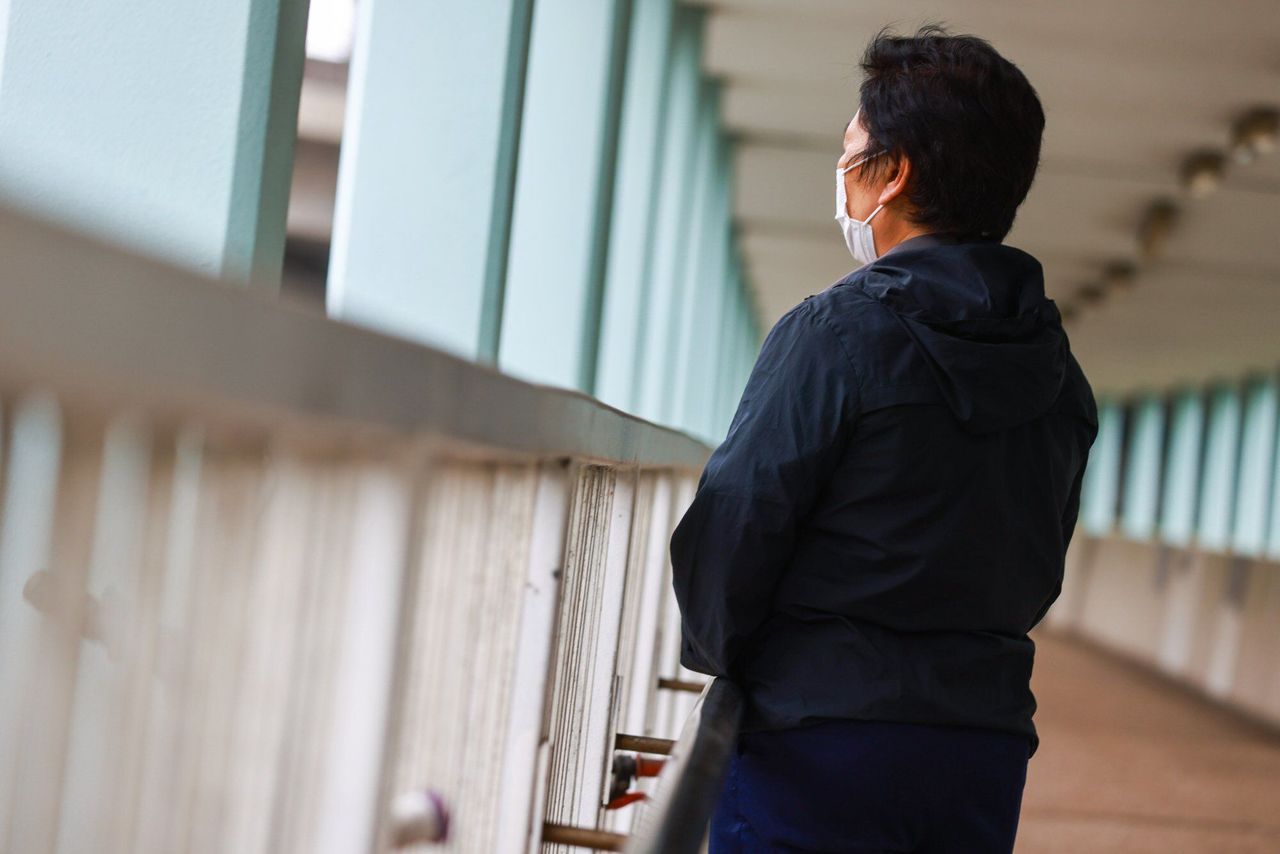 Mona Tsang* rushed to get vaccinated so she could visit her new granddaughter in mainland China.

The grandmother’s eagerness to get vaccinated is uncommon in Hong Kong, where many people are holding back from getting their jabs.

Since vaccinations began on February 26, only about 7 per cent of Hong Kong’s 7.5 million residents have had at least one jab.

Those who have gone ahead to get vaccinated include expatriates and others keen to travel for various reasons. Many others are adopting a “wait and see” attitude, saying they do not trust the government or have concerns about the safety of the jabs.

Experts warn that “vaccine hesitancy” is threatening the city’s goal of vaccinating 70 per cent of its population to achieve herd immunity, which will allow for a relaxation of social-distancing measures.

They say more needs to be done to encourage Hongkongers, especially young adults, to get vaccinated.

Ben Cowling, professor of epidemiology at the University of Hong Kong (HKU) School of Public Health, says: “Obviously if we can do vaccinations to get to herd immunity, we don’t need the public health measures any more. We can rely on vaccines to protect us against a surge in Covid cases.

“I think the attraction of going back to normal life should be one of the major selling points for mass vaccination.”

Some, like Tsang, are sceptical about BioNTech; others feel the same way about Sinovac. The vaccines’ touted efficacy – 62 per cent for Sinovac and 97 per cent for BioNTech – helped some decide, but others have been put off by reports about possible side effects.

Many do not see any urgency, as Hong Kong’s Covid-19 situation has become relatively stable.

Despite an abundance of vaccine supplies, Hong Kong lags behind countries such as Singapore and Israel in its take-up rate.

There have been setbacks. Vaccinations using BioNTech shots resumed this week following a two-week suspension due to packaging problems. The authorities also have had to reassure the public that several reported deaths among recipients of Sinovac – most of them chronically ill – were not related to the vaccine.

Nurse Ryan Liu, 32, chose BioNTech because of its higher efficacy rate and also because he believes it will make things easier when he and his wife, also a nurse, move to Australia, hopefully later this year.

They are awaiting approval of their five-year skilled work visas, and plan to have children in Australia so they will have citizenship in a place with more freedom.

“We want to move somewhere other than China, so we chose the vaccine from the West,” he says.

French hedge fund manager Charles Ricard*, 47, who chose the Sinovac vaccine, says he did not trust the newer technology used in developing BioNTech, whereas the Chinese vaccine uses a dead virus to help the body develop an immune response.

Ricard, who has lived in Hong Kong for 17 years, also opted for Sinovac as he hopes to relocate to mainland China. Under a new policy announced last month, foreigners entering the mainland from Hong Kong will face less paperwork if they have had Chinese-made vaccines.

“If it helps me to travel to China faster, that is another good reason to do it,” he says. 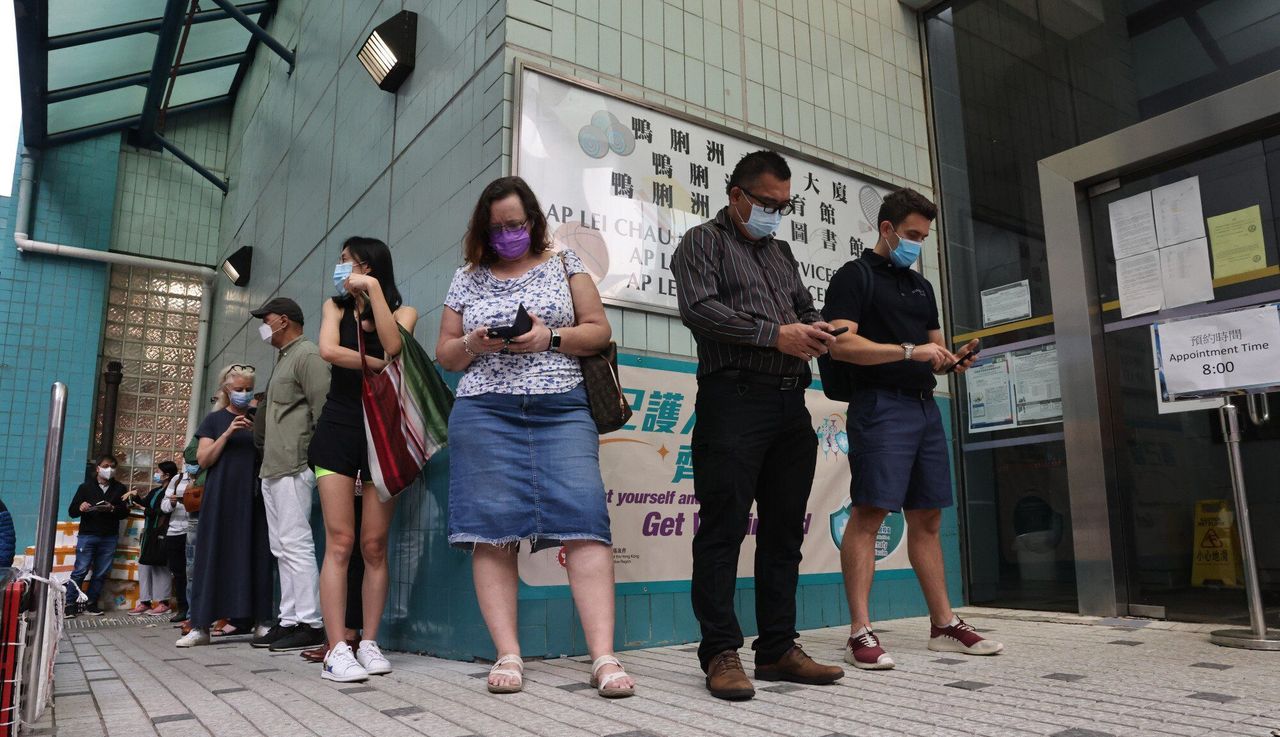 People's travel plans appear to play a part in whether they get vaccinated, as well as in their choice of jab.

Financial planner Grace Ng, 40, says she will not get vaccinated unless it becomes compulsory.

While accepting that the vaccine will protect her against the coronavirus, she feels uneasy about the speed with which the vaccines were developed and the lack of studies of possible long-term effects.

She says that if her work requires her to get vaccinated to travel for business, she will get the jab. But with no plans to travel for leisure any time soon, she does not want the vaccine.

“If I get sick, I prefer to take medicine to get better,” adds Ng, who is single and lives in Kowloon with her parents, who are in their 70s and have not been vaccinated either.

Retail worker Celine Wong, 35, also has no plans to leave the city and feels no urgency to get vaccinated as Covid-19 cases remain low in Hong Kong.

She suspects the government has not been transparent enough about the possible long-term effects of the vaccine.

“Maybe I’ll take it in a year when there are more scientific reports,” says Wong, who is single.

Wong is not alone. An HKU survey of about 1,000 Hongkongers in January found less than half were willing to receive Covid-19 vaccine shots, down from 63.2 per cent last November.

Esther Chan, of First Draft, a misinformation research organisation that aims to help people build resilience against harmful, false and misleading information, says the vaccine hesitancy in Hong Kong may be linked to local media headlines that focus on adverse reactions to vaccines.

“The problem is when media headlines focus on side effects or adverse reactions, these are shared, liked and retweeted on social media, and that will be the focus among people getting their information online,” Chan said. 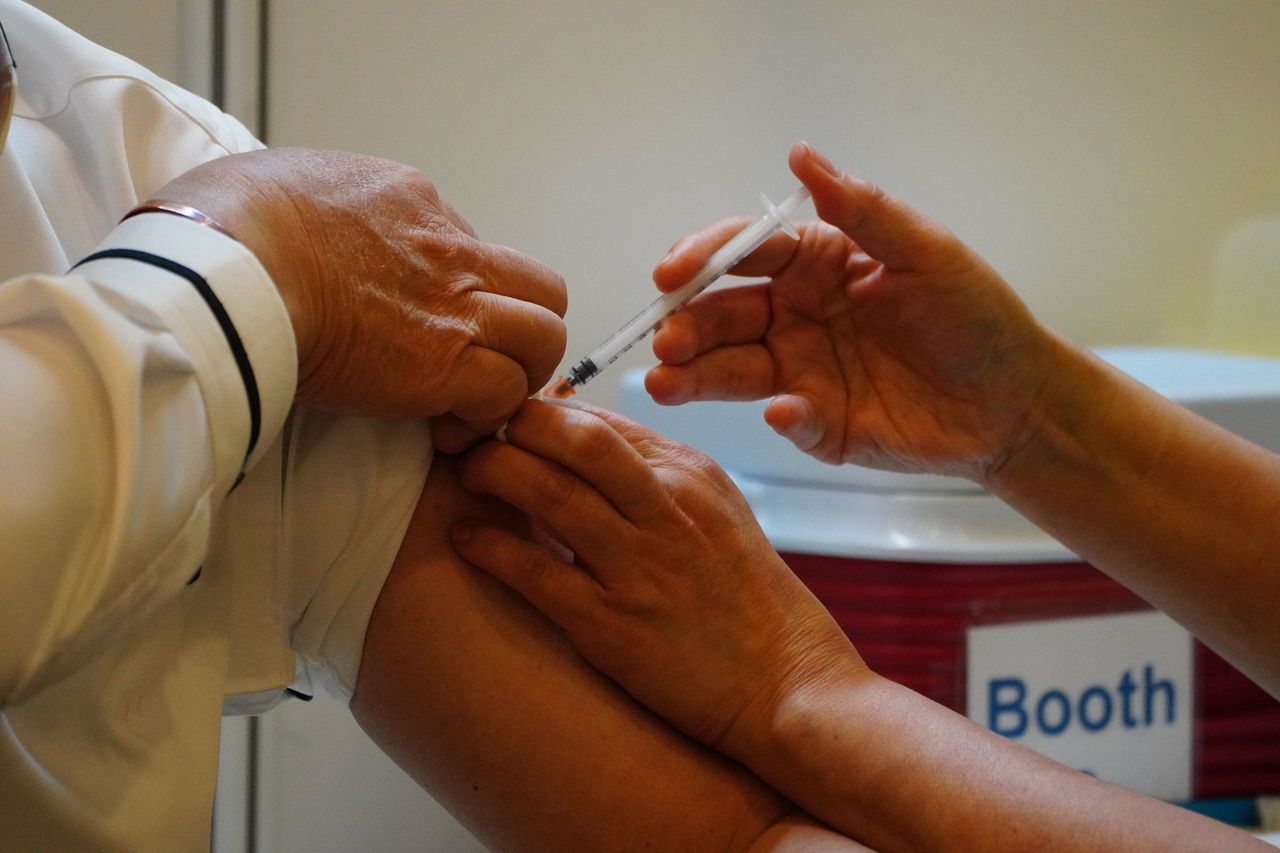 A general practitioner in private practice, Dr Sarah Borwein, says focusing on every post-vaccine death or adverse effect is counterproductive, because the overwhelming majority turn out to have nothing to do with the vaccine.

“Every time there is a headline proclaiming that someone died of a heart attack after having a vaccine, that forms an idea in people’s heads that is hard to shake – that the vaccine must be to blame. In reality, that is extremely unlikely,” she says.

“It is easy to scare people but it’s harder to ‘unscare’ them.”

She says there has been a high take-up rate among expatriates partly because they want to travel, and also as they have seen their relatives overseas get their jabs. 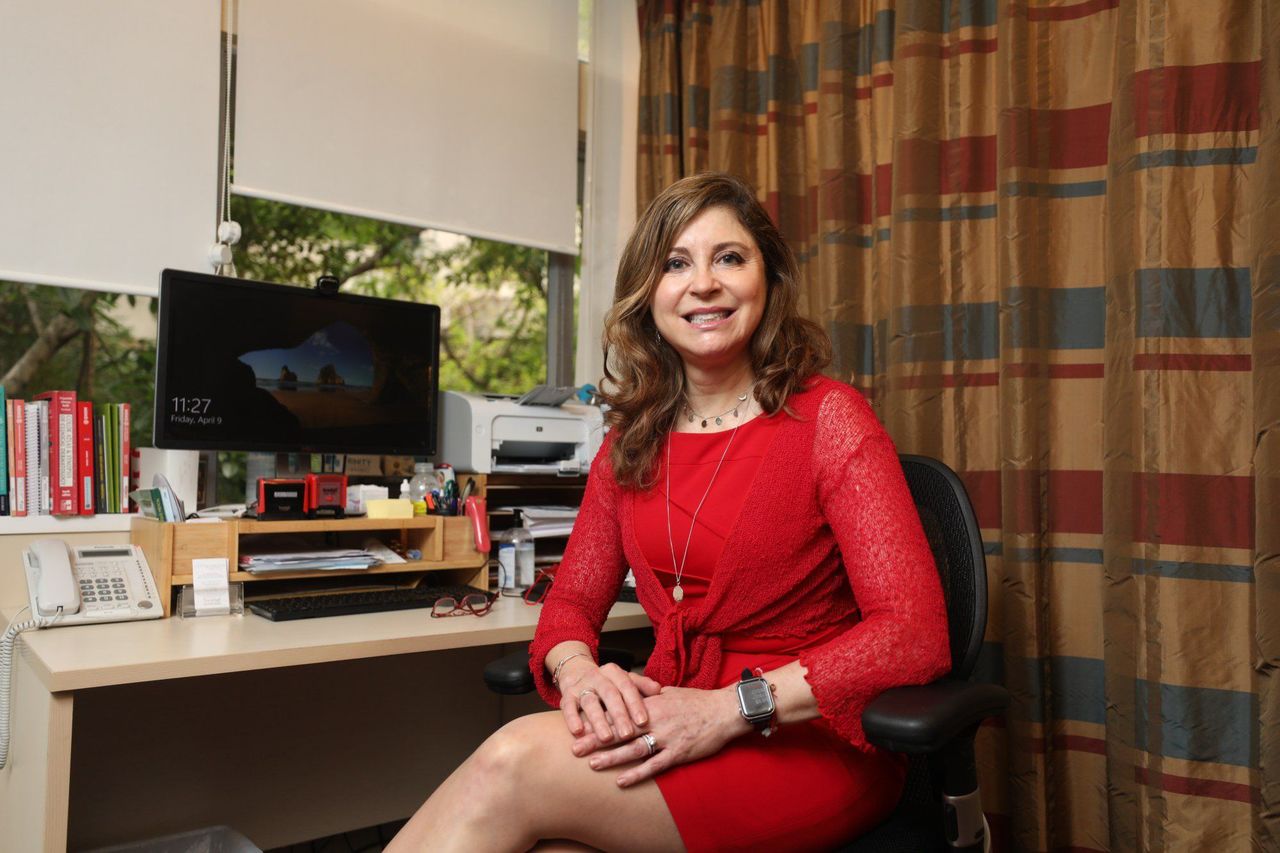 Borwein hopes that as people in Hong Kong see others getting vaccinated, they will become more comfortable with getting their jabs too.

Epidemiology professor Cowling believes the vaccine hesitancy is related to a perceived low risk of infections, concerns about potential side effects and uncertainty about the benefits in terms of the easing of social-distancing and quarantine measures.

Hong Kong authorities have not set a timetable for achieving herd immunity, but hope most people will be vaccinated by the end of the year.

Cowling hopes the possible benefits of getting vaccinated can encourage more Hongkongers, especially young adults, to get vaccinated.

“We need a clearer strategy to encourage vaccination uptake, including fewer restrictions on people who are vaccinated and the idea that as a community with a higher vaccine uptake we can get back to normal,” he says.

He says achieving the threshold of herd immunity through vaccinations is tough to achieve but possible in Hong Kong.

Grandmother Mona Tsang, for one, is looking forward to the day when border restrictions ease and she will be free to visit her granddaughter whenever she likes.

She says she has been encouraging her colleagues to get vaccinated, and tells them that she faced no issues after getting her jab.

“I really hope people get vaccinated,” she says.