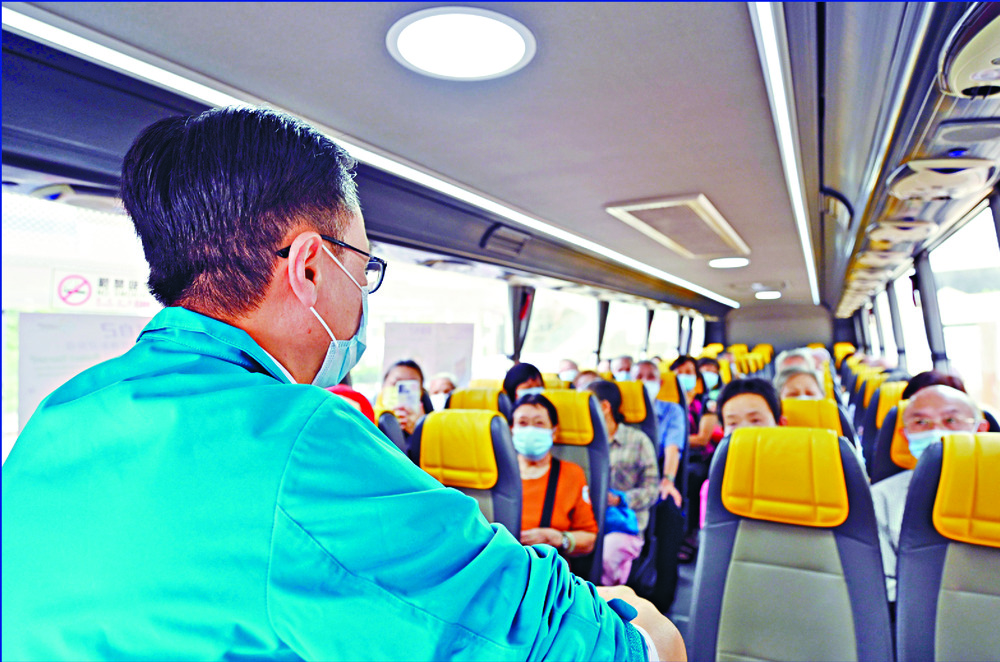 Vaccine drive for seniors gets boost

Sham Shui Po's elderly residents can be bused to a Covid-19 vaccination center for Sinovac shots until next Wednesday, in the latest drive to boost vaccine uptake among elderly citizens.
The service commenced yesterday at Fu Cheong Estate, where around 20 seniors registered on-site and boarded the buses to the vaccination center at Kwun Chung Sports Centre on Bowring Street, Jordan.

Apart from Fu Cheong Estate, elderly residents at Hoi Tat Estate, Hoi Lai Estate and Hoi Ying Estate in the district can also be driven to the vaccination center in the week-long drive. Some 50 seniors have registered as of yesterday.

One elderly man said he had been wanting to get vaccinated but could not go to the centers on his own due to his weak legs.

Another resident said: "[The vaccine shuttle bus] arrangement is good. I would not be getting the jab now if there was no shuttle bus for us."

Another elderly woman said although she still has doubts about getting the jab given that her blood sugar levels are unstable, she still took the bus to consult the medical staff at the center.

Speaking at the service's opening ceremony, Secretary for the Civil Service Patrick Nip Tak-kuen said the city has reached an overall coverage of nearly 68 percent for those who have had one dose. But among elderly people above 80, only 15 percent have been inoculated with at least one dose.

He hoped such convenient measures will ease seniors' worries and boost the age group's vaccination rate.

On the possible rollout of booster shots, an expert from the government's vaccine panel said the German-made BioNTech vaccine may be the better option for a third jab - even for those who have taken the mainland-made Sinovac jab for their first two doses, as it has a higher efficacy against the highly infectious Delta variant.

Ivan Hung Fan-ngai from the University of Hong Kong said his team is doing research to offer the BioNTech shot as a booster to immunocompromised people.

"People with compromised immune systems need vaccines with higher efficacy. But that doesn't mean the Sinovac vaccine is useless. It can also be used as a booster shot," Hung said.

He said people who have received both jabs may see their antibody level drop six months after getting the second jab.

But antibodies produced by Sinovac vaccines fell faster than those produced by BioNTech jabs, Hung said, adding people receiving Sinovac jabs have a more urgent need to get a booster shot, while those who took BioNTech can wait until next year.

Meanwhile, HKU infectious disease expert Ho Pak-leung said the flu virus has reemerged in western countries including the United Kingdom, the United States and Canada. He worried that the virus could spread in the SAR.

Ho warned that the flu virus can spread easily among children, who can further spread flu to their family members, and urged students to receive the vaccine.

He also advised elderly citizens to complete the Covid-19 vaccination first, and get the flu jab before mid-December.