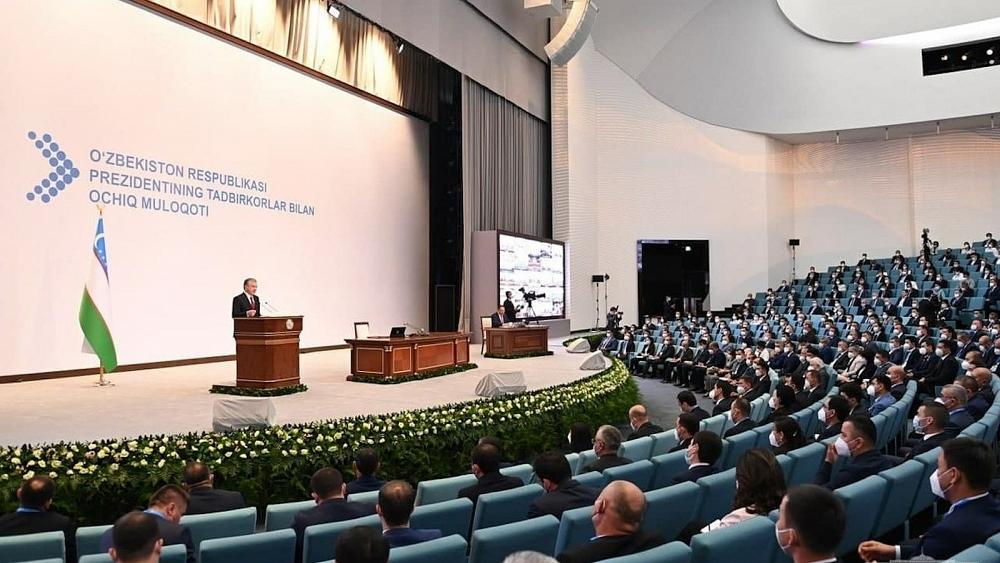 In a major national event held physically in Tashkent and virtually across the country on August 20, Uzbek President Shavkat Mirziyoyev talked to around 10,000 entrepreneurs, addressing concerns and laying out plans for a root and branch reform of business and tax regulations.

The Central Asian republic has been slowly transitioning to a market economy since Mirziyoyev took power in 2016. An overhaul of economic policy has seen inflation reduced and the currency stabilised, attracting overseas investment and boosting job creation.

As a result, the number of new business owners has almost tripled, and previously established businesses have expanded across the country. Small and medium-sized enterprises (SMEs) have become a major driver behind Uzbekistan’s remarkable economic growth, which has defied the challenges of the pandemic.

SMEs already employ around 78 per cent of the nation’s workforce and contribute 57 per cent of Uzbekistan’s GDP.

“The private sector accounts for 90 percent of the jobs created annually in the country,” said Mirziyoyev, in a speech at the event. “The fact that it now employs more than five million people, mainly young people, testifies to its growing role not only in the economic, but also in the social life of the republic.”

Traditionally, the country has relied on substantial exports – particularly of cotton, gold, gas and oil – to keep the economy afloat, but Mirziyoyev's vision for the future will see a much broader diversification.

The country is moving away from the export of natural gas, for example, and there has been major investment in downstream processing intended to generate feedstock for clusters of value-adding manufacturing.

Drivers for the economy include an IT park in Tashkent, where SMEs can make use of tax breaks designed to free up capital for investment. Early-stage start-ups can also take advantage of the park’s incubator.

Education is also a key priority, and one of the challenges faced by the country is to expand the pool of talent in order to attract foreign investment.

Oiling the wheels of growth

Defying the challenges brought about by the COVID-19 pandemic, the government has continued to adopt or adapt a raft of regulations. Over the last five years, around 2,000 laws, decrees and resolutions have been drafted to help small businesses.

Strides have been made in abolishing unnecessary red tape, and procedures have been simplified. Inspections have been brought down to the minimal levels necessary, and restrictions governing currency and raw materials have been lifted.

Mirziyoyev spoke about the need to improve in seven areas: business financing; the tax system; the procedures for land acquisition; development of infrastructure; support for export companies; the transport and logistics sector and to simplify business procedures.

Matters related to business financing made up almost half the concerns of entrepreneurs invited to send in their queries. Many called for a solution to high-interest loans on prohibitively short timescales. Loans in foreign currencies were seen as particularly problematic, given the fluctuations of the exchange rate.

In order to address this, the Ministry of Finance is creating a loans system in local currency, and banks will next year receive US$600 million from the Fund for Reconstruction and Development on Market Principles.

Taxation, too, has seen some beneficial changes for those creating businesses. Among other improvements, taxable income will take expenditure into account, and the process for VAT refunds will be speeded up.

In a nod to the difficulties of the last 18 months for the hospitality sector, restaurants will be made exempt from property taxes, and hotels will see a two-year break from tourist taxes.

A major headache for any post-Soviet economy is land distribution, and various measures have been introduced to address this. The regulations around sale and purchase have been tightened, with agricultural land leased on the basis of open tender and non-agricultural land sold through auction.

Other announcements welcomed by attendees at the event included state-guaranteed provision of electricity, water, gas and road infrastructure for large projects; preferential loans for export companies; and continued subsidies for railway networks.

The conference provided a hugely successful way for business owners to communicate with those in power, and President Mirziyoyev plans to turn this into a regular event.

He has also proposed that August 20 should be named Entrepreneurs' Day.

“Together we have found practical solutions to many issues and problems,” he said. “Based on the topical issues you raised, and the specific proposals you made for their solution, we can see how the knowledge and level of our entrepreneurs have increased…today you are using completely different working methods and innovative approaches.”