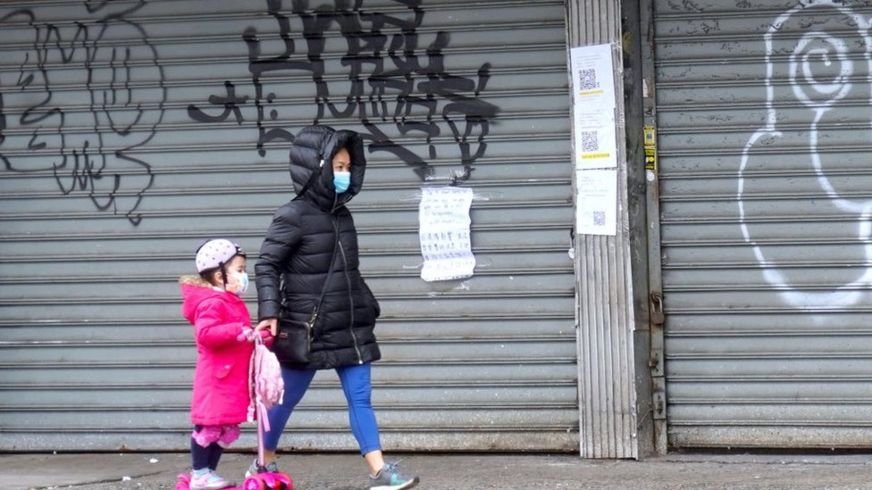 The new filings brought the total since mid-March to roughly 38.6 million - almost a quarter of the workforce.

The weekly figures have declined since peaking at almost 6.9 million at the end of March but remain high.

The number of people remaining on benefits also continues to grow.

Treasury Secretary Steven Mnuchin warned this week that the US risked "permanent damage" if the lockdowns continued.

All 50 states in the US have started to reopen but it is not clear whether simply easing restrictions will prompt activity to rebound.

In the week ending 16 May, about 2.2 million people sought unemployment benefits under the government's pandemic relief programme, which expanded eligibility to people such as gig economy workers.

Their numbers, which are reported separately from the regular figures, are likely to grow as more states implement the programme.

"This is so tragic it is almost unfathomable," Diane Swonk, chief economist at Grant Thornton, wrote on Twitter.

Add 2.2 m in PUI - self employed expansion to UI not counted in the initial UI data and the situation in mid May is even worse. This is so tragic it is almost unfathomable. https://t.co/K4hqde3OpA

Employers in the US cut more than 20 million jobs last month, sending the official unemployment rate to 14.7%, a sharp rise from 50-year lows of about 3.5% seen as recently as February.

Economists have warned that the rate is likely to worsen and remain elevated for several years.

While many of the unemployed said they believed their layoffs were temporary, a recent study estimated that more than 40% of recent pandemic job cuts are likely to be permanent.

Companies such as Uber are among the firms that have announced significant job cuts in recent weeks, as they prepare for a prolonged slowdown.

Retailers have also unveiled scores of permanent shop closures, with Victoria's Secret this week saying it would close some 250 locations in North America, with more expected.

"Overall there is little evidence that the reopening of the economy has, as yet, led to any sudden snap back in employment," said Paul Ashworth, chief US economist at Capital Economics.

Nearly half of US households have lost income since the pandemic lockdowns came into effect two months ago, according to a survey published Wednesday by the US Census. About 37% expect to lose income in the next month.

The effect on spending - which powers the US economy - has already been felt, with retail sales falling a record 16.4% in April, the Commerce Department reported last week.