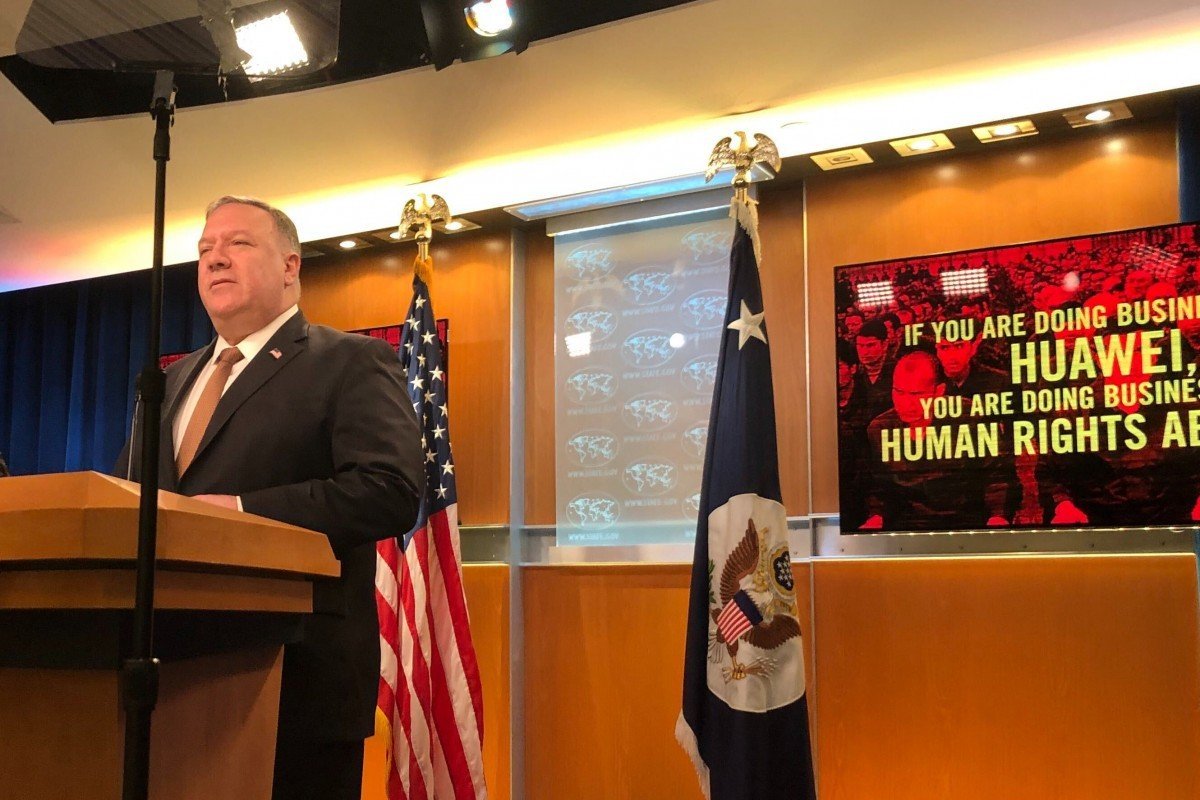 US State Department is targeting certain employees for their roles in enabling human rights abuses, says Mike Pompeo. The move puts further pressure on Huawei after Britain announced a plan to phase the company out of the UK’s 5G networks

The US government intends to place visa restrictions on certain employees of Chinese telecoms giant Huawei, putting further pressure on the company after Britain announced a plan to phase out usage of the company’s equipment from the UK’s 5G networks.

US Secretary of State Mike Pompeo said his department was targeting employees of Huawei and possibly other Chinese technology companies for their role in enabling human rights abuses at home and abroad, hammering at a theme that has guided his hardline stance against Beijing.

“The UK joins the United States and now many other democracies becoming … nations free of untrusted 5G vendors,” Pompeo said on Wednesday.

“The United States has a Huawei announcement of our own today,” Pompeo told reporters in Washington. “The State Department will impose visa restrictions on certain employees of Chinese technology companies like Huawei that provide material support to regimes engaging in human rights violations and abuses globally.”

Pompeo made the remarks a day after President Donald Trump signed the Hong Kong Autonomy Act and an executive order that will remove the city’s preferential trade status. The order followed Pompeo’s official determination in May that China has undermined Hong Kong’s autonomy to a degree that required a policy response.

The autonomy act requires “mandatory sanctions” against any foreign individual for “materially contributing” to the violation of China’s commitments to Hong Kong under the Sino-British Joint Declaration and the Basic Law, the city’s mini-constitution. The Joint Declaration prescribed that the city would enjoy a “high degree of autonomy” until at least 2047.

Washington had already revoked Hong Kong’s preferential access to export licence exemptions, cutting the city off from sensitive technology shipments from the US in response to China’s controversial national security law for the city.

Pompeo did not specify which employees, or which type of employee, the restrictions are targeting, owing to “confidentiality that we place around the visa process”, State Department spokeswoman Morgan Ortagus said in an interview.

The abuses that Pompeo was referring to include internment camps in China’s Xinjiang Uygur Autonomous Region (XUAR), “but certainly not limited to that ... the company or the entity could be involved in human rights abuses outside of China, and these visa restrictions would still be applicable”.

Ortagus added that family members of the targeted employees would face the same restrictions.

British Prime Minister Boris Johnson’s decision to ban Huawei from his country’s 5G networks follows escalating tension between London and Beijing, amid pressure from Washington to make the move.

Pompeo argued that US government pressure was not the primary reason for Johnson’s decision, attributing the move to conclusions reached by national security reviews carried out by the UK.

“They did this because their security teams came to conclude same conclusion that ours have, that you can't protect this information,” Pompeo said. “Information that transits across these untrusted networks that are of Chinese origin will almost certainly end up in the hands of the Chinese Communist Party.”

Canada is the only member of the so-called Five Eyes intelligence consortium – also made up of the United States, Australia and New Zealand – yet to block Huawei on security grounds from at least part of its high-speed 5G internet infrastructure.

While Canada has not moved against Huawei as decidedly as the other four have in terms of equipment bans, the country is playing a lead role in the detention of the telecoms giant’s CFO Meng Wanzhou, who is in the midst of hearings in Vancouver meant to decide whether Canadian authorities will hand her over to the US.

The US wants Meng, who is also the daughter of Huawei founder Ren Zhengfei, to face trial on fraud charges in New York. Meng was arrested by Canadian police at Vancouver’s international airport in 2018, acting on a US warrant, infuriating Beijing.