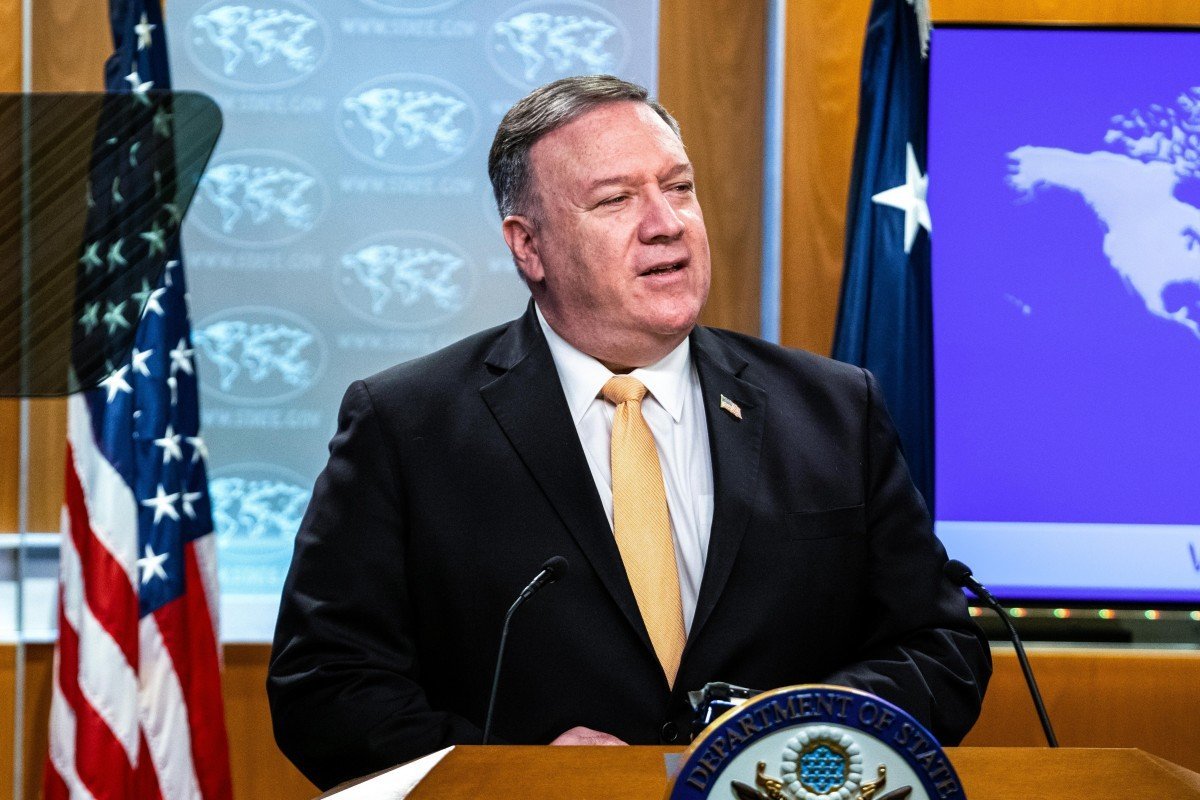 The US, Britain, Australia and Canada call on China to honour the Sino-British Joint Declaration in a statement. The four foreign ministers say the national security law would undermine the ‘one country, two systems framework’

The US has stepped up diplomatic pressure against China’s move to impose a national security law on Hong Kong, forming a common position with the UK, Australia and Canada.

In a four-nation statement, US Secretary of State Mike Pompeo and his counterparts called on China to work with Hongkongers on forging a way forward to honour its commitments made under the Sino-British Joint Declaration.

“It also raises the prospect of prosecution in Hong Kong for political crimes, and undermines existing commitments to protect the rights of Hong Kong people,” they said.

Issued hours after China’s National People’s Congress nearly unanimously endorsed the law, the statement by the four countries asked Beijing to work things out with Hongkongers.

“As Hong Kong’s stability and prosperity are jeopardised by the new imposition, we call on the government of China to work with the [Hong Kong government] and the people of Hong Kong to find a mutually acceptable accommodation that will honour China’s international obligations under the UN-filed Sino-British Joint Declaration,” the statement said.

It did not mention what action might be taken should China fail to do so.

State Department spokeswoman Morgan Ortagus said in an interview on Thursday that the US continues to confer with other allies in a bid to garner more countries to speak out against China’s toughening stance toward Hong Kong, although she did not cite specifics.

In response to Beijing’s assertion that the new law targets “a very narrow category of acts that seriously jeopardise national security and has no impact on Hong Kong’s high degree of autonomy”, Ortegus said the US obviously disagrees.

“We will continue to look for ways that we can support the people of Hong Kong and support these protests,” she said. “But if the Chinese Communist Party thinks that they’re going to continue to break their promises to the world, to openly defy the rule of law, the United States of America is going to stand up and tell them no.”

The Thursday statement came a day after Pompeo told Congress that Hong Kong no longer enjoyed a high degree of autonomy, an assessment that paved the way for further action, including tariffs, sanctions and visa treatments.

Beijing has said the joint declaration, reached between UK Prime Minister Margaret Thatcher and Chinese premier Zhao Ziyang in 1984, was no longer valid since Hong Kong’s handover of sovereignty in 1997.

The European Union, which is not part of the four-country statement, insisted that it had been in dialogue with US, UK, Australia and Japan to discuss issues about Hong Kong All 27 EU foreign ministers will discuss the situation on Friday in a scheduled meeting. They will also discuss future EU-China relations.

New Zealand, the other country of the Five Eyes security alliance, did not join the statement.

Analysts said they expect the EU parliament to, at a minimum, sign on to Thursday’s joint statement.

“The challenge is to lay out steps to a solution,” said Michael Davis, a research scholar at Columbia University and former University of Hong Kong law professor. “China has been quite expert at playing countries in Europe against each other under a united front strategy. Whether those countries will find common ground will be the challenge.”

Analysts said Thursday’s joint statement shows the four signatories are in agreement on calling out Beijing for violating commitments it made to the UK and the global community over Hong Kong’s future, and on voicing concern over civil liberties and autonomy in the city. But there is little indication of multilateral concrete steps.

“The joint statement does not suggest any consequence,” Davis added. “So at this point it is a gentle nudge for Beijing to pause and consider the concerns being raised by Hong Kong people and the international community.”

China's proposed national security law for Hong Kong is in direct conflict with its obligations under the Joint Declaration. If enacted, this law would violate Hong Kong’s autonomy and freedoms. UK and 🇺🇸🇦🇺🇨🇦 are deeply concerned.
https://t.co/bbGgJgHklw pic.twitter.com/e7eQySFDFX

The US has threatened sanctions, tariffs, asset seizures and visa treatment. The UK has proposed immigration changes, announcing on Thursday that Hongkongers with British National (Overseas) passports will be offered a path to British citizenship if China enforces the national security law in the city.

However, it is not clear that Beijing cares much about Hong Kong residents who chose the special BN(O) status. prior to the 1997 handover.

With US-China diplomatic channels badly clogged by mistrust, analysts say the two economic giants are signalling through the press and their actions as they try to assess each other’s position.

“What I’m hoping is that our policymakers will take into consideration the benefits, the values, of the Hong Kong people,” he added, speaking at an event co-sponsored by Concordia and the China General Chamber of Commerce.

The usually partisan US Congress is almost unanimously in favour of taking a tougher line on China, which points to President Donald Trump enacting some sort of punitive measures against Hong Kong in a US election year.

“Hong Kong is so much part of the vitality of trade and commerce that goes into mainland China, you would think that they would want that vitality to continue. But President Xi is a very oppressive tyrant,” she added.

Trudeau has tried to improve relations after Canada’s 2018 arrest of Huawei executive Meng Wanzhou at the request of US authorities and Beijing’s arrest days later of two Canadians living in China, a move widely seen in Canada as retaliatory hostage-taking.

The Canadian prime minister from the Liberal Party now faces growing calls for action against China, particularly from the opposition Conservative Party, Hampson said, as well as others “who say we should never do business with China, it’s an autocratic regime, whose values are completely antithetical to Canadian values”, he added.