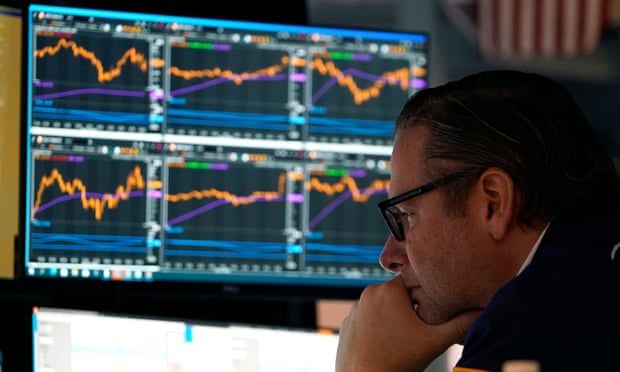 US stock markets fall sharply as investors worry about recession

All of the major US markets fell sharply, with the S&P closing down 4%, its largest fall since June 2020, and the tech-heavy Nasdaq losing 4.7%.

On Tuesday markets had rallied following positive news about consumer spending and signs that China was relaxing its strict Covid-19 lockdowns. Just a day later concerns about an economic slowdown triggered a wide-ranging sell-off.

The sell-off began after Target said supply chain costs and inflationary pressures had cut into its profits and customers were buying fewer higher-margin items such as kitchen appliances, televisions and furniture.

The retailer’s announcement came a day after Walmart said its profit had also been hit by higher costs. The latest news from Target led to a sell-off for retailers including Amazon, BestBuy, Costco and Dollar General.

Investors are increasingly concerned that rising inflation, and the Federal Reserve’s plans to tackle it by sharply hiking interest rates, will trigger a recession.

The concerns are affecting markets all over the world with the ASX200 in Sydney dropping 1.75% on Thursday in the wake of the Wall Street action. Stocks in Tokyo, Hong Kong and Seoul were all braced for losses later in the day.

Target’s management expects inflation to add $1bn to its fuel and freight costs this year and sees little sign of those costs easing throughout 2022. Gas prices topped $4 a gallon in every state this week for the first time.

“Throughout the quarter, we faced unexpectedly high costs, driven by a number of factors, resulting in profitability that came in well below our expectations, and well below where we expect to operate over time,” said Target’s chief executive, Brian Cornell.

The sell-off was broad-based. Tech companies including Apple, Meta and Tesla fell sharply, as did the makers of household goods and grocery stores including Kroger and Procter & Gamble. General Motors and American Airlines fell along with banks including JP Morgan and Goldman Sachs.

Stocks have been struggling to pull out of a slump over the last six weeks as concerns pile up for investors. Trading has been choppy on a daily basis and any data on retailers and consumers is being closely monitored by investors as they try to determine the impact from inflation and whether it will prompt a slowdown in spending. A bigger than expected hit to spending could signal more sluggish economic growth ahead.

The Fed is trying to temper the impact from the highest inflation in four decades by raising interest rates. On Tuesday, the Fed chair, Jerome Powell, told a Wall Street Journal conference that the US central bank will “have to consider moving more aggressively” if inflation fails to ease after earlier rate hikes.

Investors are also concerned about global growth as Russia’s invasion of Ukraine puts even more pressure on prices for oil and food while lockdowns in China to stem Covid-19 cases worsens supply chain problems.

The United Nations is significantly lowering its forecast for global economic growth this year from 4% to 3.1%. The downgrade is broad-based, which includes the world’s largest economies such as the US, China and the EU.
#COVID-19  #Covid  #Tesla
Add Comment