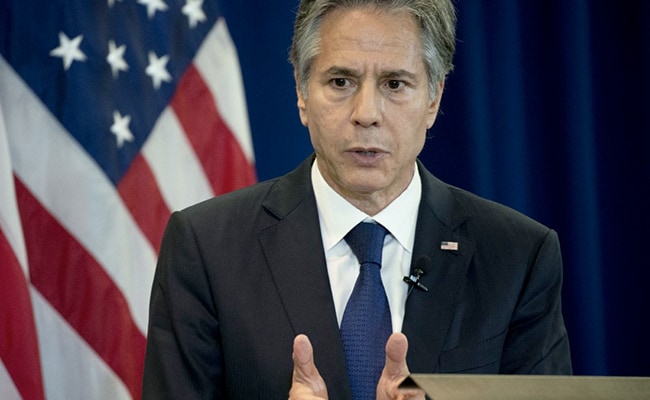 US Says China Has Rejected Status Quo On Taiwan

Antony Blinken's remark came after Chinese President Xi Jinping secured a historic third term and Taiwan predicted intensifying pressure on the diplomatic front.
US Secretary of State Antony Blinken said Wednesday that China has rejected the longstanding status quo on Taiwan, reiterating an assessment that Beijing is speeding up its timeline to take the island.

Blinken said that the four-decade status quo -- in which the United States recognizes only Beijing but offers the island weapons for its own defense -- has "helped to make sure there wouldn't be a conflict between the United States and China over Taiwan."

"What's changed is this -- a decision by the government in Beijing that that status quo was no longer acceptable, that they wanted to speed up the process by which they would pursue reunification," Blinken told an event at Bloomberg News.

China has decided on "coercion and making life difficult in a variety of ways on Taiwan in the hopes that that would speed reunification, but also holding out the possibility, if that didn't work, of using force to achieve their goals," Blinken said.

Blinken, who gave a similar assessment in a recent appearance at Stanford University, pointed to Beijing's deployment of forces and major military drills in August following a visit to Taiwan by US House Speaker Nancy Pelosi.

The top US diplomat said the status quo has also allowed the flourishing of Taiwan, which has become the dominant global power in the manufacture of advanced semiconductors vital for cars, appliances and consumer electronics.

"If that were for any reason disrupted, it would have deeply significant consequences for the global economy," Blinken said.

Pressure on Taiwan "should be a concern for not just the United States, but for countries not only in the region, but around the world," he said.

Beijing has vowed to take control of self-ruling Taiwan, where the mainland's defeated nationalists fled in 1949 but which has since flourished into a vibrant democracy.

The United States switched recognition from Taipei to Beijing in 1979 and now just 14 nations recognize Taiwan.

"It is conceivable that our diplomatic situation will become grimmer," Wu said.
Add Comment