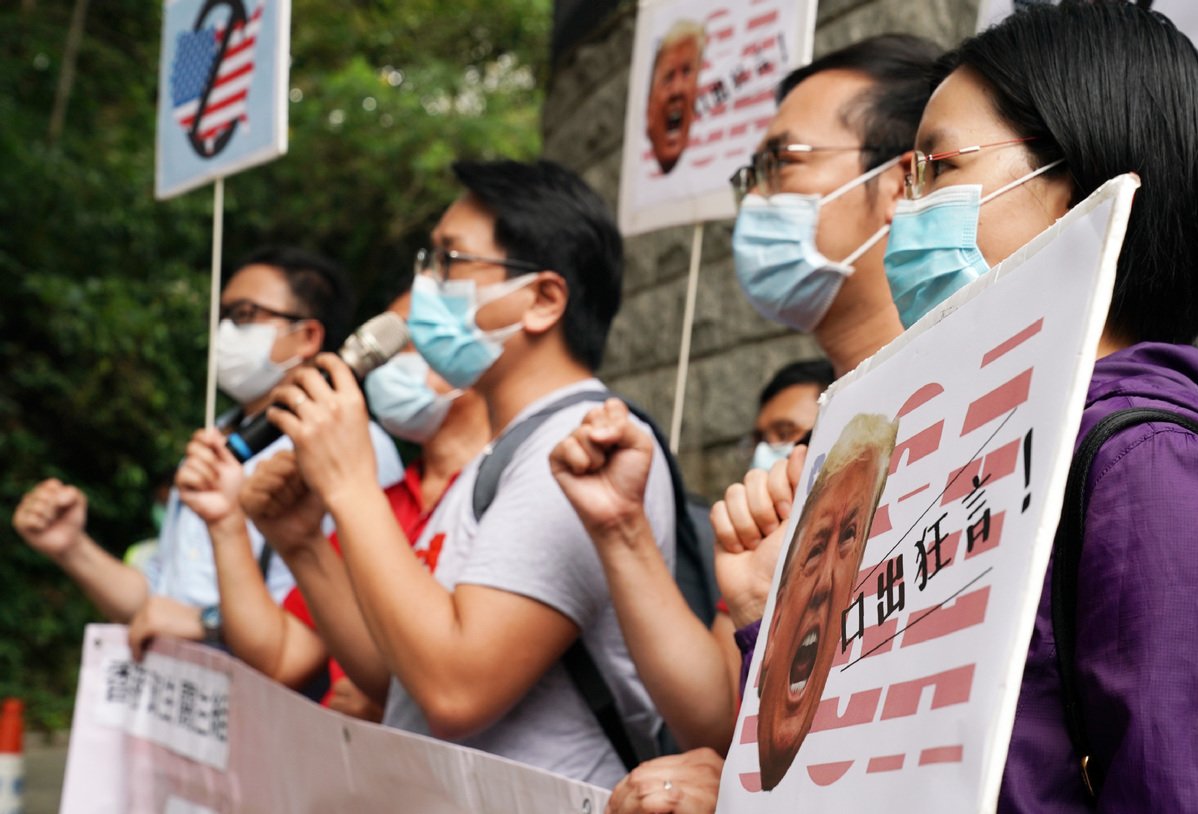 The Hong Kong and Macao Affairs Office of the State Council strongly condemned the United States on Monday for imposing sanctions on Hong Kong and some US politicians for their verbal attacks on the special administrative region's autonomy.
US President Donald Trump announced last week that Hong Kong's preferential trade status will be revoked after US Secretary of State Mike Pompeo claimed that Hong Kong no longer enjoyed a high degree of autonomy from China due to the upcoming national security legislation for the SAR.

These remarks about Hong Kong are a complete lie and slander, said a spokesperson for the office.

The adoption of the decision to introduce national security legislation in Hong Kong by the National People's Congress, the country's top legislature, is to prevent, stop and punish acts and activities that endanger State security, according to the office.

The decision will in no way undermine Hong Kong's high degree of autonomy and the rights and freedoms enjoyed by local people. On the contrary, it will strengthen the foundation of "one country, two systems" in the SAR, it said.

The US authorities are not in a position to comment on China's internal affairs. On the contrary, some politicians bear a great responsibility for the grim situation in Hong Kong today, said the spokesperson.

"Some US politicians who are hostile to China and afraid of China's growth are backing up and providing protection for the radical separatist forces in Hong Kong," said the spokesperson, adding that it proved how necessary, important and urgent it is to establish and improve the legal system and enforcement mechanisms for safeguarding national security in the SAR.

"The future of Hong Kong is in the hands of the 1.4 billion Chinese, including Hong Kong compatriots. The central government will safeguard Hong Kong's security and support its development, and stand ready to respond to any act that undermines Hong Kong's prosperity and stability," the spokesperson added.

The central government's liaison office in Hong Kong on Monday also slammed the US decision to sanction Hong Kong over the national security legislation, saying it is a brazen act of hegemony.

The move will only harm American people's interests in the special administrative region and can't stop the SAR from achieving greater development, said a spokesperson for the Liaison Office of the Central People's Government in the HKSAR.

The spokesperson stressed in a statement that all sovereign states are empowered to safeguard national security, thus the related legislation for Hong Kong is China's own affair.

The spokesperson urged the handful of Hong Kong people who have been calling for US intervention to realize the country's double standard in handling national and international affairs. "They should wake from their dream," said the spokesperson.

Meanwhile, the spokesperson pointed out that the city's status won't be affected by the US move.

Hong Kong's role as a separate customs territory is not granted by individual countries, but recognized by the World Trade Organization, the spokesperson stressed.

Given that the US has tremendous business interests in Hong Kong, the spokesperson said the US would be "shooting itself in the foot" by imposing sanctions on the city.

According to US statistics, from 2009 to 2018, the aggregate trade surplus that the US had with Hong Kong reached $297 billion.

More than 1,300 US companies operate in Hong Kong, half of which have headquarters or an office in the city.
#Donald Trump
Add Comment