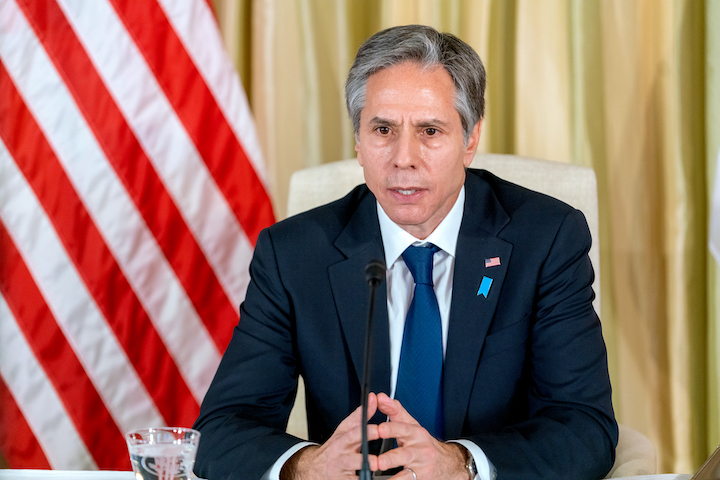 US sanctions Hong Kong and Chinese officials ahead of Blinken meeting

Washington has sanctioned 24 Chinese and Hong Kong officials over Beijing’s ongoing crackdown on the city, ahead of US Secretary of State Antony Blinken’s meeting with top Chinese diplomats in Alaska later this week.

The sanctions were introduced under the Hong Kong Autonomy Act (HKAA), which was passed by the United States last year in response to the imposition by Beijing of a new national security law in Hong Kong that bans secession, subversion and collusion with foreign forces.

Among those sanctioned are Wang Chen, a member of the 25-person Politburo, one of China’s top lawmaking bodies, and Tam Yiu-chung, the only Hong Konger on the committee that drafted the national security law.

Many figures on the list released by the State Department Wednesday had previously been barred by the Trump administration from traveling to the US, along with their family members. Designation under the HKAA brings with it financial sanctions, which can include restrictions on banking, loans from US financial institutions, buying property or dealing with US entities.

Hong Kong’s leader Carrie Lam, who was previously sanctioned under the HKAA, has said the move effectively cut her out of the global banking system, forcing her to stockpile cash because banks will not do business with her.

In a statement, Blinken said the move was in response to new restrictions introduced by Beijing on democracy in Hong Kong, which will further restrict the right of people in the city to stand for election.

Those sanctioned include multiple senior members of the NPC, China’s rubber stamp parliament, and law enforcement officials in Hong Kong. A number of top police commanders were also sanctioned previously.

“This action further undermines the high degree of autonomy promised to people in Hong Kong and denies Hong Kongers a voice in their own governance, a move that the United Kingdom has declared to be a breach of the Sino-British Joint Declaration,” Blinken said.

“A stable, prosperous Hong Kong that respects human rights, freedoms, and political pluralism serves the interests of Hong Kong, mainland China, and the broader international community. The United States stands united with our allies and partners in speaking out for the rights and freedoms of people in Hong Kong, and we will respond when the PRC fails to meet its obligations,” he added.

Wednesday’s sanctions come as Hong Kong’s legislature is due to consider a new bill laying out a “patriotism” test for those standing for election, which is expected to limit most members of the traditional opposition. The bill is guaranteed to pass, as the legislature currently has no opposition members, since pro-democracy lawmakers resigned en masse in protest at the expulsion of several of their colleagues last year.